Some major intermediates derived from formaldehyde are chelating agents, acetal resins, 1,4-butanediol, polyols, methylene diisocynate. It is also used for the manufacture of wide variety of chemicals, including sealant, herbicides, fertilisers, coating, and pharmaceutical. Product profile of formaldehyde is given in Table M-VII 4.7.

Various industrial processes for manufacture of formaldehyde using silver and ironmolybdenum catalyst are given below:

Process diagram for manufacture of formaldehyde using silver and iron-molybdenum catalyst is shown in Figure M-VII 4.5 and Figure M-VII 4.6 respectively. 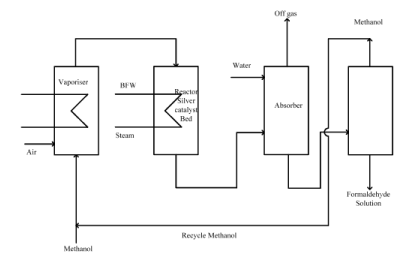 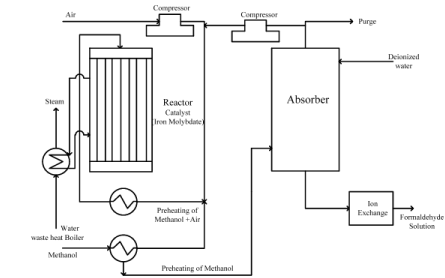 Chlorinated methanes, which include methyl chloride, methylene dichloride, chloroform and carbon tetrachloride, are important derivatives of methane and find wide application as solvents and as intermediate products. Product profile of Chloromethane is given in Table M-VII 4.12

There are two major routes for the manufacture of chloromethane:

Dimethyl formamide is one of widely used solvents in the manufacture of acrylic fiber. Because of its high dielectric constant, aprotic nature, wide liquid range and low volatility, dissolving power it is frequently used for as solvent.

Dimethyl formamide is made by following two processes:

It plays important role during and after World War II in providing feedstock for large number of organic chemicals when petrochemical industry was not well developed. Acetylene’s highly reactive triple bond provided a ready “handle” for chemists to grab onto for designing process chemistry Safety issues involved with handling of large volumes of acetylene and its expense are big problem with adoption of acetylene based processes. The process of acetylene requires much energy and is very expensive. of attractive petrochemical feedstock. Acetylene is still being used for manufacture of chemicals.

Acetylene from Cracking of Hydrocarbons: Cracking of hydrocarbons such as methane, ethane, propane, butane, ethylene, and natural gas can make acetylene. 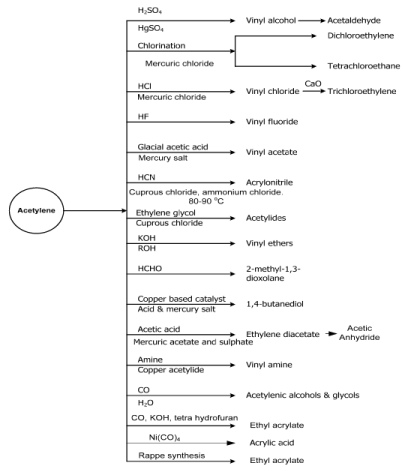