Organic compounds can have a variety of structures. These structures can be acyclic or cyclic. The cyclic systems containing only carbon atoms are called carbocyclic and the cyclic systems containing carbons and at least one other element are called heterocyclic. Though a number of heteroatoms are known to be part of the heterocyclic rings, the most common heteroatoms are nitrogen, oxygen or sulphur. A heterocyclic ring may contain one or more heteroatoms which may or may not be same. Also the rings may be saturated or unsaturated. Nearly half of the known organic compounds contain at least one heterocyclic ring. Many heterocyclic compounds occur naturally and are actively involved in biology e.g., nucleic acids (purine and pyrimidine bases), vitamins (Thiamine B1, Riboflavin B2, Nicotinamide B3, Pyridoxol B6 and Ascorbic acid C), heme and chlorophyll, penicillins, cephalosporins, macrolides etc. The study of heterocyclic chemistry is a vast and expanding area of chemistry because of their applications in medicine, agriculture, photodiodes and other fields. 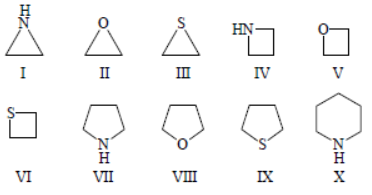 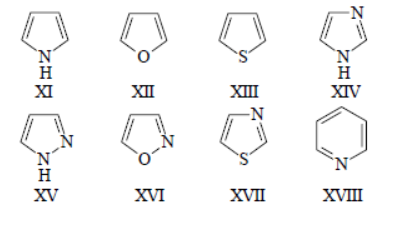 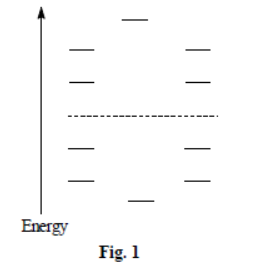 If the electro pairs are filled into the energy level pattern (Fig. 1), a closed-shell structure will result only when the number of electron pairs is odd (total number of electrons is 4n+2). However, if the number of electron pairs is even (total number of electrons is 4n), the last pair will occupy the degenerate orbital pair so that one electron is present in each degenerate orbital with parallel spins (Fig. 2 and 3). As a consequence, cyclic systems with 4n π electrons undergo deformation and lose the planarity and hence the extended conjugation. The difference of π energy calculated for an open chain CnHn+2 conjugated polyene and cyclic CnHn conjugated polyene is known as resonance energy. Therefore cyclic conjugated polyenes are aromatic if they are thermodynamically more stable than the corresponding open-chain analogs and it is antiaromatic if it is less stable. Molecules which show neither stabilization nor destabilization are known as non-aromatic. 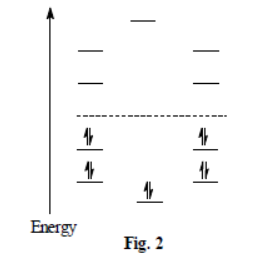 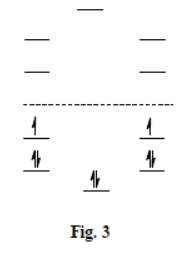 Pyrrole (XI), furan (XII) and thiophene (XIII) are the simplest of the five membered aromatic heterocyclic compounds having one heteroatom. Planar unsaturated heterocycles containing five atoms can be considered aromatic system if they have an uninterrupted cycle of p-orbitals containing six electrons in all. Pyrrole, furan and thiophene are examples of this type. In all these heterocycles, four carbon atoms and the heteroatom are sp2 hybridized. The p-orbital of each carbon atom contributes one electron and forms π-bond with adjacent carbon. The three σ-bonds of the sp2 hybridized heteroatom lie in the plane of the molecule. The third p-orbital, which is orthogonal to the plane of the atoms, contributes its lone pair of electrons. This p-orbital of the heteroatom with an electron pair interacts with other four p-orbitals of carbons resulting into a cyclic π electron system involving five p-orbitals and six π-electrons in three bonding molecular orbitals π1, π2 and π3. Therefore each of these compounds has three pairs of delocalized π-electrons. Two of the pairs are shown as π-bonds in the structure and one pair is shown as non-bonding electrons on the heteroatom. Hence these five sp2 hybridized atoms form planar six electron delocalized π-cloud, which is responsible for the aromatic character of these rings (Fig. 4). It can be seen from the

structures of furan and thiophene, which contain bivalent oxygen and sulfur respectively, that they have a second pair of non-bonding electrons also which is not involved in the π-cloud (Fig. 4).

The resonance structures of pyrrole show that nitrogen donates electrons to the ring (Fig. 5) and thereby increases the electron density of the ring. In fact introduction

of the heteroatom in the ring brings about splitting of π2 and π3 orbitals. This splitting of degenerate π2 and π3 orbitals can also be viewed as representing a partial localization of the lone pair on nitrogen. The calculated π-electron distribution of pyrrole is shown in Fig. 6. It is evident from the resonance structures given above and the data in Fig. 6 that the ring

system is electron rich since six electrons are distributed over five atoms. Therefore all the carbon atoms have greater π-electron density than benzene, which has equivalent resonance structures with no charge separation.

Similarly furan and thiophene are also aromatic in nature and can be represented by the similar delocalized structures as in pyrrole wherein one of the lone pairs on oxygen or sulphur contributes to the aromatic sextet. However, unlike pyrrole, the delocalization is not as extensive in furan because of high electronegativity of oxygen and so the lone pairs are held more tightly by the oxygen. Thiophene with the least electronegative heteroatom is regarded as aromatic and has the highest resonance energy whereas furan has the least resonance energy. All these heterocycles have lower resonance energies than benzene. The resonance energies of pyrrole, thiophene and furan are 88, 121 and 67 KJ/mol, respectively. Therefore, the order of aromaticity is

l these compounds undergo electrophilic substitution e.g., nitration, sulfonation, halogenation, Friedel-crafts reaction etc. characteristic of aromatic compounds. These are more reactive than benzene towards electrophilic substitution because of the increased electron density on each carbon in the ring. Therefore, the attack of the electrophile which is the rate determining step is more facile with these heterocycles. Unlike pyrrole, furan and thiophene do not undergo protonation. Pyrrole is an extremely weak base because its pair of non-bonding electrons are part of the π-cloud (Kb = 2.5 x 10-14). Therefore, if pyrrole is protonated, it loses its aromaticity as the non bonding electrons are no more available for delocalization to form the aromatic sextet. The number of five membered aromatic heterocycles is much larger than that of the six membered aromatic heterocycles. This is because one of the heteroatoms in the ring can be divalent and so more heteroatoms can be incorporated into the five-membered rings than six-membered rings. Pyrrole, thiophene and furan are colourless liquids and boil at 130°C, 84°C and 32°C respectively. High boiling point of pyrrole is due to hydrogen bonding between pyrrole molecules.

All six membered fully unsaturated heterocycles are related to benzene as these can be represented by replacement of one or more CH groups by a trivalent heteroatom. The simplest six membered aromatic heterocycle is pyridine (XVIII). Pyridine ring consists of five carbon atoms and a nitrogen atom. Pyridine is a planar molecule. The ring is a slightly distorted hexagon as the C–N bonds are shorter than C–C bonds. All the carbons and nitrogen are sp2 hybridized which form σ-bonds with adjacent atoms having ~120° bond angles. Each atom has a p-orbital orthogonal to the ring which undergoes delocalization to form 6π-electron cyclic loop (Fig. 7).

Pyridine has two uncharged resonance structures like benzene and three charged structures as shown in Fig. 8. Its resonance energy is 117 KJ/mol and the dipole

moment is 1.57 μ. The lone pair of electrons on sp2 hybridized nitrogen is responsible for the basicity of pyridine and it behaves like a tertiary amine. Pyridine is a stronger base than pyrrole as its lone pair is not involved in delocalization (Kb = 2.3 x 10-9). Its aromaticity is not affected by protonation unlike pyrrole which loses aromaticity upon protonation. The lone pair of nitrogen in pyridine is sp2 hybridized which is more electronegative than the sp3 hybridized nitrogen. Therefore pyridine is less basic than amines and anilines. Pyridine is less basic than its saturated analog piperidine (Kb = 2 x 10-3) because the lone pair of nitrogen in piperidine is sp3 hybridized and hence less electronegative than pyridine and more available for protonation. Heterocycles in which other benzenoid CH groups are replaced with nitrogen, also behave similarly. Pyridine is a colourless liquid which boils at 115°C.

Indole, benzofuran and benzothiophene are planar aromatics which contain 10π-electrons including the non-bonding electron pair of heteroatom as in monocyclic heterocycles. These 10π-electrons are delocalized over the ring. Because of the involvement of non-bonding lone pair of heteroatom in aromatization, it makes the 5-membered rings more prone to attack by electrophilic reagents.

Indole: Indole is a pleasant smelling solid which melts at 52°C and is used as a perfume base. It is a planar aromatic molecule with conjugated 10π-electrons contributed by eight carbon atoms and a lone pair contributed by nitrogen. Its resonance energy is 47-49 kcal/mol. Because of the involvement of lone pair of nitrogen, charge separated cannonical forms can be written for indole as shown in Fig. 9.

were originally isolated from coal tar. Quinoline is high boiling liquid (b.p. 237°C) and smells like pyridine while isoquinoline is a low melting solid (m.p. 26.5°C, b.p. 243°C). Both quinoline and isoquinoline are planar 10π-electron aromatic systems in which all atoms are sp2 hybridized and contribute one electron each in orthogonal p-orbitals for delocalization over the rings. 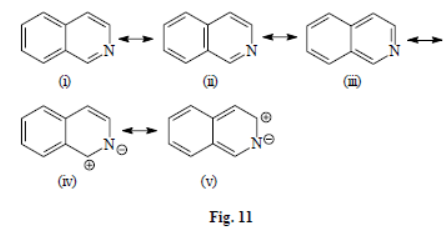