Reactions of Pyrrole, Furan and Thiophene

The attack of an electrophile on pyrrole, for example, will lead to formation of 2- and 3-substitution products by way of carbocations XXXI and XXXII, respectively (Fig. 12). The substitution occurs preferably at C-2 position because the Some typical examples of electrophilic substitution of pyrrole, furan and thiophene are given below (Fig. 12). 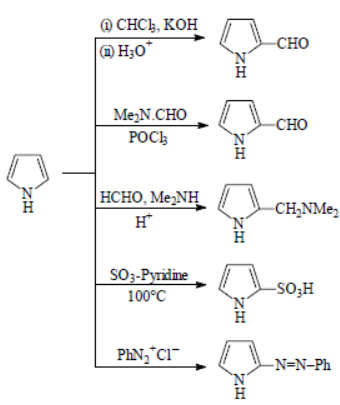 Both the Mannich reaction (reaction with Me2NH, H2CO and H+) and azo coupling fail with furan, showing its lower reactivity compared with pyrrole. (iii) Diels-Alder Reaction: Furan is least aromatic of the three heterocycles and therefore behaves as a diene in a number of Diels-Alder reactions (eq. 32). 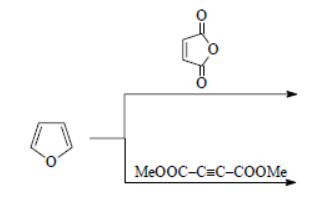 withdrawing group reduces the availability of nitrogen lone pair for the ring and so it behaves more like a diene. Pyrrole and N-alkyl pyrrole undergo Michael-type addition reactions (eq. 34).

(iv) Ring Expansion of Pyrrole: Pyrrole adds on dichlorocarbene generated in situ from chloroform and base to give a bicyclic compound which undergoes ring expansion to give 3-chloropyridine (Scheme 4). 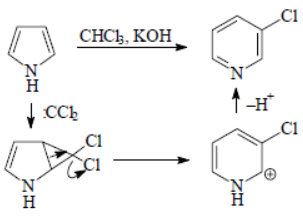 is highly deactivated (about million times) compared to benzene because the more electronegative nitrogen pulls the electrons towards itself, thus reducing the electron density on the ring carbons.

The electrophilic substitution takes place at C-3 in pyridine. This orientation can be explained by comparing the relative stabilities of the intermediates arising from attack at C-3, C-4 or C-2 (Fig. 13). The electrophilic attack at C-3 gives a carbocation which is hybrid of three resonance structures in which the positive charge is on the carbon atoms only.

Some typical examples of electrophilic substitutions in pyridine are given below (Fig. 14). All these reactions involve substitution of a pyridinium cation. Friedel-crafts alkylation and acylation does not proceed with pyridine. Alkyl halides on heating with pyridine give pyridinium salts. Nitration also gives poor yields. (ii) Nucleophilic Substitution Reactions: Pyridine undergoes nucleophilic substitution reactions much more readily than benzene because the ring has lower electron density than benzene due to electron withdrawal by nitrogen which is also responsible for its lower reactivity towards electrophiles. The high reactivity of pyridine towards nucleophilic substitution can cause displacement of even powerful hydride (H–) ion, e.g., the reaction of pyridine with sodamide gives 2-aminopyridine and is known as Chichibabin reaction (eq. 36).