A detergent is a surfactant or a mixture of surfactants having cleaning properties in dilute solutions. Commonly, "detergent" refers to alkylbenzenesulfonates, a family of compounds that are similar to soap but are less affected by hard water.

During 40’s and 50’s the detergent market was primarily captured by the dodecyl benzene (DDB), a product formed by alkylation of Benzene with propylene tetramer in a hard detergent alkylation unit. It was found, however, that the branched structure of the alkyl group was responsible for the poor biodegradability of the detergent, and the linear alkyl Benzene (LAB) was introduced in the early 60’s have substantially replaced its counter parts.

The detergency is in the cation, which can be a substantially sized molecule. Strong acids are used, such as hydrochloric acid to produce the CI anion as the neutralizing agent although in essence, no neutralization takes place in the manufacturing process. Cationic detergents are similar to the anionic ones, with a hydrophobic component, but instead of the anionic sulfonate group, the cationic surfactants have quaternary ammonium as the polar end. The ammonium center is positively charged.

Ethoxylates:Ethoxylates are compounds that have long hydrocarbon chains, but terminate with (OCH2CH2)nOH group. These groups are not charged, but they are highly hydrophilic owing to the presence of many oxygen centres.

Non-Ionic or Zwitterionic Detergents: This detergent consists of no inonic constituents which are ionically inert. The vast majority of all non-ionic detergents are condensation products or ethylene oxide with a hydrophobe. This grop of detergents is enormous, and the permutation endless. These are characterized by their (net) uncharged, hydrophilic head groups. They are based on polyoxyethylene (i.e. Tween, Triton and Brij series), Chaps, glycosides (i.e. octyl-thioglucoside, maltosides), bile acids such as DOC, lipids (HEGAs), or phosphine oxides. Zwitterionic detergents possess a net zero charge arising from the presence of equal numbers of +1 and -1 charged chemical groups.

Some of the enzymes used in detergent are protease,amlases,liapse and celolases. The enzymes catalyses the breakdown of chemicalds through addition of water and helps in the removal of soils. Polymers and enzymes play important role in improving the detergency. Polymers  help in soil removal, prevent insoluble salt incrustation work as anti-soil re-deposition, inhibit dye transfer. Use of optical brightner  enhance the brightness and whiteness. processing aids when added to slurries of detergent powder  improve stability and homogeneity of slurries during mixing and reduce viscosity.

LAB basic raw material for detergent which was introduced in 60's as substitute for nonbiodegradable branched. Other surfactants are alcoholsulphate (AS), alcoholethoxylates (AE), Secondary alkane sulphonate, and alpha olefin sulphonates. LAB is a clear colourless liquid with characteristic odour. It is most widely used as the basic raw material for the manufacture of synthetic detergent. The linear alkyl Benzene produced from the C10 – C13 or C11 – C14 linear mono olefins are useful detergent intermediate and can be readily sulphonated to yield linear alkyl benzene sulphonates. These compounds constitute the “active” ingredients of many house hold detergents. They are surface active compounds (surfactants) which are combined with various builders (often inorganic salts) to make up a detergent formula.

Linear alkyl benzene (LAB) is the basic raw material for production of most widely used detergent. Linear alkyl benzene was introduced as substitute for non biodegradable branched alkyl benzene. Process involved for LAB manufacturing is mention in Table M-IV 2.3.Although LAB demand grew by 14% per annum during 1984-90, future demand in the country is projected to increase at a healthy growth rate of 7-8% as against 2-4% worldwide. India and China with huge population are the largest market for LAB LAB manufactured in India started in 1985 by IPCL in 1985 followed by Reliance Industries, Tamilnadu Petro products, Nirma, IOC. Application of LAB in India is mention in Table M-IV 2.2. 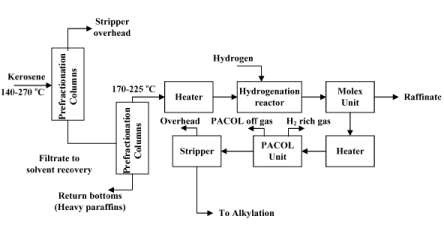 The conventional catalyst AlCl3, H2SO4 and HF commercially used has the disadvantage of causing corrosion of equipment as well as waste production. There has been continuous search for development of non corrosive solid catalyst with similar catalytic properties. Some of the catalyst which have been developed are SiO2-Al2O3, H-,ontmorillonite, amberlyst, H-Y, HBeta, HM . World LAB capacity was around 3 million tones with nearly 85percent based on HF alkylation, 5percent on the aluminium chloride process, and 10 percent on the newly developed fixed bed alkylation. The fixed bed alkylation was first introduced on commercial scale in 1995 in Canada by Petresa. Figure M-IV 2.3 gives details for LAB Manufacture from Fixed Bed Technology. Detergents use a synthetic surfactant in place of the metal fatty acid salts used in soaps. They are made both in powder and liquid form. Most detergents have soap in their mixture of ingredients, but it usually functions more as a foam depressant than as a surfactant. Various processes in manufacturing of detergents is mention in Table M-IV 2.4.

The resulting dodecylsulfate is converted to the sodium salt by a reaction with sodium hydroxide.