The systematic sampling technique is operationally more convenient than the simple random sampling.  It also ensures  at the same time that each  unit has equal probability of inclusion in the sample. In this method of  sampling, the first unit is selected  with the help of random numbers  and the remaining units are selected automatically according to a predetermined pattern.  This method is known as systematic  sampling.

Suppose the N units in the population are numbered 1 to N in some order. Suppose further that  N is expressible as a product of two  integers n and k, so that N = nK.

To draw a sample of size n,

- select a random number between 1 and  k. - Suppose it is  i.- Select the first unit whose serial number is  i.- Select every kth  unit after ith unit.- Sample will contain

Assume that the units in a population are arranged in the form of ml rows and each row contains nk units. A sample of size mn is required. Then

- Then the rows to be selected  are

and columns to be selected are

- The points at which the m selected rows and  n selected columns intersect determine the position of  mn selected units in the sample.

Such a sample is called an aligned sample.

Alternative approach to select the sample is

Such a sample is called an unaligned sample.

1. It is easier to draw a sample and often easier to execute it without  mistakes. This is  more advantageous  when the drawing is done in fields and offices as there may be substantial  saving in time.

2. The cost is low and the selection of  units is simple. Much  less training is needed for surveyors to collect  units through systematic sampling .

3. The systematic sample is spread  more evenly over the population. So no large part will fail to be  represented in the sample. The sample is evenly spread and cross section is better. Systematic sampling fails in case of  too many blanks.

Relation to the cluster sampling

Let yij : observation on the unit bearing the serial number i + ( j− 1)k in the population,

as an estimator of the population mean given by

is an unbiased  estimator of 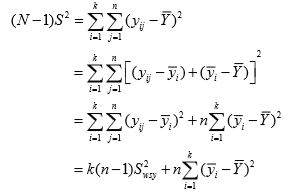 is the variation among the units that lie  within the same systematic sample . Thus 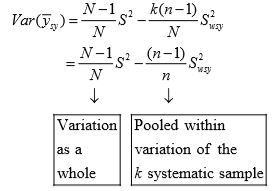 with  N = nk . This expression indicates  that when the within variation is  large, then 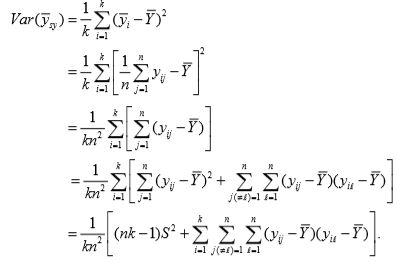 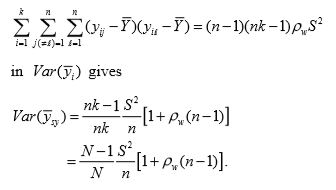 For a SRSWOR sample of size n ,

Also, the relative efficiency of 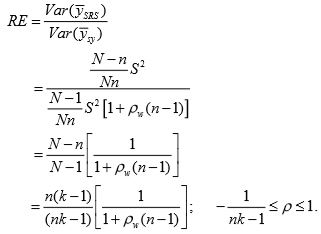 Comparison with stratified sampling: The systematic sample can also be viewed as if arising as a stratified sample.  If population of N = nk units is divided into n strata and suppose one unit is randomly drawn  from each of the strata. Then we get a stratified  sample of size n . In doing so, just   consider each row of the following arrangement as a stratum.

Recall that in case of stratified sampling with  k strata, the stratum mean

is an unbiased estimator of population mean. 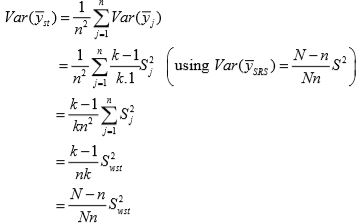 is the mean sum of squares of units in the jth stratum.

is the mean sum of squares within strata (or rows).The variance of systematic sample mean is 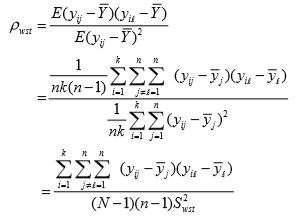