In 2002, William Kamkwamba had to drop out of school, as his father, a maize and tobacco farmer, could no longer afford his school fees. But despite this setback, William was determined to get his education. He began visiting a local library that had just opened in his old primary school, where he discovered a tattered science book. With only a rudimentary grasp of English, he taught himself basic physics - mainly by studying photos and diagrams. Another book he found there featured windmills on the cover and inspired him to try and build his own.He started by constructing a small model. Then, with the help of a cousin and friend, he spent many weeks searching scrap yards and found old tractor fans, shock absorbers, plastic pipes, and bicycle parts, which he used to build the real thing.For windmill blades, William cut some bath pipe in two lengthwise, then heated the pieces over hot coals to press the curled edges flat. To bore holes into the blades, he stuck a nail through half a corncob, heated the metal red, and twisted it through the blades. It took three hours to repeatedly heat the nail and bore the holes. He attached the blades to a tractor fan using proper nuts and bolts and then to the back axle of a bicycle. Electricity was generated through the bicycle dynamo. When the wind blew the blades, the bike chain spun the bike wheel, which charged the dynamo and sent a current through a wire to his house.What he had built was a crude machine that produced 12 volts and powered four lights. When it was all done, the windmill's wingspan measured more than eight feet and sat on top of a rickety tower 15 feet tall that swayed violently in strong gales. He eventually replaced the tower with a sturdier one that stands 39 feet and built a second machine that watered a family garden.The windmill brought William Kamkwamba instant local fame, but despite his accomplishment, he was still unable to return to school. However, news of his magetsi a mphepo - electric wind - spread beyond Malawi, and eventually, things began to change. An education official, who had heard the news of the windmill, came to visit his village and was amazed to learn that William had been out of school for five years. He arranged for him to attend secondary school at the government's expense and brought journalists to the farm to see the windmill. Then a story published in the Malawi Daily Mail caught the attention of bloggers, which in turn caught the attention of organizers for the Technology Entertainment and Design conference.In 2007, William spoke at the TED Global conference in Tanzania and got a standing ovation. Businessmen stepped forward with offers to fund his education and projects, and with money donated by them, he was able to put his cousin and several friends back into school and pay for some medical needs of his family. With the donation, he also drilled a borehole for a well and water pump in his village and installed drip irrigation in his father's fields.The water pump has allowed his family to expand its crops. They have abandoned tobacco and now grow maize, beans, soybeans, potatoes, and peanuts. The windmills have also brought big lifestyle and health changes to the other villagers. 'The village has changed a lot,' William says. 'Now, the time that they would have spent going to fetch water, they are using for doing other things. And also the water they are drinking is clean water, so there is less disease.' The villagers have also stopped using kerosene and can use the money previously spent on fuel to buy other things.William Kamkwamba's example has inspired other children in the village to pursue science. William says they now see that if they put their mind to something, they can achieve it. 'It has changed the way people think,' he says.Questions 1-5: Complete the steps of Building the Windmill. Choose NO MORE THAN TWO WORDS from the passage for each answer. 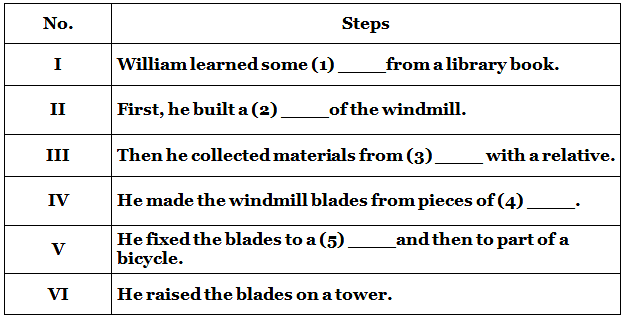 Questions 6-10: Do the following statements agree with the information given in the Reading passage. Answer True, False or Not given. Note:True: if the statement agrees with the informationFalse: if the statement contradicts the informationNot given: if there is no information on thisQ.6. William used the electricity he created for village transport. _______Q.7. At first, William's achievement was ignored by local people. _______Q.8. Journalists from other countries visited William's farm _______Q.9. William used money he received to improve water supplies in his village. _______Q.10. The health of the villagers has improved since the windmill was built. _______

Questions 11-13: Answer the questions below. Use NO MORE THAN ONE WORD and/or a NUMBER from the passage for each answer.Q.11. How tall was the final tower that William built? Q.12. What did the villagers use for fuel before the windmill was built?Q.13. What school subject has become more popular in William's village?

I. William learned some (physics) from a library book.

II. First, he built a (model) of the windmill.

III. Then he collected materials from (scrap yards) with a relative.

IV. He made the windmill blades from pieces of (pipe).

V. He fixed the blades to a (tractor fan) and then to part of a bicycle.

William used the electricity he created for village transport. - False

At first, William's achievement was ignored by local people. -False

Journalists from other countries visited William's farm. - Not Given

William used money he received to improve water supplies in his village. - True

The health of the villagers has improved since the windmill was built. - True

How tall was the final tower that William built?(39 feet)

What did the villagers use for fuel before the windmill was built?(kerosene)

What school subject has become more popular in William's village?(science)