Have you ever traveled to another part of your country and stayed for a few days? Travel within one's own country is popular throughout the world. And, according to a survey carried out in Australia in 2002, travelers are tending to spend more and more money on their holidays.The Domestic Tourism Expenditure Survey showed that domestic travelers – those traveling within the country – injected $23 billion into the Australian economy in 2002. As a result, domestic tourism became the mainstay of the industry, accounting for 75 percent of total tourism expenditure in Australia. International tourism, on the other hand, added $7 billion to the economy. Overall, in present dollar terms, Australians spent $7 billion more on domestic tourism in 2002 than they did when the first survey of tourist spending was completed in 1991.Thus, tourism has become one of Australia's largest industries. The combined tourist industry now accounts for about 5 percent of the nation's gross domestic product, compared with agriculture at 4.3 percent and manufacturing at 8 percent. Tourism is, therefore, an important earner for both companies and individuals in a wide range of industries. For example, the transport industry benefits from the extra money poured into it. Hotels spring up in resort areas to provide accommodation, and the catering industry gains as tourists spend money in restaurants. The retail sector benefits as well, as many tourists use their holidays to shop for clothes, accessories, and souvenirs.In most countries, the land is divided into different political areas. Australia is divided into six states and two territories. Since people travel for different reasons, there are significant differences in the length of time people stay in different locations and in the amount they spend while there.In 2002, Australian residents spent $8.4 billion on day trips and almost twice that amount on trips involving at least one night away from home. In that year, a total of 45 million overnight trips were made in Australia. Of these, 14.9 million were spent in New South Wales, 10.3 million were spent in Queensland, and 9.2 million were spent in Victoria. Fewer nights were spent in the other states, with 3.7 million in South Australia, 1.5 million in Tasmania, and 5 million in Western Australia. Despite the popularity of destinations such as Ayers Rock and Kakadu National Park, only 0.4 million overnight stays were recorded in the Northern Territory.New South Wales, Queensland, and Victoria attracted the greatest tourism revenue, with $5.2 billion, $5.1 billion, and $3.3 billion spent there respectively. The average expenditure for trips was $395 per person, with accommodation the biggest expenditure, followed by meals and fuel. The survey also showed that costs were higher for interstate travelers, who each spent an average of $812 per trip compared with $255 for those who traveled within one state. Trips to the Northern Territory were the most expensive, followed by Queensland, with South Australia and Victoria the least.Comparing the costs of trips for different purposes, the survey found that business trips were the most expensive because they were more likely to involve stays in commercial accommodation. Trips taken for educational reasons – to visit universities, museums, etc. – were also expensive, especially as they usually required inter-state plane tickets. Family holidays lay in the medium range, with transport and fares contributing to the cost, but adventure parks are the major expense. But while visits to friends and relatives were the least expensive – due to lower accommodation, food, and transport costs – these travelers spent most on shopping.The survey also estimates that Australians made 253 million day trips in 2002, visiting parks, beaches, and city attractions. The largest expenses were petrol costs (averaging $10 per day trip), followed by meals, souvenirs and entry fees. Day trips tended to cost the most in the Northern Territory, while South Australia was the cheapest. Overall, the survey found that men traveling alone spent more than any tourist group. In particular, men spent more on transport and meals. Women traveling alone spent the most on clothes, while souvenirs were bought more often by families than by other tourists.The challenge for the tourism industry now is to encourage Australians to continue spending money on travel and, if possible, to increase the amount they spend.

Questions 1-3: Complete the table below. Choose NO MORE THAN ONE WORD from the text for each answer. Write your answers in blanks 1-3 on your answer sheet.Industries that benefit from tourism 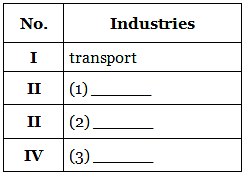 Questions 8-11: Complete the table below. Choose NO MORE THAN THREE WORDS from the text for each answer. Write your answers in blanks 8-11 on your answer sheet.Major expenses for different trips 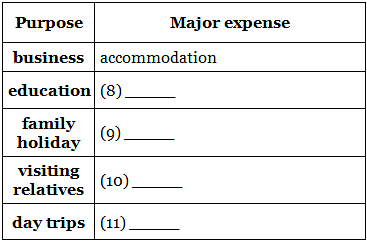 The state or territory in which the highest number of overnight trips was made was (New South Wales).

People traveling from state to state spent more than those traveling (within one state).

The TWO cheapest states or territories to travel to were (South Australia) and Victoria.

The category of people who spent the most on travel in Australia in 2002 were (men) traveling alone.

The category who spent the most on souvenirs were (families).