Question 1: The method of orientation used, when the plane table occupies a position not yet located on the map, is called as    [2017 : 1 Mark, Set-II](a) traversing(b) radiation(c) levelling(d) resectionAnswer: (d)Solution: 1. Traversing: 'Traverse’ means to pass across. Traversing refer to the framework of series of lines forming an open or closed polygon.2. Radiation: It is a method of locating a point by drawing a radial line from the plane table station to the station under consideration.3. Levelling: It is the method of determining the difference of elevations or levels of different points on the earth’s surface.4. Resection: It is the method of locating a station occupied by the plane table when the position of that station has not been plotted earlier on the sheet when the plane table occupied other stationQuestion 2: The VPI (vertical point of intersection) is 100 m away (when measured the horizontal) from the VPC (vertical point of curvature). If the vertical curve parabolic, the length of the curve (in meters and measured along the horizontal) is ________.    [2017 :1 Mark, Set-II]Solution: 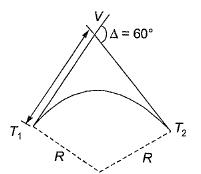 Answer: (a)Solution: Various laws of weightLet there be quantities A and B with weight Wa and Wb respectively