According to the history of biological classification, Aristotle, a Greek philosopher classified different animals based on the habitat, characteristics, etc. Later, a Swedish botanist Carolus Linnaeus introduced Taxonomic Hierarchy Categories during the 18th Century, and this system of classification is followed globally till date. Taxonomic hierarchy refers to the sequence of categories in increasing or decreasing order. Kingdom is the highest rank and species is the lowest rank in the hierarchy.Let us have a detailed look at Taxonomic Hierarchy in Biological Classification.

The word “Taxonomy” is derived from a Greek word – “taxis”, meaning arrangement or division, and “nomos”, meaning method.Taxonomy is a branch of Biology that refers to the process of classifying different living species. A taxon is referred to as a group of organisms classified as a unit.

“Taxonomic hierarchy is the process of arranging various organisms into successive levels of the biological classification either in a decreasing or an increasing order from kingdom to species and vice versa.”

Each of this level of the hierarchy is called the taxonomic category or rank.

In this system of classification, kingdom is always ranked the highest followed by division, class, order, family, genus, and species. 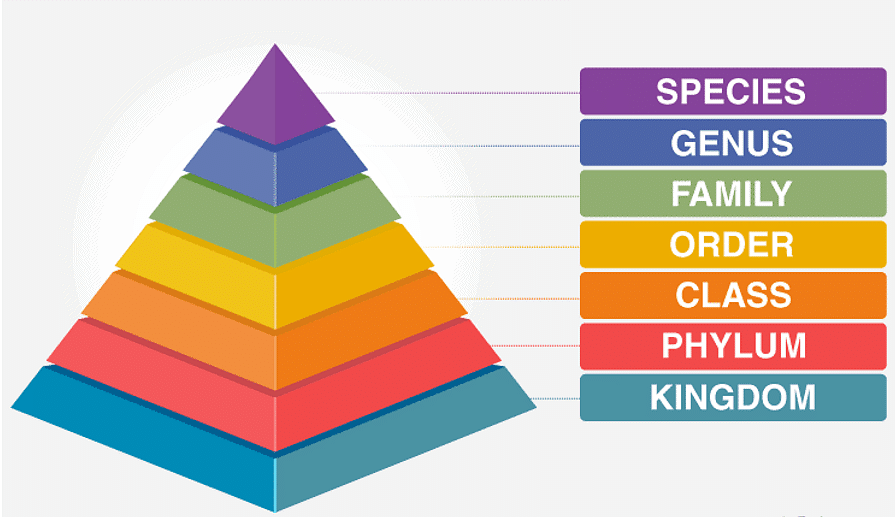 Following are the important taxonomic hierarchies in which different organisms are classified:

The kingdom is the highest level of classification, which is divided into subgroups at various levels. There are 5 kingdoms in which the living organisms are classified, namely, Animalia, Plantae, Fungi, Protista, and Monera.

This is the next level of classification and is more specific than the kingdom. There are 35 phyla in kingdom Animalia.For Example – Porifera, Chordata, Arthropoda, etc.

Class was the most general rank in the taxonomic hierarchy until phyla were not introduced. Kingdom Animalia includes 108 classes including class mammalia, reptilia, aves, etc. However, the classes used today are different from those proposed by Linnaeus and are not used frequently.

Order is a more specific rank than class. The order constitutes one or more than one similar families. There are around 26 orders in class mammalia such as primates, carnivora, etc.

This category of taxonomic hierarchy includes various genera that share a few similarities. For eg., the families in the order Carnivora include Canidae, Felidae, Ursidae, etc.

It is the lowest level of taxonomic hierarchy. There are about 8.7 million different species on earth. It refers to a group of organisms that are similar in shape, form, reproductive features. Species can be further divided into sub-species.

Following are some of the examples of taxonomic hierarchy: 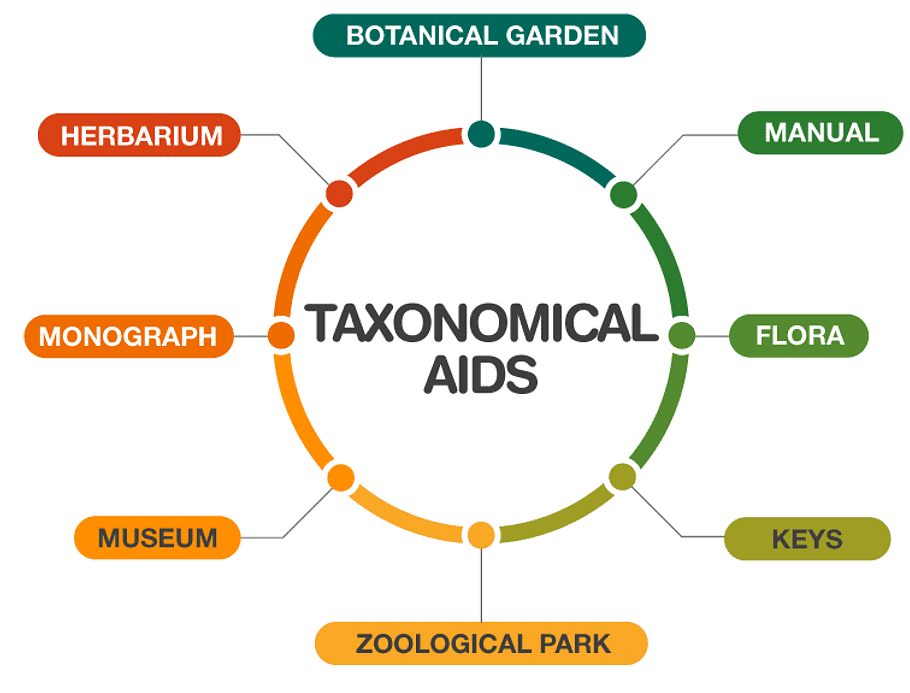 Taxonomical aids are the collections of samples or preserved organisms which help in extensive research for the identification of various taxonomic hierarchy. Classifying organisms into various categories needs a lot of field and laboratory study. This is an essential process, because taxonomic categorization helps in identifying many organisms necessary in various fields like agriculture, industries, bio resources, etc.The taxonomical Aids are the main source which helps us in studying the relative level of a group of organisms, their taxonomic hierarchy and the taxonomic rank.

Taxonomical Aids are required for:

Let us study some taxonomical aids which provide specimens for such intensive studies.

It is a store that houses a collection of preserved plant species. Plant specimens are preserved in forms of herbarium sheets which are prepared by drying, pressing and preserving the samples on sheets. These sheets are then arranged in their order of classification in the taxonomic hierarchy. These herbarium sheets carry all the information about the respective specimen.

These are gardens in which specific plants are grown and are labelled according to their taxonomy. Thus, the labels carry their scientific names and family. The main purpose of botanical gardens is to identify the plant species under consideration.

Biological museums are found in schools and colleges; like the biology laboratory that we find in our schools. In these museums, plants and animal species are preserved in jars and containers with the help of appropriate preservatives. They may also be dried and preserved. Birds and larger animals are usually stuffed before preserving and insects are killed and pinned in the boxes. We sometimes find skeletons of various animals too.

These are places where animals and birds are kept in protected boundaries. An attempt is made to provide them with a habitat closest to their natural habitats. Thus, we get a chance to learn about their natural habits and behaviour. Zoological parks are open for human visits.

This is a taxonomical aid where plants and animals are recognized based on contrasting characteristics known as keys. Two contrasting keys are generally kept as a pair, thus leading to acceptance of once and rejection of another.

The document Taxonomical Categories and Taxonomical Aids Notes - NEET is a part of NEET category.
All you need of NEET at this link: NEET