The document Taylor's and Laurent Series Physics Notes | EduRev is a part of the Physics Course Basic Physics for IIT JAM.
All you need of Physics at this link: Physics

If a=0, the expansion is known as a Maclaurin series.

Taylor's theorem (actually discovered first by Gregory) states that any function satisfying certain conditions can be expressed as a Taylor series.

may be found using Series[f, {x, a, n}]. The nth term of a Taylor series of a function f can be computed in the Wolfram Language using Series  Coefficient[f, {x, a, n}] and is given by the inverse Z-transform

Taylor series of some common functions include

To derive the Taylor series of a function f(x), note that the integral of the (n+1)st derivative f(n+1) of f(x) from the point x0 to an arbitrary point x is given by

where f(n) (x0) is the nth derivative of f(x) evaluated at x0, and is therefore simply a constant. Now integrate a second time to obtain

where f(k) (x0) is again a constant. Integrating a third time,

and continuing up to n+1 integrations then gives

Here, Rn is a remainder term known as the Lagrange remainder, which is given by

Rewriting the repeated integral then gives

Now, from the mean-value theorem for a function g(x), it must be true that

If f(z) is analytic throughout the annular region between and on the concentric circles K1 and k2 centered at z=a and of radii r1 and r2<r1 respectively, then there exists a unique series expansion in terms of positive and negative powers of (z-a), 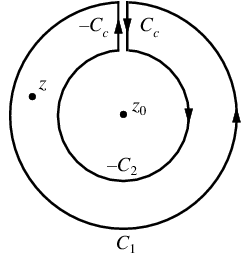 Let there be two circular contours c2 and c1, with the radius of c1 larger than that of c2. Let z0 be at the center of c1 and c2, and

, so that the plus and minus contributions of cc cancel one another, as illustrated above. From the Cauchy integral formula,

Now, since contributions from the cut line in opposite directions cancel out,

For the first integral,

. Now use the Taylor series (valid for

where the second term has been re-indexed. Re-indexing again,

Since the integrands, including the function f(z), are analytic in the annular region defined by c1 and c2, the integrals are independent of the path of integration in that region. If we replace paths of integration c1 and c2 by a circle c of radius r with

Generally, the path of integration can be any path ϒ that lies in the annular region and encircles z0 once in the positive (counterclockwise) direction.

The complex residues an are therefore defined by

Note that the annular region itself can be expanded by increasing r1 and decreasing r2 until singularities of f(z) that lie just outside c1 or just inside c2 are reached. If f(x) has no singularities inside c2, then all the bk terms in (◇) equal zero and the Laurent series of (◇) reduces to a Taylor series with coefficients ak.