The document The Complex Plane - Complex Analysis, CSIR-NET Mathematical Sciences Mathematics Notes | EduRev is a part of the Mathematics Course Mathematics for IIT JAM, CSIR NET, UGC NET.
All you need of Mathematics at this link: Mathematics

Complex numbers are defined as tuples (x,y) or equivalently x+iy. Therefore is is natural to visualize them as objects in the two-dimensional plane. 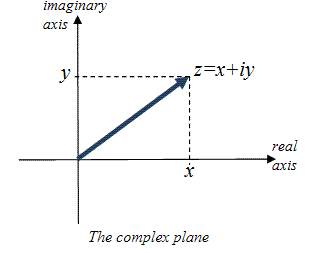 Before we explore multiplication further, let's define a few easier operations in C and see their impact in the complex plane.

Geometrically, these operations are easy to visualize: 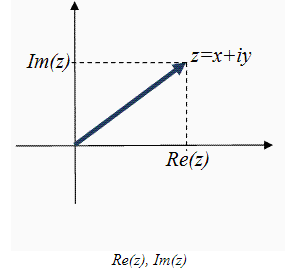 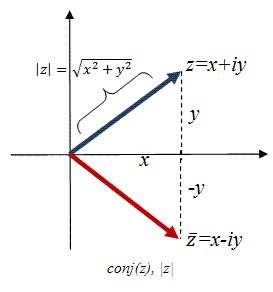 Our new operations can also be composed with one another:

Similar relations hold when composing the conjugate function, but since we will need these identities frequently we will state them in the form of a proposition:

Addition and in particular multiplication are what really define the structure of the complex plane and we need to figure out how to visualize those operations. Addition (and subtraction) will be familiar from vectors in the plane:

Multiplication is more difficult to figure out, but feel free to come up with a conjecture before reading on.

To see if your conjecture about multiplication is correct, we first need to introduce a more suitable coordinate system. Similar to vectors in the 2-D plane, we define polar coordinates as follows: 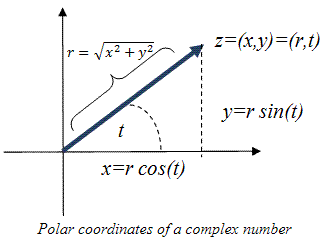 Going the other way, i.e. converting from rectangular to polar coordinates, is a little more confusing since the angle in the above definition is not unique. For example, the complex number 1+i clearly has a radius of √2 but any angle π/4 + 2kπ will work. In other words, z=1+i=(1,1) in rectangular coordinates is equal to

so that we can use the tan-1 = arctan adjusted in such a way as to give us the principle angle: take any non-zero complex number z:

and adjust the angle as follows: 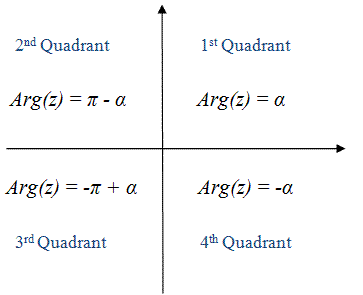 Using polar coordinates will finally allow us to understand how multiplication of complex numbers works geometrically:

You might wonder why this theorem is called "multiply complex numbers geometrically" when in fact it shows only formulas. But what the formulas mean is: 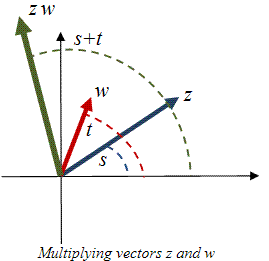 A similar trick works for division of two complex numbers:

If a complex number z lies on the unit circle it has length one so that z=sin(t)+i cos(t) for somes t (i.e. the radius r is 1. In that case the above theorem has another well-known corollary:

DeMoivre's Formula is quite something. It says that if you take a number on the unit circle (i.e. with lenght 1) with initial argument (angle) t and multiply it by itself, it simply rotates around the unit circle by that angle t. Each time you multiply the number by itself, the vector rotates another t degrees. In other words, in this case the power operator results in a simple rotation. 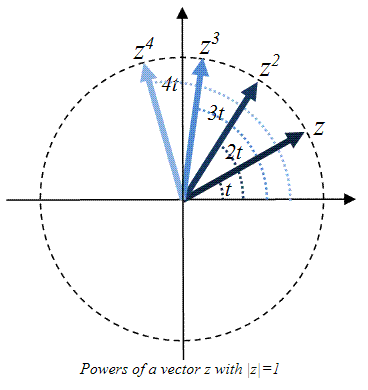 Two interesting questions related to this rotation, taken from the field of Complex Dynamics, are: suppose z is a complex number with |z|=1. Then:

Polar coordinates can be especially helpful for finding roots, in particular for complex numbers of lenght 1.

For any positive integer n and any non-zero complex number a = r cis(t) the equation zn = a has exactly n distinct roots given by:

In a previous example we found the two square roots of i, which turned out to be a fair amount of work. The above proposition allows us to dispense with such a question quickly. For example, the two solutions for

which you can quickly check using DeMoivre's Formula. Here is a geometric interpretation of this proposition: let's find, for example, the three third-roots of i, i.e. we want to find all solutions to z3 = i.

Note, in particular, that the third root of i turned out to be -i, which indeed checks out:

This proposition is very satisfying: it says that at least every simple polynomial equation of degree n has n solutions. Later we will see that this is true in general: every n-th degree polynomial has n roots, no "if's" and "but's". This, in fact, is a sign of things to come: many theorems in complex analysis will turn out to be very "satisfying" and nicely structured, which is one reason that the study of complex analysis is a lot of fun (I think -:). But first a few more 'profane' examples.

Let's conclude this chapter with a result that illustrates what a 'nicely structured' theorem in complex analysis can look like.

This is neat: not only does the equation zn = 1 have exactly n solutions (one of which is, of course, z=1), but the solutions have this really pretty geometric structure of forming a regular polygon, which implies algebraically that they add up to zero as vectors. Here are, for example, the eight roots of z8=1: 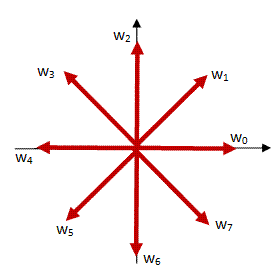 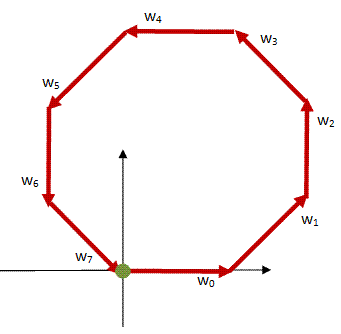