Armenia-Azerbaijan Conflict (Map-based)Part of: GS Prelims and GS-II – International RelationsIn news(i) Recently, territorial dispute between Armenia and Azerbaijan over the Nagorno-Karabakh region has re-erupted with heavy clashes.(ii) Armenia and Azerbaijan are part of Transcaucasia or South Caucasia. It is a geographical region in the vicinity of the southern Caucasus Mountains on the border of Eastern Europe and Western Asia consisting of Georgia, Armenia, and Azerbaijan.(iii) The Caucasus are a strategically important mountainous region in south-east Europe. For centuries, different powers in the region – both Christian and Muslim – have vied for control there.Do you know?(i) Nagorno-Karabakh region has 95% of the population as ethnically Armenian and is controlled by them but it is internationally recognised as part of Azerbaijan. Try yourself:Which country of the following is does not share a boundary with Caspian sea?
Explanation 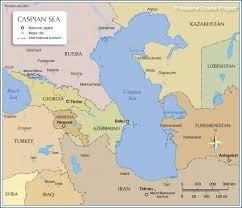 Sandalwood Spike DiseasePart of: GS Prelims and GS-III – Issues related to agricultureIn news(i) India’s sandalwood trees are facing a serious threat due to Sandalwood Spike Disease (SSD).(ii) The natural population of sandalwood in Marymoor Sandal Forest of Kerala and various reserve forests in Karnataka, including MM Hills (Malai Mahadeshwara Wildlife Sanctuary), are heavily infected with SSD.Important value additionsSandalwood Spike Disease(i) It is an infectious disease which is caused by phytoplasma.(ii) Phytoplasmas are bacterial parasites of plant tissues.(iii) They are transmitted by insect vectors and involved in plant-to-plant transmission.(iv) There is no cure as of now for the infection.(v) The infected tree will have to be cut down to prevent the spread of the disease.

Try yourself:Regarding Spike disease, consider the following statements:
1. It is an infectious disease which is caused by phytoplasma to sandalwood trees.
2. They are transmitted by insect vectors and involved in plant-to-plant transmission.

Key takeaways(i) The MSB should be set up as a non-profit entity.(ii) Possible functions (a) To provide advice and support to the Department of Telecommunications (DoT) in the monitoring and enforcement of net neutrality principles;(b) To investigate complaints regarding the violation of net neutrality;(c) To help DoT in the maintenance of a repository of reasonable traffic management practices. Which of the statements given above is/are attributes of net neutrality?

All are attributes of net neutrality

(i) A temple constructed by Emperor Ganapati Deva, a ruler of Kakatiya dynasty, in Dharanikota (Andhra Pradesh) has been converted into an abode of local goddess Balusulamma (Goddess Durga).(ii) The presiding deity at this 13th-century temple was Kakati Devi, the tutelary deity of Kakatiya rulers.(iii) Due to ravages of time and for no upkeep, the presiding deity got damaged.(iv) The villagers of Dharanikota, who had no knowledge about the past of the temple, installed Balusulamma idol and started worshipping.Important value additionsKakatiya Dynasty(i) Kakatiyas is an Andhra dynasty that flourished in the 12th century CE.(ii) The Kakatiya dynasty ruled from Warangal (Telangana) from CE 1083-1323.(iii) They were known for the construction of a network of tanks for irrigation and drinking water and thereby gave a big boost to the overall development of the region.(iv) Hundreds of Hindu temples were built under the patronage of Kakatiya kings like Ganapati Deva, Rudrama Devi and Prataparudra of Kakatiya dynasty.(v) Examples(a) Thousand Pillar Temple or Rudreshwara Swamy Temple, Telangana. It is a star-shaped, triple shrine (Trikutalayam) dedicated to Vishnu, Shiva and Surya.(b) Ramappa Temple, Warangal, Telangana;(c) Golconda Fort in Hyderabad, Telangana

Important value additionsCyanobacteria(i) They are blue-green algae.(ii) They are found naturally in soils and all types of water.(iii) These organisms use sunlight to make their own food.(iv) In warm, nutrient-rich (high in phosphorus and nitrogen) environments, cyanobacteria can multiply quickly.(v) Toxic blue-green algae are occurring more frequently as climate change drives up global temperatures.The African elephant(i) It is the largest animal walking the Earth.(ii) Their herds wander through 37 countries in Africa.(iii) IUCN Status: Vulnerable(iv) African elephants in Botswana, Namibia, South Africa and Zimbabwe: CITES Appendix IIBotswana(i) It is a landlocked country of southern Africa.(ii) The semi-arid Kalahari Desert covers about 70% of Botswana’s surface.(iii) It is home to mostly different types of acacia trees; animals like lion, cheetah, leopard, hyena, antelopes, meerkats, as well as many birds species and reptiles.(iv) It is also home to the tribes like- San people (Bushmen), Tswana, Kgalakgadi, and Herero people.(v) Okavango Delta: It is one of the world’s largest inland deltas.Do you know?(i) Neuro-toxins are substances that damage, destroy, or impair the functioning of neural tissue.(ii) An algal bloom is a rapid increase in the population of algae or cyanobacteria in an aquatic system. Try yourself:Which country of the following is does not share a boundary with the Indian ocean?
View Solution
Economy/ GovernanceTopic: General Studies 2,3

The basis of MSPContext: The newly passed farm trade Bill – Farmers’ Produce Trade and Commerce (Promotion and Facilitation) Bill – has raised concerns that farmers may no longer be assured MSP for their cropWhat is Minimum Support Price (MSP)?(i) MSP is the price set by the government to purchase crops from the farmers, whatever may be the market price for the crops. (ii) MSP is declared by Cabinet Committee on Economic Affairs before the sowing time on the basis of the recommendations of the Commission for Agricultural Costs and Prices (CACP) (iii) Support prices generally affect farmers’ decisions indirectly, regarding land allocation to crops, quantity of the crops to be produced etc. (iv) MSP assures farmers agricultural income besides providing a clear price signal to the market (v) The major objectives are to support the farmers from distress sales and to procure food grains for public distribution.What is Procurement Price?(i) Sometimes, the government procures at a higher price than the MSP. Here, the price will be referred as procurement price. (ii) The procurement price will be announced soon after the harvest. (iii) Normally, the procurement price will be higher than the MSP, but lower than the market price. (iv) The price at which the procured and buffer stocke food grains are provided through the PDS is called as issue price.What are the Farmers demanding with regard to MSP?(i) They are demanding for a provision in the new law safeguarding the continuance of the existing minimum support price (MSP)-based procurement regime. (ii) A mere sentence in the new law to the effect that nothing in this Act shall stop the government from announcing MSPs and undertaking crop purchases at these rates as before.What does the new law say about MSP?(i) The Farmers’ Produce Trade and Commerce (Promotion and Facilitation) Bill does not give any statutory backing to MSP.(ii) There isn’t even a mention of either “MSP” or “procurement” in the Bill passed by Parliament (iii) Government has justified the move stating that the new legislation has “nothing to do with MSP”. Instead, its objective is simply to grant farmers and traders the freedom of choice to sell & buy agricultural produce outside the premises of APMC mandis. (iv) MSP and procurement, according to government, are entirely separate issues (v) MSP was not part of any law before. Nor is it part of any law today.Is there any legal backing for MSP?(i) The National Food Security Act, 2013 (NFSA), provides a legal basis for the public distribution system (PDS) that earlier operated only as a regular government scheme. (ii) The NFSA made access to the PDS a right, entitling every person belonging to a “priority household” to receive food grains at cheaper rates (iii) MSP, by contrast, is devoid of any legal backing. Access to MSP, unlike subsidised grains through the PDS, isn’t an entitlement for farmers. They cannot demand it as a matter of right. (iv) The government can procure at the MSPs if it wants to. There is no legal compulsion. Nor can it force others (private traders, organised retailers, processors or exporters) to payWhat is the basis of MSP then?(i) It is only a government policy that is part of administrative decision-making. (ii) The government declares MSPs for crops, but there’s no law mandating their implementation(iii) The Centre currently fixes MSPs for 23 farm commodities based on the CACP’s recommendations —

(iv) CACP itself is not any statutory body but is an attached office of the Ministry of Agriculture and Farmers Welfare. It can recommend MSPs, but the decision on fixing (or even not fixing) and enforcement rests finally with the government.What is speciality about Sugarcane crop?(i) The only crop where MSP payment has some statutory element is sugarcane (ii) This is due to its pricing being governed by the Sugarcane (Control) Order, 1966 issued under the Essential Commodities Act. (iii) That order, in turn, provides for the fixation of a ‘fair and remunerative price’ (FRP) for cane during every sugar year (October-September). (iv) But even the FRP — which, incidentally, was until 2008-09 called the ‘statutory minimum price’ or SMP — is payable not by the government. (v) The responsibility to make FRP payment to farmers within 14 days of cane purchase lies solely with the sugar mills.Has there been any move to give MSP legislative backing?(i) The CACP, in its price policy report for the 2018-19 kharif marketing season, had suggested enactment of a legislation conferring on farmers ‘The Right to Sell at MSP’. (ii) This, it felt, was necessary “to instil confidence among farmers for procurement of their produce”. (iii) That advice was however not accepted by government.ConclusionAlong with market reforms for agricultural marketing envisaged through new farm bills, government should also increase the public farm infrastructure which will pose a tough competition in the free market.Connecting the dots

Try yourself:Which committee of the following is appointed on doubling of farmers income?
Explanation