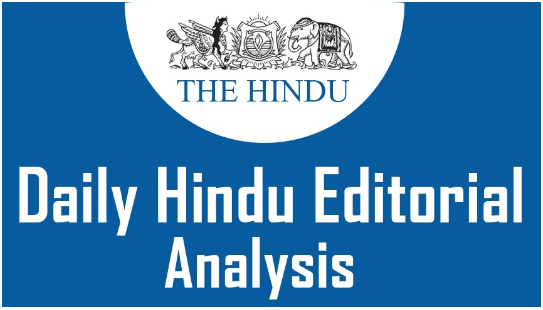 Context(i) There was an announcement by five regional parties and the CPI(M) on the formation of the ‘Peoples Alliance for Gupkar Declaration’ to fight for the restoration of full statehood and special constitutional status of J&K.(ii) This announcement has also coincided with the release of former J&K Chief Minister Mehbooba Mufti after 14 months in detention. 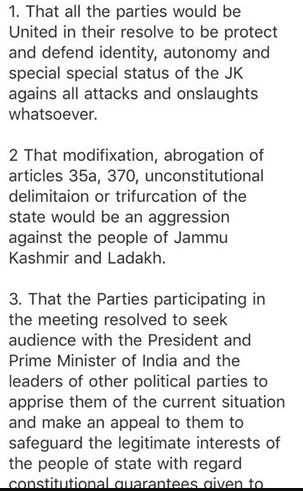 Coming Together(i) The Gupkar Declaration by these parties, on August 4, 2019, had anticipated the Centre’s move to repeal(cancel) J&K’s special status the next day and vowed to fight for its protection. J&K also lost its statehood.(ii) All the regional parties have now reiterated(repeated) their earlier pledge.(iii) The coming together of the rival regional parties is strange and significant; this is no electoral alliance, but a political meeting point on the status of Kashmir.(iv) It is a result of the perception that politics in J&K is a face-off with the Centre and a reflection of increased Kashmiri alienation(seperation) from the national mainstream.(v) The framing of Kashmir politics as a combat(fight) with the Centre has been forced upon the regional parties by the BJP government through its reckless policies.Opportunistic Alliances(i) In 2015, the BJP-PDP coalition government in J&K appeared like the maturing of a progressive trend. The BJP and the NC were in alliance(partnership) at the Centre earlier.(ii) With two main national parties, the Congress and the BJP, forming opportunistic alliances with two regional parties, there were reasons to believe that politics in Kashmir was not out of step with the national mainstream.(iii) Besides participation of Kashmiri parties in national coalition governments, the debate within had begun to echo political debates elsewhere in the country — with development and governance increasingly taking centre stage.(iv) Debates on autonomy and self-determination continued, but did not overwhelm politics in Kashmir.(v) As it turned out, alliances with regional actors did not temper(low down) the BJP’s strident(strict) opposition to the notional special status.(vi) It sought to delegitimise regional parties by terming them ‘soft separatists,’ and unleashed state agencies against them. J&K’s reorganisation in 2019 created new international dimensions.Conclusion(i) The BJP government at the Centre evidently believes that domination, not accommodation, is the way forward in Kashmir, which has helped the party’s electoral appeal in the heartland, and acts as an incentive.(ii) With sufficient amount of force, any policy is enforceable on the ground, but that is not a moral choice that democratic societies make.(iii) National integration advanced through patient negotiations and accommodation is more enduring(long-lasting) and formidable(strong).(iv) It is time for a new beginning in Kashmir and the Centre should be sensitive to the sentiments expressed in the Gupkar Declaration.(v) The Centre must respect the voices of reason and moderation in Kashmir.2. HOPE AMID UNCERTAINTY: ON IMF’S WORLD ECONOMIC OUTLOOK-

Context(i) The IMF’s latest World Economic Outlook sums up the challenges ahead in the report’s title: ‘A long and difficult ascent’.(ii) COVID-19 has already extracted a toll of over a million lives, accompanied by an evisceration(deprivation) of livelihoods and output in economies. 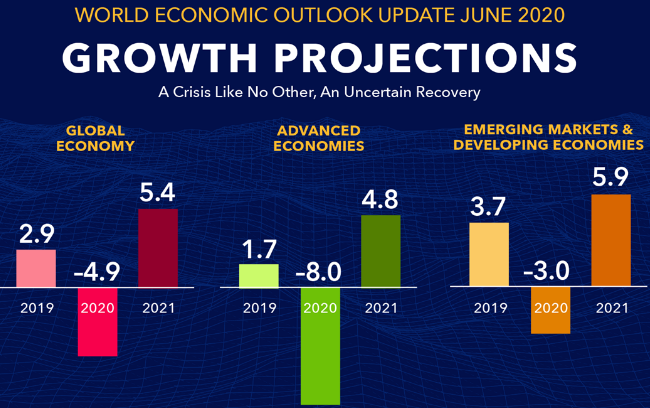 Danger Of Resurgence(i) Prognosticating(predicting) the economic future even as the pandemic rages(continuous) on is an unenviable(difficult) task.(ii) The Fund’s economists have gamely sought to make forecasts for world output through 2020, 2021 and into the medium term.(iii) While the global economy is projected to shrink 4.4% this year, reflecting a less severe contraction than the 5.2% drop estimated in June, output is seen rebounding at a marginally slower 5.2% pace in 2021.(iv) The IMF has based its revision on “better-than-anticipated second-quarter GDP out-turns, mostly in advanced economies” where activity improved after lockdowns were eased, as well as signs of a stronger recovery in the July-September quarter.(v) IMF has been prudent(careful) in pointing out that even as the world economy ascends(climbs) out of the depths it plunged to in April, there remains the danger of a resurgence in infections.(vi) And the risks associated with predicting the pandemic’s progression, the unevenness of public health responses, and the extent to which domestic activity can be disrupted, magnify(enlarged) the uncertainty.Pandemic Induced Scars(i) Pandemic is set to leave scars well into the medium term ‘as labour markets take time to heal, investment is held back by uncertainty and balance sheet problems, and lost schooling impairs human capital’.(ii) IMF Chief Economist Gita Gopinath contends that global growth will gradually slow to about 3.5% in the medium term.(iii) With the cumulative loss in output relative to the pre-pandemic projected path estimated to more than double to $28 trillion over 2020–25, efforts to improve average living standards are certain to be severely set back.(iv) Observing that the pandemic is set to widen inequality between economies and within nations, the Fund has urged greater international cooperation.(v) It is imperative(needful) for all countries to work closely to ensure that new treatments and vaccines are made available to all.(vi) Faster availability of medical solutions could boost global income by almost $9 trillion by end-2025, reducing income divergence, she says.(vii) With no visibility yet on vaccine availability, the IMF has also stressed the need for policymakers to persist with direct income support for the most vulnerable and regulatory forbearance for stressed but viable firms.(viii) The message is clear. In a world as interconnected as it is today, the cost of economic insularity would only be more protracted(prolonged) pain for all.ConclusionIMF calls for more international cooperation as the world economy recovers slowly.3. CHINA’S RISE AND FALL AT THE UN-

Context(i) The United Nations turned 75 this year.(ii) In normal times, September would have seen a grand Summit in New York but because of the novel coronavirus pandemic, world leaders were forced to do with video messages to the UN General Assembly.(iii) The UN season, though, started on an auspicious note for India, with India besting(defeating) China in the elections for a seat on the UN’s Commission on the Status of Women (CSW).(iv) This was the first such victory in a decade. To add to China’s woes(problems), soon after the CSW vote, it lost another election, this time to tiny Samoa for a seat on the UN Statistical Commission.(v) And a couple of days ago, it just about managed to get elected to the UN High Rights Council, coming fourth out of five contestants for four vacancies.(vi) Earlier, China’s candidate had lost to a Singaporean in the race for DG World Intellectual Property Organization.