ContextThanks to the pandemic, scientific institutions in India have been able to demonstrate their ability to rise to the occasion and show why the country should increase funding for science research and development. 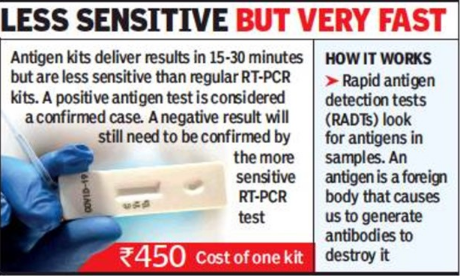 Scaling Up Testing(i) The ICMR’s approval, recently, of two indigenously developed tests that are rapid, low-cost and have high sensitivity and specificity provides the much-needed boost to scale up daily testing without diluting accuracy.(ii) After carrying out about one million tests each day for the last few weeks, India, for the first time, tested nearly 1.5 million samples on October 21.(iii) While most tests done each day were the low sensitivity rapid antigen tests, the ones developed by the Delhi-based Institute of Genomics and Integrative Biology, a CSIR institute, and IIT Kharagpur will now enable the shift to more accurate tests.(iv) The low sensitivity of rapid antigen tests has meant that even people with symptoms were being handed out a negative result nearly half the time, leading to undetected cases.(v) With unrestricted movement, businesses opening up, the festival season beginning and winter around the corner, the requirement for a rapid, low-cost test with high accuracy is crucial in checking the virus spread through early detection and repeated testing of even asymptomatic cases.(vi) Having locally developed tests with higher accuracy will now help States to offer tests on demand — as required in a September 4 ICMR advisory — while keeping costs low.Relying On Antigen Test(i) Low sensitivity of rapid antigen tests arises from not isolating the viral RNA from the swab samples and amplification(increase) of the DNA before detection.(ii) The two indigenously developed tests follow these two vital steps, the reason why the sensitivity and specificity are far superior to that of the rapid antigen tests.(iii) But, at the same time, both the tests developed locally do require minimum laboratory infrastructure to isolate the viral RNA from the samples.(iv) For that reason, India has to still rely on rapid antigen tests in rural areas that have no laboratory infrastructure.(v) But the tests developed by the Indian institutions, once commercially available, can readily replace the rapid antigen tests in places where such laboratory infrastructure is in place.(vi) Rapid antigen tests will become less important even in rural areas once research institutions succeed in developing protocols and tests for using saliva rather than swabs, and do not require isolation of viral RNA from patient samples before amplification and detection.(vii) Field testing and validation of such protocols is now pending.(viii) Relying on saliva samples would mean non-invasive sample collection, and probably even self-collection.(ix) Thus, the reliance on trained personnel would reduce and also minimise the risk of health workers getting infected.ConclusionIndigenously developed tests will allow scaling up of efforts to detect infections.2. DRIVE A HARDER BARGAIN AT THE DELHI MEET-

ContextOctober 24 marks the diamond jubilee of the United Nations. But far from joyous celebration, it is an occasion to sombrely(serious) reflect on why the UN is stagnating at 75 and how it can regain its lost lustre. 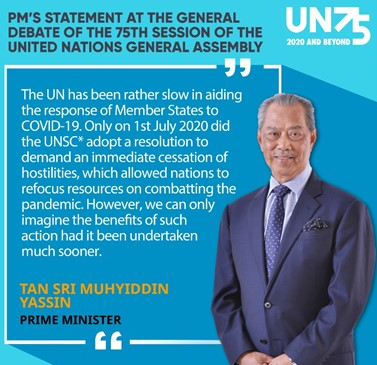 Just World Order(i) Although much has changed in the international system since 1945, the world body continues to see a tussle(fight) between ‘principle’ and ‘power’.(ii) On the one hand, the UN represents hopes of a peaceful and just world order through multilateral cooperation, abidance(obey) by international law, and uplift of the downtrodden.(iii) On the other, the institution has been designed to privilege the most powerful states of the post-World War II dispensation by granting them commanding heights over international politics via the undemocratic instruments of veto power and permanent seats in the Security Council (UNSC).(iv) Arguably, if the great powers of that period were not accommodated with VIP status, we may have seen a repeat of the ill-fated League of Nations.(v) Keeping all the major powers inside the tent and reasonably happy through joint control over the UNSC was intended to be a pragmatic(practical) step to avoid another world war.(vi) Presumably, the collective command model of big powers built into the UNSC is one of the reasons why there has been no third world war.A Model That Didn’t Work(i) But this model has also caused havoc.(ii) Almost immediately after the UN’s creation, it was pushed to the verge of irrelevance by the Cold War, which left the UN little room to implement noble visions of peace, development and human rights.(iii) It was only in the uncontested post-Cold War political milieu(atmosphere), when the liberal sole superpower, the U.S., strode(walked) like a colossus(bigger size), that the UN could spring back to life and embark on a plethora(series) of peacekeeping missions, nation-building interventions and promotion of universal human rights.(iv) In the U.S.-led ‘new world order’ of the 1990s, it appeared as if the problem of ‘power’ cutting out ‘principle’ had been resolved under the benign hegemony of a Washington that would be the flag-bearer of UN values.(v) However, that golden age of the UN was too deceptive to last. We are now past the unipolar moment and the ghosts of the Cold War are returning in complex multi-sided avatars.(vi) UN Secretary-General Antonio Guterres has labelled the present peaking of geopolitical tensions as a “great fracture”.(vii) The phrase ‘new Cold War’ is in vogue(form) to depict(show) the clash between China and the U.S. Tensions involving other players like Russia, Turkey, Iran and Israel in West Asia.(viii) It also depicts clash between China and its neighbours in Asia, are at an all-time high.(ix) The recrudescence of the worst habits of competitive vetoing by P-5 countries has prevented the UNSC from fulfilling its collective security mandate.(x) So dangerous are the divisions and their spillover effects that Mr. Guterres has lamented that “we have essentially failed” to cooperate against the immediate global threat of the pandemic.(xi) He has also rekindled the old maxim, “The UN is only as strong as its members’ commitment to its ideals.”Obstacles To Reforms(i) But apart from rivalries of member states, there is a larger underlying problem.(ii) At the core of the paralysis of the UN is the phenomenon of P-5 countries (China, France, Russia, the U.K., and the U.S.) blocking reforms.(iii) Outmoded procedures based on the discriminatory original sin of superior prerogatives(rights) to P-5 countries have to be discarded.(iv) Why should expansion of the UNSC require consensus of the P-5? In the 21st century, why should there be veto power in anyone’s hands?(v) If a simple majority voting method could replace the P-5 consensus method, the obstacles(hurdles) to UNSC reforms would reduce.Conclusion(i) On the 75th anniversary of the UN, there must be a global push against ossifying(hardening) ‘rules’ which have privileged ‘rule’ of the few over the many.(ii) That is the only way to restore some balance between ‘power’ and ‘principle’ and ensure a renaissance(revival) of the UN.