The document The Kinetic Theory Of Gases - Gaseous Chemistry Notes | EduRev is a part of the Chemistry Course Physical Chemistry.
All you need of Chemistry at this link: Chemistry

The Kinetic Theory of Gases

In order to derive the theoretical aspect of the various gas laws based on simple experiment facts, Maxwell proposed the following postulates under the heading of kinetic theory of gases:

The postulates of kinetic theory of gas are

The Kinetic Equation: Maxwell also derived an equation on the basis of above assumptions as

m = mass of one molecules of gas

n = number of molecules of gas

Maxwell and Boltzmann proposed that gas molecules are always in rapid random motion colliding with each other and with the walls of container. Due to such collisions, their velocities always changes. A fraction of molecules have a particular molecular velocity at a time. James Clark Maxwell calculated the distribution of velocity among fractions of total number of molecules, on the basis of probability.

The distribution of velocities of different gas molecules may be shown by the following curve. 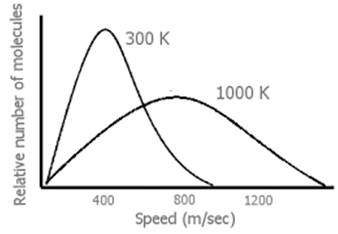 From the curve it may be concluded that

(i)         Only a small fraction of molecules have either very low or very high velocity.

(iii)       Most of the molecules have velocity close to most probable velocity represented by the top of curve.

Average Velocity: As per kinetic theory of gases, each molecule is moving with altogether different velocity. Let ‘n’ molecules be present in a given mass of gas, each one moving with velocity u1, u2, u3…….., un.

The average velocity or Uav = average of all such velocity terms.

Root Mean Square Velocity: Maxwell proposed the term Urms as the square root of means of square of all such velocities.

Most probable velocity:  It is the velocity possessed by maximum number of molecules.

Kinetic Energy of Gas:  As per kinetic equation

Where k is the Boltzmann constant

An ideal gas is one which obeys the gas laws of the gas equation PV = RT at all pressure and temperatures. However no gas in nature is ideal. Almost all gases show significant deviations from the ideal behaviour. Thus the gases H2, N2 and CO2 which fail to obey the ideal-gas equation are termed as non-ideal or real gases.

Compressibility Factor: The extent to which a real gas departs from the ideal behaviour may be depicted in terms of a new function called the compressibility factor, denoted by Z. It is defined as

The deviations from ideality may be shown by a plot of the compressibility factor Z, against P.

For an ideal gas, Z = 1 and it is independent of temperature and pressure.

The deviations from ideal behaviour of a real gas will be determined by the value of Z being greater or less than 1.

The difference between unity and the value of the compressibility factor of a gas is a measure of the degree of non ideality of the gas.

For a real gas, the deviations from ideal behaviour depends on:

This will be illustrated by examining the compressibility curves of some gases discussed below with the variation of pressure and temperature.

Effect of Pressure Variation on Deviations: 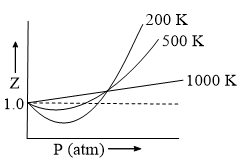 From the above curves we can conclude that:

Greater is the departure Z from unity, more is the deviation from ideal behaviour.

Where a and b are constants characteristic of a gas.

Volume Correction:  We know that for an ideal gas P × V = nRT. Now in a real gas the molecular volume cannot be ignored and therefore let us assume that ‘b’ is the volume excluded (out of the volume of container) for the moving gas molecules per mole of a gas. Therefore due to n moles of a gas the volume excluded would be nb.

Pressure Correction: Let us assume that the real gas exerts a pressure P. The molecules that exert the force on the container will get attracted by molecules of the immediate layer which are not assumed to be exerting pressure.

(concentration of molecules which are hitting the container’s wall)

(concentration of molecules which are attracting these molecules)

Where a is the constant of proportionality which depends on the nature of gas. Higher value of ‘a’ reflects the increased attraction between gas molecules.

The Vander Waals constant b (the excluded volume) is actually 4 times the volume of a single molecule. i.e., b = 4 NAV where NA → Avogadro number.

where r is the radius of a molecule.

The constant a and b: Vander Waals constant for attraction (A) and volume (B) are characteristic for a given gas. Some salient features of ‘a’ and ‘b’ are:

Then Vander Waals equation reduces to:

Or PV < RT at low pressure (below Boyle temperature)

This accounts for the dip in PV vs P isotherm at low pressure.

may be neglected in comparison with P.

Or PV > RT at higher pressure (above Boyle temperature)

(iii)  At very low pressure: V becomes so large that both b and

(iv)   Hydrogen and Helium: These are two lightest gases known. Their molecules have very small masses the attractive forces between such molecules will be extensively small. So

is negligible even at ordinary temperature. Thus PV > RT.

Viral Equation of State For 1 Mole of Gas:

The phenomena of converting a gas into liquid is known as liquefaction. The liquefaction of gas is achieved by controlling P and T as follows:

1.  Increasing pressure: As increase in results in an increase in attraction among molecules.

Critical temperature (Tc): It is defined as the characteristic temperature for a given gas below which a continuous increase in pressure will bring liquefaction of gas and above which no liquefaction is noticed although pressure may be increased e.g. Tc for CO2 is 31.2°C.

Critical pressure (Pc): It is defined as the minimum pressure applied on 1 mole of gas placed at critical temperature, to just liquefy the gas

At a given temperature

The number of molecules present in 1 cc of gas (or) vapour at STP.