In 1913 Henry Moseley showed that properties of the elements are determined by atomic numbers instead of the atomic mass. It formed the basis of modern periodic law. The law is -

(1) It is based on the Bohr-Bury electronic configuration concept and atomic number.

(2) This model is proposed by Rang and Werner.

This table is based on modern periodic law, the elements are arranged in the increasing order of atomic numbers in such a way that elements having the same number of valence electrons are placed in the same vertical column.

Elements belonging to same group have same number of electrons in the outer most shell so their properties are similar. 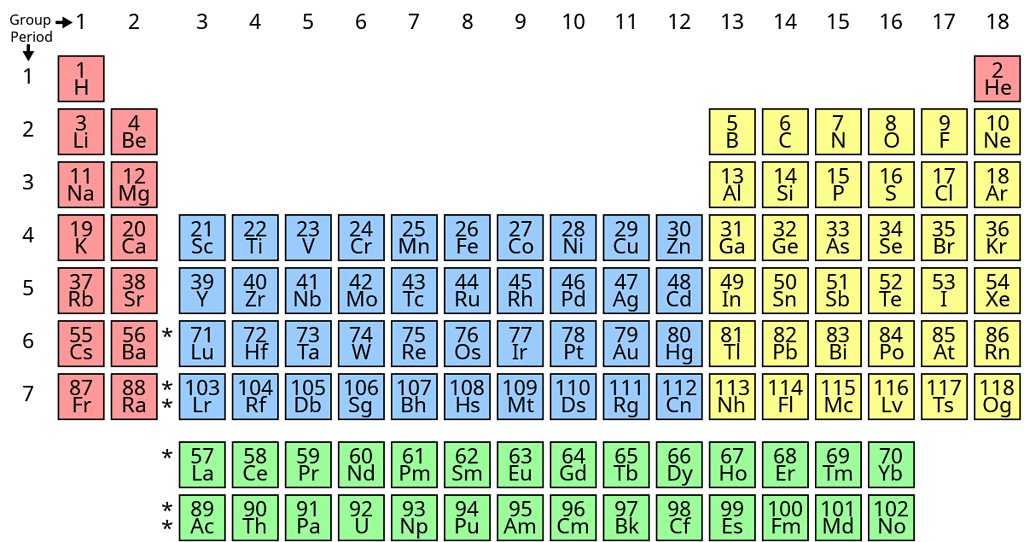 It is defined as the combining capacity of the element. Valency is determined by the number of electrons present in outer most shell. These electrons are known as valence electrons.

Variation of valency along a group :- On moving down a group. The no. of valence electrons remains same. So the valency of all the elements of a group is same.

Atomic size means atomic radius of an atom which is defined as the distance between the centre of the nucleus of an atom and the valence shell containing electrons in an isolated atom, since it is very difficult to measure the atomic radius because -

(i) The isolation of single atom is very difficult.(ii) There is no well-defined boundary for the atom.

So, the more accurate definition of atomic radius is -

Based on chemical bonds, atomic radius is divided in to four categories:

(a) Covalent radius (Single bonded covalent radius): For homoatoms, it is half of the internuclear distance between two singly bonded homoatoms.

(b) Covalent radius for hetero atoms:

(i) In case of hetero atomic molecule (A – B), if the electronegativity difference is less. Then covalent radius of oxygen, nitrogen and carbon is taken from the compound H2O2, N2H4 and C2H6 respectively.

This radii is subtracted from the bond length of A–B molecules.eg. C–I (electronegativity is almost same 2.5)

Anionic radius is always greater than atomic radius because in an anion electrons are more than the protons so effective nuclear charge reduces and inter electronic repulsion increases so size of anion also increases.

Half of the inter nuclear distance between two adjacent metallic atoms.

Those atoms which are not bonded with each other experience a weak attractive force to come nearer. Half of the distance between the nuclei of adjacently placed atoms in solid state of a noble gas is Vander waal's radius.

Variation of Atomic size in a group:

On moving down a group of periodic table, the size of the atom increases.

Variation of atomic size in period:

When we move from top to bottom in a group, a new shell of electron is added in each period. This addition increases the size.

In general atomic radii decreases across a period from left to right eg. In IInd period.

Li atom is largest and Fluorine is the smallest atom because nuclear charge increases with increase in atomic number. Electrons are also increasing but these are added to the same shell.

Atomic Size :- Decreases along the period. Increases down the group.

Metallic character is the tendency of atoms of the elements to lose electrons and form positive ions. It can be expressed asM → M+ + e–

The minimum amount of energy required to remove the most losely bounded electron from an isolated gaseous neutral atom to form gaseous electropositive ion is called Ionization enthalpy. Its unit is kilo joules per mole (kJ/mol)M(g) + Energy → M+It is a measure of tendency of atoms to lose electrons. The tendency to lose electron increases from top to bottom in a group and it decreases on moving left to right in a period.

It is defined as the amount of energy released when an isolated gaseous atom in the ground state accepts an electron to form gaseous negative ion i.e. an anion. It is a measure of tendency of an atom to accept an extra electron to form an anion. Its unit is kilo joule per mole (kJ/mole). Electron gain enthalpy of elements goes on increasing as we move from left to right in a period. In group it decreases  from top to bottom.