The document The Spirochetes - NEET NEET Notes | EduRev is a part of NEET category.
All you need of NEET at this link: NEET

Which disease is caused by spirochetes bacterium?
Ref: https://edurev.in/question/734664/Which-disease-is-caused-by-spirochetes-bacterium-

Introduction to the Spirochetes

Although spirochetes are not a large group -- there are only six genera -- they have had tremendous impact on our lives. Both syphilis and Lyme disease are caused by these bacteria, and other species are important symbionts in the stomachs of cows and other ruminants.

Spirochetes are long and slender bacteria, usually only a fraction of a micron in diameter but 5 to 250 microns long. They are tightly coiled, and so look like miniature springs or telephone cords. Members of this group are also unusual among bacteria for the arrangement of axial filaments, which are otherwise similar to bacterial flagella. These filaments run along the outside of the protoplasm, but inside an outer sheath; they enable the bacterium to move by rotating in place. You can see these filaments in the picture of Treponema above, which is the only genus to lack the outer sheath.

The ecological roles of spirochetes are varied; the group includes both aerobic and anaerobic species, and both free-living and parasitic forms. One species, in the genus Cristispira, has only been found growing on the crystalline style in the digestive tract of certain bivalve mollusks. Some species of Treponema live in the rumen of a cow's stomach, where they break down cellulose and other difficult to digest plant polysaccharides for their host.

Perhaps the best-known spirochetes are those which cause disease. These include syphilis and Lyme disease, as well as other less well-known ones. 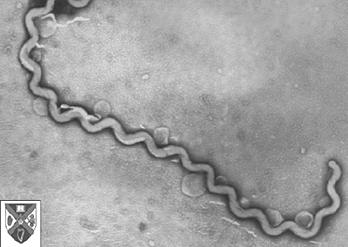