The GovernorHe is the nominal executive head of a state. Normally, each State has its own Governor, but under the 7 th Amendment Act, 1956, a person can be appointed Governor of one or more States or Lt. Governor of the Union Territory.Eligibility Conditions 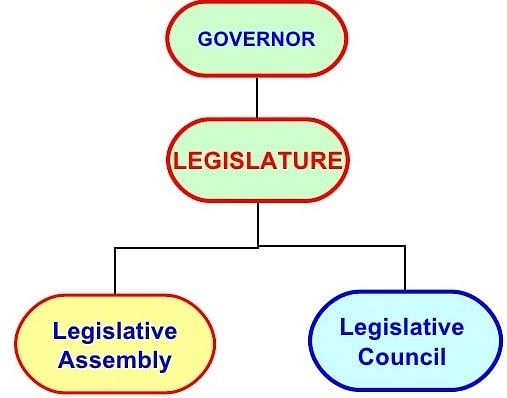 State Legislature can be:

The Legislative Council can be created or abolished on the recommendation of Legislative Assembly.

Also known as the Upper House. Like the Rajya Sabha, it is also a permanent house and CANNOT be dissolved.

Its total strength cannot exceed 1/3 rd of the strength of the Legislative Assembly, subject to a minimum of 40 members.

Same as for the Lok Sabha, except the age which is 30 yrs.

The Council elects a Chairman and a Vice-chairman from amongst its members.

Same as for the Lok Sabha or Legislative Council except the minimum age, which is 25 years in this case.

Every Legislative Assembly chooses its Speaker and Deputy Speaker.

With reference to a Money Bill, the position is the same as prevails at the Union level: the Bill can be introduced only in the Assembly; the will of the Assembly prevails; If the State does not comply with the directives of the Centre, the latter may invoke Art. 356 and take over the administration of the State to itself.

The States in India are greatly dependent on the Centre. The Constitution provides inadequate sources of revenue to the States. Therefore, they have to depend on the Centre for subsidies and other financial contributions.

The Union exercises financial control through the Comptroller and Auditor General of India, who audits the accounts of the States and reports on them.