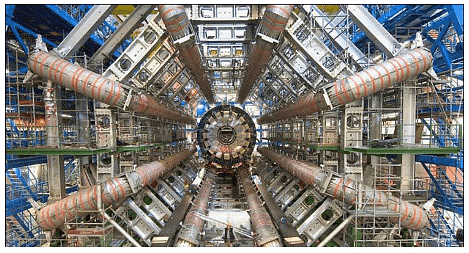 Part of the Large Hadron Collider at CERN, on the border of Switzerland and France. The LHC is a particle accelerator, designed to study fundamental particles.

Following ideas remarkably similar to those of the ancient Greeks, we continue to look for smaller and smaller structures in nature, hoping ultimately to find and understand the most fundamental building blocks that exist. Atomic physics deals with the smallest units of elements and compounds. In its study, we have found a relatively small number of atoms with systematic properties that explained a tremendous range of phenomena. Nuclear physics is concerned with the nuclei of atoms and their substructures. Here, a smaller number of components—the proton and neutron—make up all nuclei. Exploring the systematic behavior of their interactions has revealed even more about matter, forces, and energy. Particle physicsdeals with the substructures of atoms and nuclei and is particularly aimed at finding those truly fundamental particles that have no further substructure. Just as in atomic and nuclear physics, we have found a complex array of particles and properties with systematic characteristics analogous to the periodic table and the chart of nuclides. An underlying structure is apparent, and there is some reason to think that we are finding particles that have no substructure. Of course, we have been in similar situations before. For example, atoms were once thought to be the ultimate substructure. Perhaps we will find deeper and deeper structures and never come to an ultimate substructure. We may never really know, as indicated in [link].
The properties of matter are based on substructures called molecules and atoms. Atoms have the substructure of a nucleus with orbiting electrons, the interactions of which explain atomic properties. Protons and neutrons, the interactions of which explain the stability and abundance of elements, form the substructure of nuclei. Protons and neutrons are not fundamental—they are composed of quarks. Like electrons and a few other particles, quarks may be the fundamental building blocks of all there is, lacking any further substructure. But the story is not complete, because quarks and electrons may have substructure smaller than details that are presently observable.

This chapter covers the basics of particle physics as we know it today. An amazing convergence of topics is evolving in particle physics. We find that some particles are intimately related to forces, and that nature on the smallest scale may have its greatest influence on the large-scale character of the universe. It is an adventure exceeding the best science fiction because it is not only fantastic, it is real.

The Yukawa Particle and the Heisenberg Uncertainty Principle Revisited:

Particle physics as we know it today began with the ideas of Hideki Yukawa in 1935. Physicists had long been concerned with how forces are transmitted, finding the concept of fields, such as electric and magnetic fields to be very useful. A field surrounds an object and carries the force exerted by the object through space. Yukawa was interested in the strong nuclear force in particular and found an ingenious way to explain its short range. His idea is a blend of particles, forces, relativity, and quantum mechanics that is applicable to all forces. Yukawa proposed that force is transmitted by the exchange of particles (called carrier particles). The field consists of these carrier particles.The strong nuclear force is transmitted between a proton and neutron by the creation and exchange of a pion. The pion is created through a temporary violation of conservation of mass-energy and travels from the proton to the neutron and is recaptured. It is not directly observable and is called a virtual particle. Note that the proton and neutron change identity in the process. The range of the force is limited by the fact that the pion can only exist for the short time allowed by the Heisenberg uncertainty principle. Yukawa used the finite range of the strong nuclear force to estimate the mass of the pion; the shorter the range, the larger the mass of the carrier particle.

Specifically for the strong nuclear force, Yukawa proposed that a previously unknown particle, now called a pion, is exchanged between nucleons, transmitting the force between them. [link]illustrates how a pion would carry a force between a proton and a neutron. The pion has mass and can only be created by violating the conservation of mass-energy. This is allowed by the Heisenberg uncertainty principle if it occurs for a sufficiently short period of time. As discussed in Probability: The Heisenberg Uncertainty Principle the Heisenberg uncertainty principle relates the uncertainties E in energy and t in time by

where h is Planck’s constant. Therefore, conservation of mass-energy can be violated by an amount

in which time no process can detect the violation. This allows the temporary creation of a particle of mass

. The larger the mass and the greater the

, the shorter is the time it can exist. This means the range of the force is limited, because the particle can only travel a limited distance in a finite amount of time. In fact, the maximum distance is

, where c is the speed of light. The pion must then be captured and, thus, cannot be directly observed because that would amount to a permanent violation of mass-energy conservation. Such particles (like the pion above) are called virtual particles, because they cannot be directly observed but their effects can be directly observed. Realizing all this, Yukawa used the information on the range of the strong nuclear force to estimate the mass of the pion, the particle that carries it. The steps of his reasoning are approximately retraced in the following worked example:Calculating the Mass of a PionTaking the range of the strong nuclear force to be about 1 fermi (

), calculate the approximate mass of the pion carrying the force, assuming it moves at nearly the speed of light.Strategy:The calculation is approximate because of the assumptions made about the range of the force and the speed of the pion, but also because a more accurate calculation would require the sophisticated mathematics of quantum mechanics. Here, we use the Heisenberg uncertainty principle in the simple form stated above, as developed in Probability: The Heisenberg Uncertainty Principle. First, we must calculate the time

that the pion exists, given that the distance it travels at nearly the speed of light is about 1 fermi. Then, the Heisenberg uncertainty principle can be solved for the energy

, and from that the mass of the pion can be determined. We will use the units of

for mass, which are convenient since we are often considering converting mass to energy and vice versa.Solution:The distance the pion travels is

, and so the time during which it exists is approximately

Solving this and converting the energy to MeV gives

Mass is related to energy by

, so that the mass of the pion is

Discussion:This is about 200 times the mass of an electron and about one-tenth the mass of a nucleon. No such particles were known at the time Yukawa made his bold proposal.Yukawa’s proposal of particle exchange as the method of force transfer is intriguing. But how can we verify his proposal if we cannot observe the virtual pion directly? If sufficient energy is in a nucleus, it would be possible to free the pion—that is, to create its mass from external energy input. This can be accomplished by collisions of energetic particles with nuclei, but energies greater than 100 MeV are required to conserve both energy and momentum. In 1947, pions were observed in cosmic-ray experiments, which were designed to supply a small flux of high-energy protons that may collide with nuclei. Soon afterward, accelerators of sufficient energy were creating pions in the laboratory under controlled conditions. Three pions were discovered, two with charge and one neutral, and given the symbols

, respectively. The masses of

has a mass of

. These masses are close to the predicted value of

and, since they are intermediate between electron and nucleon masses, the particles are given the name meson.The pions, or

-mesons as they are also called, have masses close to those predicted and feel the strong nuclear force. Another previously unknown particle, now called the muon, was discovered during cosmic-ray experiments in 1936 (one of its discoverers, Seth Neddermeyer, also originated the idea of implosion for plutonium bombs). Since the mass of a muon is around

, at first it was thought to be the particle predicted by Yukawa. But it was soon realized that muons do not feel the strong nuclear force and could not be Yukawa’s particle. Their role was unknown, causing the respected physicist I. I. Rabi to comment, “Who ordered that?” This remains a valid question today. We have discovered hundreds of subatomic particles; the roles of some are only partially understood. But there are various patterns and relations to forces that have led to profound insights into nature’s secrets.

Summary:Yukawa’s idea of virtual particle exchange as the carrier of forces is crucial, with virtual particles being formed in temporary violation of the conservation of mass-energy as allowed by the Heisenberg uncertainty principle.