Kirchhoff’s Voltage Law (K.V.L.)Sum of the voltage in any closed loop must be zero considering same sign convention.

Voltage drop across RL is

Solve equation (i) and (ii) for I and ILLets apply current division rule in two loop network as shown in figure. Solving above equations, we get

Superposition TheoremThe superposition theorem states that in a network with two or more sources the current or voltage for any component is the algebraic sum of the effects produced by each source acting independently. In order to use one source at a time, all other sources are removed from the circuit or voltage source is removed by replacing it with a short circuit. A current source is removed by replacing it with an open circuit.

Direction of currents shown in figure are assumed directions, actual direction may be different.

Example: Using Superposition theorem find current across each element for the circuit shown in figure below

Solution:Let us find current due to individual source

Let us find current due to second source.

Thevenin theoremThevenin’s Theorem states that – any complicated network across its load terminals can be substituted by a voltage source with one resistance in series. This theorem helps in the study of the variation of current in a particular branch when the resistance of the branch is varied while the remaining network remains the same for example designing of electronics circuitsA more general statement of Thevenin’s Theorem is that any linear active network consisting of independent or dependent voltage and current source and the network elements can be replaced by an equivalent circuit having a voltage source in series with a resistance, that voltage source being the open circuited voltage across the open circuited load terminals and the resistance being the internal resistance of the source.In other words, the current flowing through a resistor connected across any two terminals of a network by an equivalent circuit having a voltage source Eth in series with a resistor Rth. Where Eth is the open circuit voltage between the required two terminals called the Thevenin voltage and the Rth is the equivalent resistance of the network as seen from the two terminal with all other sources replaced by their internal resistances called Thevenin resistance.

Explanation of Thevenin’s TheoremThe Thevenin’s statement is explained with the help of a circuit shown below. As per Thevenin’s Statement, the load current is determined by the circuit shown above and the equivalent Thevenin’s circuit is obtained.The Load current IL is given as

Steps for Solving Thevenin’s TheoremStep 1 – First of all remove the load resistance rL of the given circuit.Step 2 – Replace all the impedance source by their internal resistance.Step 3 – If sources are ideal then short circuit the voltage source and open the current source.Step 4 – Now find the equivalent resistance at the load terminals know as Thevenin’s Resistance (RTH).Step 5 – Draw the Thevenin’s equivalent circuit by connecting the load resistance and after that determine the desired response.This theorem is possibly the most extensively used networks theorem. It is applicable where it is desired to determine the current through or voltage across any one element in a network. The Thevenin’s Theorem is an easy way to solve the complicated network. 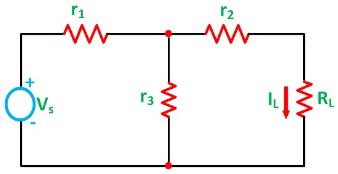 Now, the value of current I flowing in the circuit is found out by the equation

Now the short circuit is removed, and the independent source is deactivated as shown in the circuit diagram below and the value of the internal resistance is calculated by As per the Norton’s Theorem, the equivalent source circuit would contain a current source in parallel to the internal resistance, the current source being the short-circuited current across the shorted terminals of the load resistor. The Norton’s Equivalent circuit is represented as Finally the load current IL calculated by the equation shown below 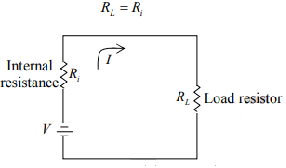 Power received at the load is 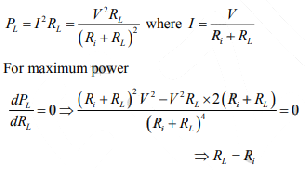 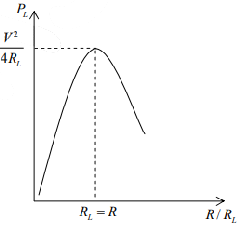 Wheatstone Bridge CircuitThe Wheatstone bridge can be used to measure an unknown resistance Rx . Switch S2 applies battery voltage to the four resistors in the bridge. To balance the bridge the value of R3 is varied. Balance is indicated by zero current in galvanometer G when switch S1 is closed. Note: When current flows through the meter path bc, the bridge circuit is unbalanced and must be analyzed by Kirchhoff’s laws or network theorems.