The document Theory & Procedure, Determination of EMF of a Cell Class 12 Notes | EduRev is a part of the Class 12 Course Chemistry Class 12.
All you need of Class 12 at this link: Class 12

Our objective is to study the variation of cell potential of Zn│Zn2+ ││Cu2+│Cu cell with change in the concentration of electrolytes (CuSO4 and ZnSO4) at room temperature. 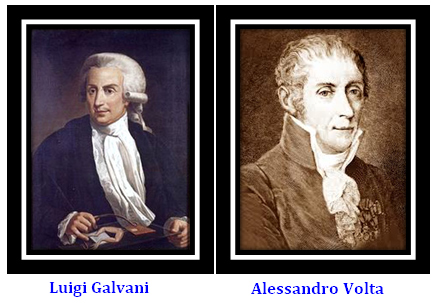 A galvanic cell is an important electrochemical cell. It is named after Luigi Galvani an Italian physicist. It is also called Voltaic cell, after an Italian physicist, Alessandro Volta. A galvanic cell generally consists of two different metal rods called electrodes. Each electrode is immersed in a solution containing its own ions and  these form a half cell. Each half cell is connected by a salt bridge, or separated by a porous membrane. The solutions in which the electrodes are immersed are called electrolytes.

The Daniell cell was invented by a British chemist, John Frederic Daniell. In the Daniell cell, copper and zinc electrodes are immersed in a solution of copper (II) sulfate (CuSO4 (aq)) and zinc (II) sulfate (ZnSO4 (aq)) respectively. The two half cells are connected through a salt bridge. Here zinc acts as anode and copper acts as cathode.

At the anode, zinc undergoes oxidation to form zinc ions and electrons.  The zinc ions pass into the solution. If the two electrodes are connected using an external wire, the electrons produced by the oxidation of zinc travel through the wire and enter into the copper cathode, where they reduce the copper ions present in the solution and form copper atoms that are deposited on the cathode.

The anodic reaction is represented as:

The cathodic reaction is represented as:

What is a Salt Bridge?

The salt bridge is usually an inverted U-tube filled with a concentrated solution of an inert electrolyte. The inert electrolyte is neither involved in any chemical change, nor does it react with the solutions in the two half cells.  Generally salts like, KCl, KNO3, NH4NO3 are used as the electrolyte.

How is a Salt Bridge made?

To prepare salt bridge, agar-agar or gelatin is mixed with a hot concentrated solution of electrolyte and is filled in the U-tube. On cooling, the solution sets in the form of a gel inside the U-tube and thus prevents the inter mixing of the fluids. The two ends of the U-tube are then plugged with cotton wool to minimise diffusion.

How is the electrical neutrality of the solutions in the two half cells maintained using a salt bridge?

In the anodic half cell, there will be accumulation of positive charge when the positive ions that are formed pass into the solution. To maintain the electrical neutrality, salt bridge provides negative ions.

For example, in Daniell cell, zinc oxidizes at the anode and passes into the solutions as Zn2+ ions, so there will be accumulation of positive charge in the solution. To maintain the electrical neutrality of the solution, the salt bridge provides negative ions (may be NO3- or Cl-).

In the cathodic half cell, there will be accumulation of negative ions formed due to the reduction of positive ions. To maintain the electrical neutrality, salt bridge provides postive ions.

For example, in Daniell cell, Cu2+ ions from the CuSO4 solution is reduced by the electron formed by the oxidation of zinc, and deposited on the copper cathode. As a result, the concentration Cu2+ ions decreases in the solution and that of SO42- ions (sulphate ions) increases. So there will be an accumulation of negatively charged sulphate ions around the cathode. To maintain the electrical neutrality, salt bridge provides positive ions (may be, K+ or NH4+).

Representation of an electrochemical cell: The cell notation

The following rules are followed for representing an electrochemical cell.

So Daniell cell is represented as:

If the concentration of both the electrolytes is 1 M, then the cell notation is: 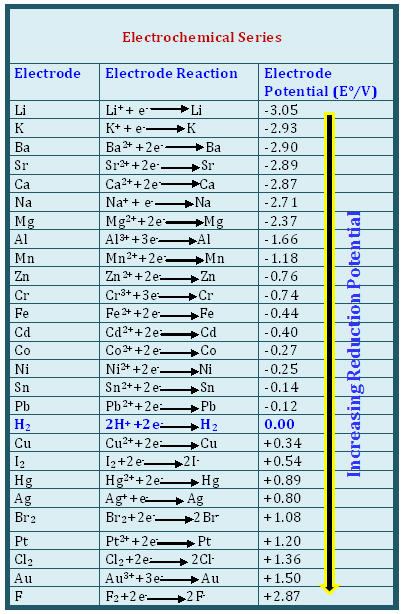 The potential difference between the two electrodes in a galvanic cell is called a cell potential or emf of the cell. It is measured in volts.

For example, emf of Daniell cell,

Determination of the emf of a cell: The Nernst Equation

Nernst equation relates the equilibrium potential of an half cell with the standard electrode potential, temperature, activity and reaction quotients of the reacting species. It is named after the German physical chemist Walther Nernst.

Nernst showed that for the electrode reaction;

, the electrode potential at any concentration measured with respect to SHE can be represented as:

is the electrode potential of the half cell,

is the standard electrode potential,

is the concentration of the metal,

is the concentration of the metal ion,

is the temperature in kelvin,

is the number of electron involved in the reaction, and

But the concentration of the solid M is taken as unity and substituting the values of R, F and T=298 K (Room Temperature), the above equation reduces to:

Calculation of emf of Daniell Cell

In Daniell cell, the electrode potentials of the half cells are written as: 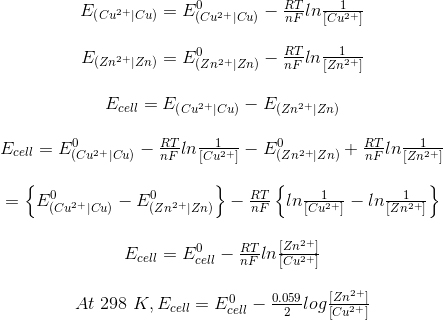 So Nernst equation is generally represented as:

is the activity (Concentration) of reduced species, and

is the activity (Concentration) of oxidised species.