Theory - To separate the Components of a Mixture of Ammonium Chloride, Salt and Sand, Chemistry Class 9 Notes | EduRev

Class 9 : Theory - To separate the Components of a Mixture of Ammonium Chloride, Salt and Sand, Chemistry Class 9 Notes | EduRev

The document Theory - To separate the Components of a Mixture of Ammonium Chloride, Salt and Sand, Chemistry Class 9 Notes | EduRev is a part of the Class 9 Course Science Class 9.
All you need of Class 9 at this link: Class 9

To separate the components of a mixture of ammonium chloride, salt and sand.

The variety of things with different sizes and shapes in our universe is made up of a material called matter.

Commonly,  “matter” is defined as anything that has a mass and a volume. Matter is made up of small particles. The air, food, plants, animals, stars and everything is matter. Matter commonly exists in three different states - solid, liquid and gas. These states of matter arise due to the variation in the characteristics of the particles of matter.

What is a solid state? 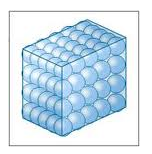 The branch of chemistry that deals with the synthesis, structure and properties of solid phase materials is called the Solid-state chemistry. It is also called materials chemistry. Solids have definite shape and volume. They are structurally rigid and resist the change of shape or volume. They have a tendency to maintain their shape when subjected to outside force. Unlike liquid, a solid object does not flow to take on the shape of its container. The atoms, molecules or ions which make up a solid may be arranged in an orderly repeating pattern (crystalline solid) or irregularly (amorphous solid).

What is a liquid state? 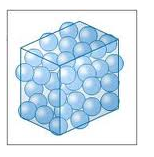 Liquids have no definite shape, but have a definite volume. They take up the shape of a container in which they are kept. As liquids flow, they change shape and they are not rigid. In liquid, particles move freely and the space between each particle is greater than that in solid state. Pure substances that are liquid under normal conditions include water, ethanol, etc. Density of a liquid is usually close to that of a solid, and much higher than that of a gas. At a temperature below the boiling point, any matter in liquid form will evaporate, and at a temperature below the freezing point, a liquid will tend to crystallize, changing to its solid form.

What is a gaseous state? 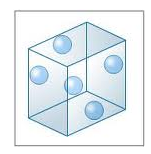 In the gaseous state, particles have no order of arrangement. Also gases have no definite shape. In the gaseous state, particles move randomly and hit the walls of the vessel and exert pressure on the walls of the container. Gases are highly compressible as compared to solids and liquids. Due to its high compressibility, large volumes of gas can be compressed into a small cylinder and transported easily. The liquefied petroleum gas (LPG) cylinder that we get in our home for cooking or the oxygen supplied to hospitals in cylinders is compressed gas.

Changes in states of a matter

Matter will change from one state to another at specific conditions of temperature and pressure. Following are the interconversions of the three states of matter. 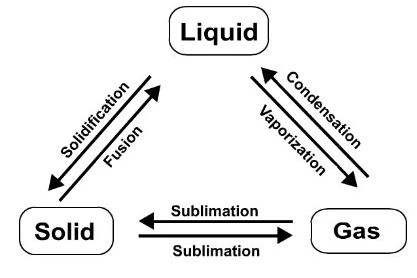 The inter-conversion of three states of matter is explained using the picture given right.

Most of the matter in our surroundings exists as mixtures of two or more components. Examples: milk, soil, sea water, etc. A mixture shows the properties of its constituent elements. The components of a mixture can be separated by physical methods like handpicking, filtration and so on. Sometimes special techniques have to be used for the separation of the components of a mixture.

Separation of components from a mixture of sand, ammonium chloride and salt

Sublimation is the process of transition of a substance from the solid to the gaseous state without passing through the liquid state. To separate mixtures that contain a sublimate with volatile component from a non-sublimate impurity, the sublimation process is used. Ammonium chloride changes directly from solid to gaseous state on heating. The gaseous form of ammonium chloride can be cooled easily to get a pure solid. Other examples of solids which sublime are camphor, naphthalene, anthracene, iodine, etc.

The remaining components of the mixture are salt and sand. Salt is soluble in water and sand is a non-water soluble substance that can be separated by the process of filtration. The insoluble sand remains in the filter paper while the filtrate contains the dissolved salt.

Evaporation technique is used to separate salt from the filtrate. Common salt does not decompose during evaporation. As the water evaporates, fewer and fewer water molecules are present to keep the salt particles apart. The salt therefore recrystallizes and can be collected.