INDIFFERENCE CURVE ANALYSISIn the last section, we have discussed the marginal utility analysis of demand. A very popular alternative and a more realistic method of explaining consumer’s demand is the ordinal utility approach used a different tool namely indifference curve to analyse consumer behaviour. This approach to consumer behaviour is based on consumer preferences. It believes that human satisfaction, being a psychological phenomenon, cannot be measured quantitatively in monetary terms as was attempted in Marshall’s utility analysis. In this approach, it is felt that it is much easier and scientifically more sound to order preferences than to measure them in terms of money.The consumer preference approach is, therefore, an ordinal concept based on ordering of preferences compared with Marshall’s approach of cardinality.Assumptions Underlying Indifference Curve Approach(i) The consumer is rational and possesses full information about all the relevant aspects of economic environment in which he lives.(ii) The indifference curve analysis assumes that utility is only ordinally expressible. The consumer is capable of ranking all conceivable combinations of goods according to the satisfaction they yield. Thus, if he is given various combinations say A, B, C, D and E, he can rank them as first preference, second preference and so on. However, if a consumer happens to prefer A to B, he cannot tell quantitatively how much he prefers A to B.(iii) Consumer’s choices are assumed to be transitive. If the consumer prefers combination A to B, and B to C, then he must prefer combination A to C. In other words, he has a consistent consumption pattern.(iv) If combination A has more commodities than combination B, then A must be preferred to B. 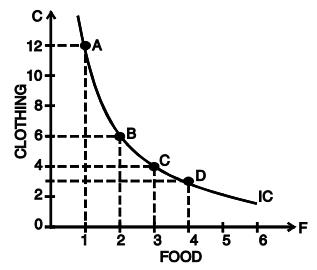 Marginal Rate of Substitution
Marginal Rate of Substitution (MRS) is the rate at which a consumer is prepared to exchange goods X and Y. Consider Table-8. In the beginning the consumer is consuming 1 unit of food and 12 units of clothing. Subsequently, he gives up 6 units of clothing to get an extra unit of food, his level of satisfaction remaining the same. The MRS here is 6. Likewise when he moves from B to C and from C to D in his indifference schedule, the MRS are 2 and 1 respectively. Thus, we can define MRS of X for Y as the amount of Y whose loss can just be compensated by a unit gain of X in such a manner that the level of satisfaction remains the same.
The marginal rate of substitution of X for Y (MRSxy) is equal to

Properties of Indifference Curves
The following are the main characteristics or properties of indifference curves:
(i) Indifference curves slope downward to the right: This property implies that the two commodities can be substituted for each other and when the amount of one good in the combination is increased, the amount of the other good is reduced. This is essential if the level of satisfaction is to remain the same on an indifference curve.
(ii) Indifference curves are always convex to the origin : It has been observed that as more and more of one commodity (X) is substituted for another (Y), the consumer is willing to part with less and less of the commodity being substituted (i.e. Y). This is called diminishing marginal rate of substitution. Thus, in our example of food and clothing, as a consumer has more and more units of food, he is prepared to forego less and less units of clothing. This happens mainly because the want for a particular good is satiable and as a person has more and more of a good, his intensity of want for that good goes on diminishing. In other words, the subjective value attached to the additional quantity of a commodity decreases fast in relation to the other commodity whose total quantity is decreasing. This diminishing marginal rate of substitution gives convex shape to the indifference curves. However, there are two extreme situations. When two goods are perfect substitutes of each other, the indifference curve is a straight line on which MRS is constant. And when two goods are perfect complementary goods (e.g. printer and cartridge), the indifference curve will consist of two straight lines with a right angle bent which is convex to the origin, or in other words, it will be L shaped
(iii) Indifference curves can never intersect each other:No two indifference curves will intersect each other although it is not necessary that they are parallel to each other. In case of intersection the relationship becomes logically absurd because it would show that higher and lower levels are equal, which is not possible. This property will be clear from Figure 15. 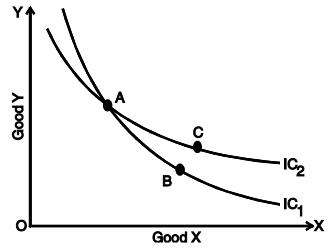 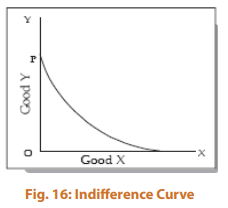