For thick cylinders such as guns, pipes to hydraulic presses, high pressure hydraulic pipes the wall thickness is relatively large and the stress variation across the thickness is also significant. In this situation the approach made in the previous section is not suitable. The problem may be solved by considering an axisymmetry about z-axis and solving the differential equations of stress equilibrium in polar co-ordinates. In general the stress equations of equilibrium without body forces can be given as

For axisymmetry about z-axis

In a plane stress situation if the cylinder ends are free to expand σz = 0 and due to uniform radial deformation and symmetry τrz = τθz = τrθ = 0. The equation of equilibrium reduces to

It is convenient to solve the general equation so that a variety of problems may be solved. Now as shown in figure- 9.2.1.1, the strains εr and εθ may be given by Now from equation (4) we may write

and combining this with equation (7) we may arrive at

A typical case is shown in figure- 9.2.1.2. A standard solution for equation (9) is σr = crn where c and n are constants. Substituting this in equation (9) and also combining with equation (3) we have

where c1 and c2 are constants. 9.2.1.2F- A thick cylinder with both external and internal pressure

Boundary conditions for a thick cylinder with internal and external pressures pi and po respectively are:

The negative signs appear due to the compressive nature of the pressures. This gives

It is important to remember that if σθ works out to be positive, it is tensile and if it is negative, it is compressive whereas σr is always compressive irrespective of its sign. Stress distributions for different conditions may be obtained by simply substituting the relevant values in equation (11). For example, if po = 0 i.e. there is no external pressure the radial and circumferential stress reduce to

The stress distribution within the cylinder wall is shown in figure- 9.2.1.3. 9.2.1.3F- Radial and circumferential stress distribution within the cylinder wall when only internal pressure acts.

It may be noted that σr + σθ = constant and hence the deformation in z-direction is uniform. This means that the cross-section perpendicular to the cylinder axis remains plane. Hence the deformation in an element cut out by two adjacent cross-sections does not interfere with the adjacent element. Therefore it is justified to assume a condition of plane stress for an element in section 9.2.1.

If pi = 0 i.e. there is no internal pressure the stresses σr and σθ reduce to 9.2.1.4F- Distribution of radial and circumferential stresses within the cylinder wall when only external pressure acts.

This means that as pi increases σθ may exceed yield stress even when pi < σyield. Furthermore, it can be shown that for large internal pressures in thick walled cylinders the wall thickness is required to be very large. This is shown schematically in figure 9.2.2.1. This means that the material near the outer edge is not effectively used since the stresses near the outer edge gradually reduce (Refer to figure- 9.2.1.3). 9.2.2.1F- A schematic variation of wall thickness with the internal pressure in a thick walled cylinder.

In order to make thick-walled cylinders that resist elastically large internal pressure and make effective use of material at the outer portion of the cylinder the following methods of pre-stressing are used:

1. Shrinking a hollow cylinder over the main cylinder.2. Multilayered or laminated cylinders.3. Autofrettage or self hooping.

Here the main problem is to determine the contact pressure ps. At the contact surface the outer radius rsi of the inner cylinder is slightly larger than the inside diameter rso of the outer cylinder. However for stress calculations we assume that  rso ≌  rsi = rs (say). The inner and outer cylinders are shown in figure- 9.2.2.2. 9.2.2.2F- Dimensions and the pressures at the contact surface of the internal and outer cylinders.

The total interference δ at the contact is therefore given by

Stresses due to fluid pressure must be superimposed on this to find the complete stress distribution.

The laminated cylinders are made by stretching the shells in tension and then welding along a longitudinal seam. This is shown in figure- 9.2.2.4. 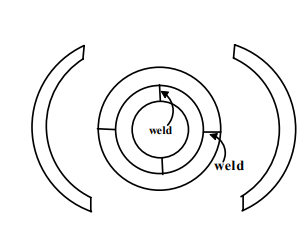 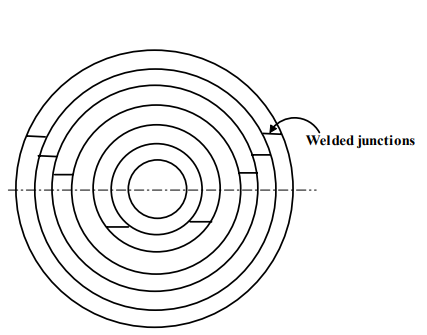 In some applications of thick cylinders such as gun barrels no inelastic deformation is permitted. But for some pressure vessel design satisfactory function can be maintained until the inelastic deformation that starts at inner bore spreads completely over the wall thickness. With the increase in fluid pressure yielding would start at the inner bore and then with further increase in fluid pressure yielding would spread outward. If now the pressure is released the outer elastic layer would regain its original size and exert a radial compression on the inner shell and tension on the outer region.