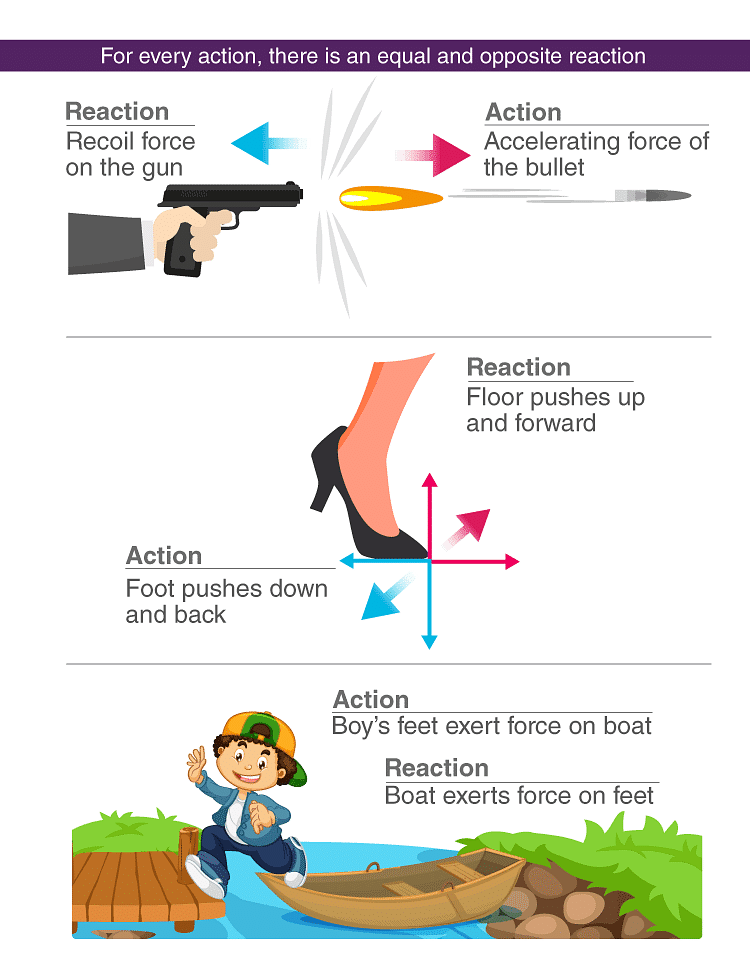 You probably know that when you throw a ball against a wall, the ball exerts a force on the wall. Likewise, the wall puts force on the ball as a result of which the ball bounces off the wall. Similarly, earth pulls you down with gravitational force. What you may not realize is you are also exerting an equal amount of force on the earth. This remarkable fact is a consequence of Newton’s third law.

Newton’s 3rd Law: If an object A exerts a force on object B, then object B must exert a force of equal magnitude and opposite direction back on object A.This law signifies a particular symmetry in nature: forces always occur in pairs, and one body cannot exert a force on another without experiencing a force itself. In the next few sections, let us learn Newton’s third law in detail.

Force is a push or pull acting on an object resulting in its interaction with another object. Force is a result of an interaction. Force can be classified into two categories: contact force such as frictional force and non-contact force such as gravitational force. According to Newton, when two bodies interact, they exert force on each other, and these forces are known as action and reaction pairs, which is explained in Newton’s third law of motion. Newton’s third law of motion states that

Aswini and Deepa are standing on identical skateboards. Aswini and Deepa push off of each other and travel in opposite directions. If Aswini (M) and Deepa (m) have identical masses, who travels farther?Answer: Neither. Both will travel the same distance because the force applied to each will be the same.Ma = maa = aAcceleration controls how far each of them will travel. Since both have the same acceleration, they travel equal distance.The mathematical representation of Newton’s third law of motion is let A be the body exerting force

on the body B, then body B too exerts a force

on body A, which is given as:

Newton’s third law of motion is associated with conservation of momentum. According to the law for every action, there must be an equal and opposite reaction.

A variety of action-reaction pairs are evident in nature. We have listed a few below, and they are as follows:

The document Third Law of Motion Notes | Study Physics Class 11 - NEET is a part of the NEET Course Physics Class 11.
All you need of NEET at this link: NEET
Join Course