The document Thrust and Pressure Class 9 Notes | EduRev is a part of Class 9 category.
All you need of Class 9 at this link: Class 9

Thrust is a vector quantity. 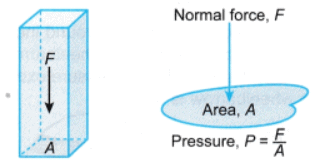 Factors affecting the pressure: The pressure exerted on the surface depends on:

(2) the area on which the thrust is applied

The pressure on a surface is increased by making the area of surface small on which the thrust acts.

Similarly, the pressure on a surface is reduced by making the area of surface large on which the thrust acts.