• The wavefunction can be expanded by unperturbed solutions:

• Probability of particle at n=2 at time t: 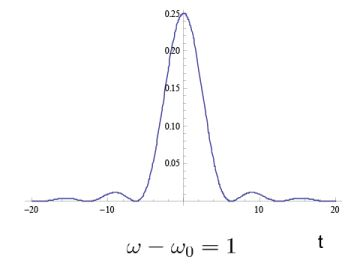 if there is no perturbation, we have:

namely, in the interaction picture, the state does not change as time if there is no perturbation. Now it is easy to show that

The time dependence of states in the interaction picture depends on HI .

We can obtain the solution by iterating. We replace

in the right side of equation according to equation,

The process can repeat again and again to obtain infinite order.The first order is given in the first line. Assuming the system at |n> at t=0, the probability for a system at state |m> at time t  is given

Therefore, we can view g(x,t) as t goes to infinity,

Transition rate: probability for transition in a unit time interval!

It is an energy conserved process!!In many cases,  we consider a transition rate associated with an initial state,

Life time of an state

The excited state can radiate through interaction with matter. We can introduce a lifetime of an excited state due to spontaneous emission:

When we know the quantum number or symmetry of the states and know the  symmetry of perturbation potential, then  we can determine the allowed transition. This rule is called selection rule.

Example one: Scattering in One-Dimension