Question 2. The uniform arrival and uniform service rates observed on an approach road to a signalized intersection are 20 and 50 vehicles/minute, respectively. For this signal, the red time is 30 s, the effective green time is 30 s, and the cycle length is 60 s. Assuming that initially there are no vehicles in the queue, the average delay per vehicle using the approach road during a cycle length (in s, round off to 2 decimal places) is______ .    [2019 : 2 Marks, Set-II]Solution: Arrival rate = 20 veh/minService rate = 50 veh/minR= 30 sec, G1 = 30 sec, Cycle length = 60sec 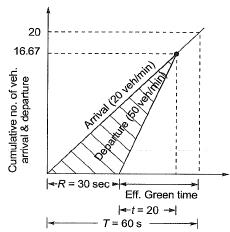 Question 3. A vehicle is moving on a road of grade +4% at a speed of 20 m/s. Consider the coefficient of rolling friction as 0.46 and acceleration due to gravity as 10 m/s2. On applying brakes to reach a speed of 10 m/s, the required braking distance (in m, round off to nearest integer) along the horizontal, is     [2019 : 1 Mark, Set-II]Solution: Question 4.  The speed-density relationship in a mid-block section of a highway follows the Greenshield's model. If the free flow speed is vf and the jam density is kj, the maximum flow observed on this section is(a)

Question 5. Traffic on a highway is moving at a rate of 360 vehicles per hour at a location. If the number of vehicles arriving on this highway follows Poisson distribution, the probability (round off to 2 decimal places) that the headway between successive vehicles lies between 6 and 10 seconds is_______.    [2019 : 2 Marks, Set-I]
Solution: The shape of the flow-density relationship is
(a) piecewise linear
(b) parabolic
(c) initially linear then parabolic
(d) initially parabolic then linear
Answer: (c)
Solution:

Question 14. The queue length (in number of vehicles) versus time (in seconds) plot for an approach to a signalized intersection with the cycle length of 96 seconds is shown in the figure (not drawn to scale). Question 15. Vehicles arriving at an intersection from one of the approach roads follow the Poisson distribution. The mean rate of arrival is 900 vehicles per hour. If a gap is defined as the time difference between two successive vehicle arrivals (with vehicles assumed to be points), the probability (up to four decimal places) that the gap is greater than 8 seconds is __________.     [2017 : 1 Mark, Set-I]
Solution:
λ = 900 veh/hour