A majority of the metro cities in India are facing the problem of traffic congestion, delays, which have further resulted in pollution. The delays are caused mainly due to the isolated functioning of the traffic signals at closely located intersections. For better regulation of traffic flow at these intersections, the traffic signals need to be coordinated or linked. For the linking of signals, the vehicle movement characteristics from upstream signal to downstream signal need to be considered and simulated. Traffic Progression Models model the vehicle movement characteristics and help in the linking of signals. First, the concept of platoon, platoon variables is discussed and then platoon ratio is defined which is required for determination of arrival type. Then, the phenomenon of platoon dispersion and platoon dispersion model is introduced for understanding dispersion behavior of the vehicles. Finally, one of the platoon dispersion models i.e., Roberson’s platoon dispersion model is discussed, which estimates the vehicle arrivals at downstream locations based on an upstream departure profile. 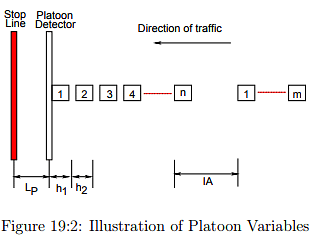 • Platoon Size (Np): It is the number of vehicles in a platoon.

• Platoon Headway (hp): It is the average value of headways within a platoon.

• Platoon Speed (Vp): It is the average speed of all the vehicles within a platoon.

that sufficient platoon information can be obtained within a proper detection area. Research has shown that headways are rarely less than 0.5 seconds or over 10 seconds at different traffic volumes. Many investigations have been done on finding the effects of critical headways of 1.2, 1.5, 2.1 and 2.7 seconds on platoon behaviour and these investigations have shown that a critical headway of 2.1 seconds corresponding to a traffic volume of 1500 vehicles per hour per lane (vphpl) can be taken for data collection.

The platoon ratio denoted as Rp, is a numerical value used to quantify the quality of progression on an approach. The platoon ratio represents the ratio of the number of vehicles arriving during the green phase to the proportion of the green interval of the total cycle. This is given by

where, P = Proportion of all vehicles during green time, C = Cycle length, g = Effective green time. Its value ranges from 0.5 to 2.0. It is used in the calculation of delays, capacity of an approach. The arrival types range from 1 (worst platoon condition) to 6 (the best platoon condition). The platoon ratio approximates the arrival type and the progression quality. For example HCM (2000) has suggested the following relationship between platoon ratio and arrival which is as shown in Table 19:1.

As a platoon moves downstream from an upstream intersection, the vehicles disperse i.e., the distance between the vehicles increase which may be due to the differences in the vehicle speeds, 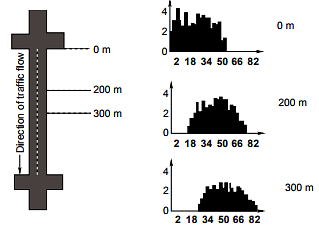 ehicle interactions (lane changing and merging) and other interferences (parking, pedestrians, etc.,). This phenomenon is called as Platoon Dispersion.

Platoon dispersion models simulate the dispersion of a traffic stream as it travels downstream by estimating vehicle arrivals at downstream locations based on an upstream vehicle departure profile and a desired traffic-stream speed. There are two kinds of mathematical models describing the dispersion of the platoon, namely: 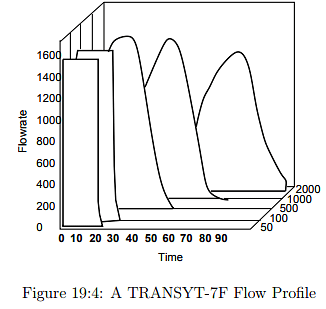 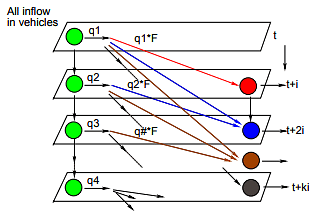 flows from other intersections. Note that the Robertson’s platoon dispersion equation means that the traffic flow q d t , which arrives during a given time step at the downstream end of a link, is a weighted combination of the arrival pattern at the downstream end of the link during the previous time step q d t−n and the departure pattern from the upstream traffic signal T seconds ago qt−T . Fig. 19:5 gives the graphical representation of the model. It clearly shows that predicated flow rate at any time step is a linear combination of the original platoon flow rate in the corresponding time step (with a lag time of t) and the flow rate of the predicted platoon in the step immediately preceding it. Since the dispersion model gives the downstream flow at a given time interval, the model needs to be applied recursively to predict the flow. Seddon developed a numerical procedure for platoon dispersion. He rewrote Robertson’s equation as,

Equation 19.5 demonstrates that the value of the travel time factor (β) is dependent on the value of the platoon dispersion factor (α) and thus a value of 0.8 as assumed by Robertson results in inconsistencies in the formulation. Further, the model requires calibration of only one of them and the other factors can be obtained subsequently. 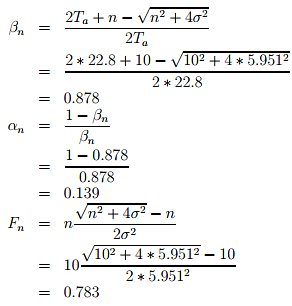 Upstream Flows: Since the modelling time step duration is given as n=10 sec, the given upstream flows can be written as follows:

Downstream Flows: On the downstream, at 10 sec the flow will be zero since the modelling step duration is 10 sec. Hence the downstream flows can be written as follows.

Similarly, downstream flows can be written till 80 sec. Note that since n=10 sec, T is taken in units of n. The minimum travel time (T) is given as 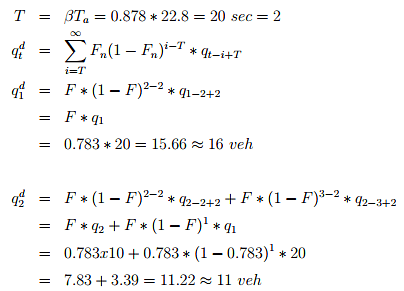 Calculating on similar lines, we get 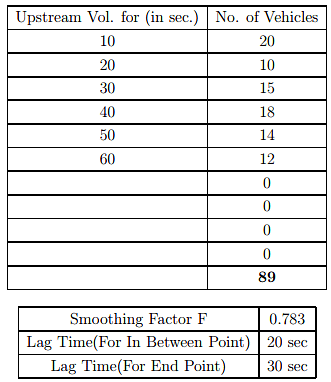 Initially, the concept of platoon and platoon variables was discussed. The platoon variables are required for the determination of critical headway which further helps in platoon identification. Then, the platoon ratio was defined which helps us in identifying the arrival type. Later,