A bipolar junction transistor (BJT) is a three terminal device  in which operation depends on the interaction of both majority and minority carriers and hence the name bipolar.  The BJT is analogus to vacuum triode and is comparatively smaller in size. It is used in  amplifier and oscillator circuits, and as a switch in digital circuits. It has wide applications in computers, satellites and other modern communication systems.

CONSTRUCTION OF BJT AND ITS SYMBOLS

The Bipolar Transistor basic construction consists of two PN-junctions producing three connecting terminals with each terminal being given a name to identify it from the other two. These three terminals are known and labelled as the Emitter ( E ), the Base ( B ) and the Collector ( C ) respectively. There are two basic types of bipolar transistor construction, PNP and NPN, which basically describes the physical arrangement of the P-type and N-type semiconductor materials from which they are made.

Transistors are three terminal active devices made from different semiconductor materials that can act as either an insulator or a conductor by the application of a small signal voltage. The transistor's ability to change between these two states enables it to have two basic functions: "switching" (digital electronics) or "amplification" (analogue electronics). Then bipolar transistors have the ability to operate within three different regions:

Bipolar Transistors are current regulating devices that control the amount of current flowing through them in proportion to the amount of biasing voltage applied to their base terminal, acting like a current-controlled switch. The principle of operation of the two transistor types PNP and NPN is exactly the same, the only difference being in their biasing and the polarity of the power supply for each type(fig 1). 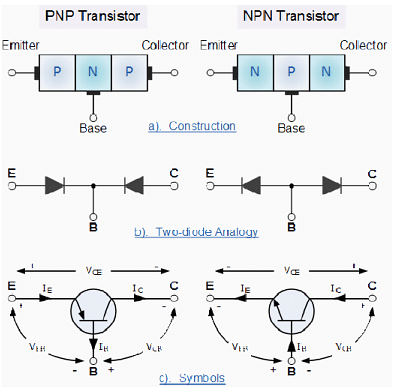