The network is divided into 16 zones. Divisions are basic operating units. The 16 zones are their respective headquarters are given below.

• With a total length of about 42.3 lakh km, India has one of the largest road networks in the world.About 85% of passenger and 70% of freight traffic are carried by roads.

• State Highways are constructed and maintained by the state governments.

• Inland Waterways Authority was set up in 1986 for the development, maintenance, and regulation of national waterways in the country.

• Ocean transport is the most important water transport, because it has certain advantages over land carriage. The sea offers a ready-made carriageway for ships which, unlike the roadway or railway, requires no maintenance.

• Water surfaces are two-dimensional and, although sea-going vessels frequently keep to shipping lanes, ships can travel, within a limited number of constraints, in any direction. 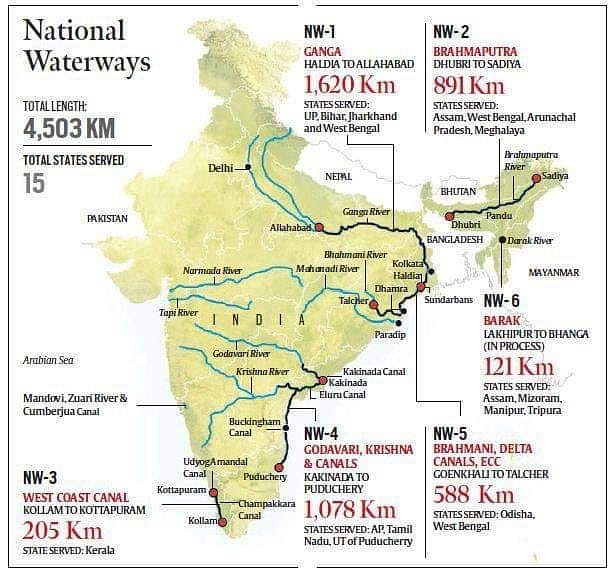 • Air transport in India marked its beginning in 1911 with the commencement of airmail over a little distance of 10 km between Allahabad and Naini.

• Pawan Hans is the helicopter service operating in hilly areas and is widely used by tourists in north-eastern regions.

• At present, India has 12 major ports and 185 minor or intermediate ports.

• Mumbai has a natural harbor and it is the biggest seaport of the country.

Oil and gas industry in India imports 82% of its oil needs and aims to bring that down to 67% by 2022 by replacing it with local exploration, renewable energy and indigenous ethanol fuel (Jan 2018).

• The purpose of the system was two fold: to reduce the cost of spaceflight by replacing the current method of launching capsules on expendable rockets with reusable spacecraft; and to support ambitious follow-on programs including permanent orbiting space stations around the Earth and Moon, and a human landing mission to Mars.