(i) Alveoli to blood

(ii) Between blood and tissues.

Transport Of Gases In Blood

Some gases (e.g. Ozone) oxidise haemoglobin. This oxidised haemoglobin is called Methaemoglobin .This is a colourless compound. This type of gases are environmental pollutant. At the time, oxyhaemoglobin reaches upto the tissues it dissociates. O2 freed from it goes into the tissue fluid from blood. In place of it, CO2 from tissue fluid comes into blood. Gaseous exchange between blood and tissue is called internal respiration or tissue respiration. It is also done by simple diffusion. In a conducting cycle blood gives its 25% O2 to tissues.Dissociation of oxyhaemoglobin is affected by so many factors – 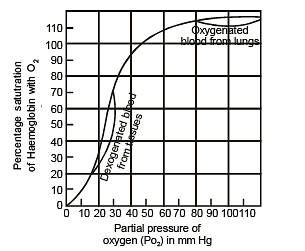 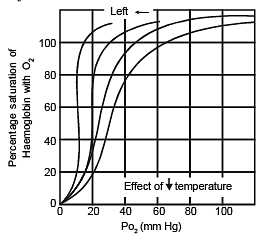 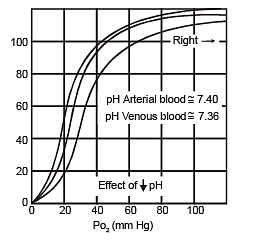 Shift to left Means that higher saturation levels of Hb with oxygen (forming oxyhaemoglobin) can be achieved at lower PO2. This is due to increase in affinity between O2 and Hb (which may be due to

Shift to Right Means that higher PO2 levels  are required to achieve the same saturation level which was previously being achieved at lower PO2. This is due to decrease in affinity between O2 & Hb. (which may be due to

Hb can not take up O2 beyond a saturation level of 97%.

During heavy exercise : muscle cell use O2 at a rapid rate.

(b) In the form of bicarbonate : Carbon dioxide produced by the tissues, diffuses passively into the blood stream and passes into the red blood corpuscles, where it reacts with water to form carbonic acid (H2CO3). This reaction is catalysed by the enzyme, carbonic anhydrase, found in the erythrocytes, and takes less than one second to complete the process. Immediately after its formation, carbonic acid dissociates into Hydrogen (H+) and bicarbonate (HCO3–) ions. 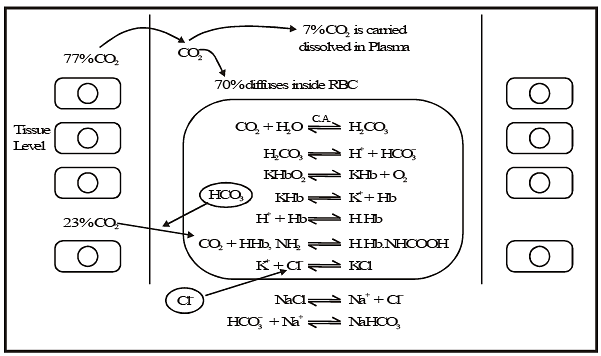 The oxyhaemoglobin (HbO2) of the erythrocytes is weekly acidic and remains in association with K+ ions as KHbO2. The hydrogen ions (H+) released from carbonic acid combine with haemoglobin after its dissociation from the potassium ions.

The majority of bicarbonate ions (HCO3–) formed within the erythrocytes diffuse out into the plasma along a concentration gradient. H+ combine with haemoglobin to form the haemoglobinic acid (H.Hb).

In response, chloride ions (Cl–) diffuse from plasma into the erythrocytes to maintain the ionic balance. Thus, electrochemical neutrality is maintained. This is called Chloride shift or Hamburger Phenomenon. The chloride ions (Cl–) inside RBC combine with potassium ions (K+) to form potassium chloride (KCl), whereas hydrogen carbonate ions (HCO3–) in the plasma combine with Na+ to form sodium hydrogen carbonate (NaHCO3). Nearly 70 per cent of carbon dioxide is transported from tissues to the lungs in this form.

When bicarbonates and carbamino compounds reach in the lungs, then they dissociate. Thus CO2 is formed.