Mainly three types of arches are used in practice: three-hinged, two-hinged and hingeless arches. In the early part of the nineteenth century, three-hinged arches were commonly used for the long span structures as the analysis of such arches could be done with confidence. However, with the development in structural analysis, for long span structures starting from late nineteenth century engineers adopted two-hinged and hingeless arches. Two-hinged arch is the statically indeterminate structure to degree one. Usually, the horizontal reaction is treated as the redundant and is evaluated by the method of least work. In this lesson, the analysis of two-hinged arches is discussed and few problems are solved to illustrate the procedure for calculating the internal forces.

A typical two-hinged arch is shown in Fig. 33.1a. In the case of two-hinged arch, we have four unknown reactions, but there are only three equations of equilibrium available. Hence, the degree of statical indeterminacy is one for two hinged arch. 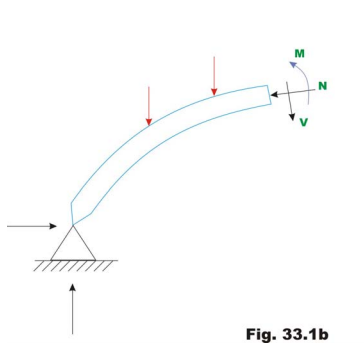 The fourth equation is written considering deformation of the arch. The unknown redundant reaction Hb is calculated by noting that the horizontal displacement of hinge B is zero. In general the horizontal reaction in the two hinged arch is evaluated by straightforward application of the theorem of least work (see module 1, lesson 4), which states that the partial derivative of the strain energy of a statically indeterminate structure with respect to statically indeterminate action should vanish. Hence to obtain, horizontal reaction, one must develop an expression for strain energy. Typically, any section of the arch (vide Fig 33.1b) is subjected to shear force V , bending moment M and the axial compression N. The strain energy due to bending Ub is calculated from the following expression.

The total strain energy of the arch is given by,

Now, according to the principle of least work

where H is chosen as the redundant reaction. 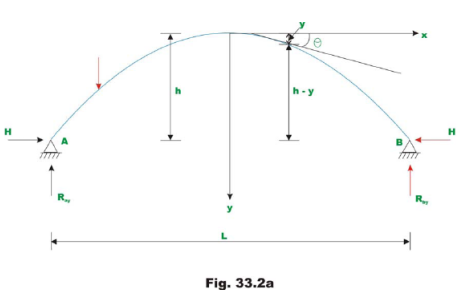 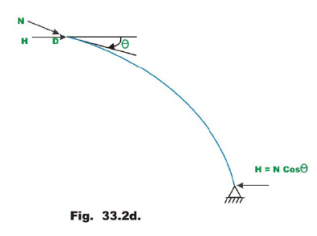 Where θ is the angle made by the tangent at D with horizontal (vide Fig 33.2d). Substituting the value of M and N in the equation (33.4),

As axial rigidity is very high, the second term in the denominator may also be neglected. Finally the horizontal reaction is calculated by the equation

For an arch with uniform cross section EI is constant and hence,

In the above equation, M0 is the bending moment at any cross section of the arch when one of the hinges is replaced by a roller support.

is the height of the arch as shown in the figure. If the moment of inertia of the arch rib is not constant, then equation (33.10) must be used to calculate the horizontal reaction H .