The document Types of Bonding Class 11 Notes | EduRev is a part of the Course Chemistry Class 11.

These types of bonds in chemical bonding are formed from the loss, gain, or sharing of electrons between two atoms/molecules.

When a bond is formed by complete transference of electrons from one atom to another so as to complete their outermost orbits by acquiring 8 electrons (i.e., octet) or 2 electrons (i.e., duplet) in case of hydrogen, lithium etc. and hence acquire the stable nearest noble gas configuration, the bond formed is called ionic bond or electrovalent bond.Explanation of Ionic BondAtoms are electrically neutral. Therefore, they possess equal number of protons and electrons. On losing an electron, an atom becomes positively charged since now the number of protons exceeds the number of electrons.

On the other hand, in case of atom, gaining the electron, the number of electrons exceeds the number of protons and thus the atom becomes negatively charged.

The oppositely charged particles formed above attract each other by electrostatic forces of attraction. The bond thus formed is known as electrovalent or ionic bond. 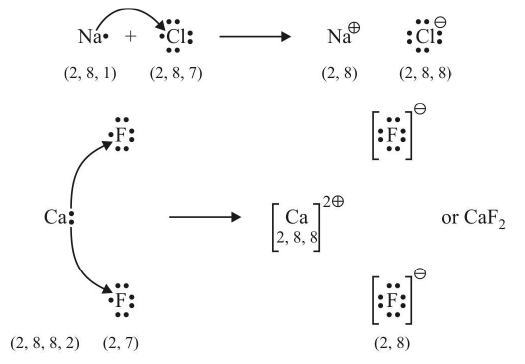 Factors governing the formation of ionic bonds(i) Ionisation Enthalpy (Ionization Energy)Ionisation enthaly of any element is the amount of energy required to remove an electron from the outermost shell of an isolated atom in gaseous phase so as to convert it into a gaseous positive ion.

It is clear that lesser the ionisation enthalpy, easier will be the removal of an electron, i.e., formation of a positive ion and hence greater the chances of formation of an ionic bond.

Ionisation enthalpy (I.E.) of alkali metals (i.e., group I elements) is low, hence they have more tendency to form positive ions.(ii) Electron Gain Enthalpy (Electron Affinity)Electron affinity or Electron gain enthalpy of an element is the enthalpy change that takes place when an extra electron is added to an isolated atom in the gaseous phase to form a gaseous negative ion.

Higher is the electron affinity, more is the energy released and stabler will be the negative ion produced. Consequently, the probability of formation of ionic bond will be enhanced.

A+ (g) + B– (g) → A+ B– (s) The energy released when the requisite number of gaseous positive and negative ions combine to form one mole of the ionic compound is called lattice enthalpy.

2. Crystal StructureX-ray analysis of the ionic compounds shows that they exist as ions and not as molecules. These ions are arranged in a regular pattern in the three dimensional space to form a lattice.The pattern of arrangement, however, depends upon the size and charges of the ions. For example, in case of sodium chloride, each sodium ion is surrounded by six chloride ions and each chloride by six sodium ions, thus giving rise to a three dimensional octahedral crystal structure (figure). The formula of an ionic compound merely indicates the relative number of ions present. 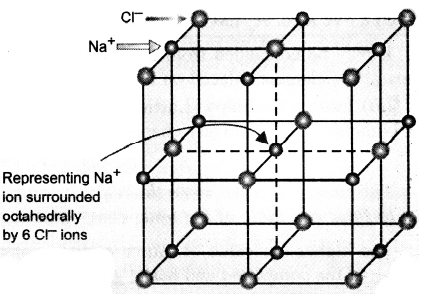 This is because ions are tightly held together by strong electrostatic forces of attraction and hence a huge amount of energy is required to break the crystal lattice.

4. SolubilityElectrovalent compounds are soluble in solvents like water which are polar in nature and have high dielectric constant.

It is due to the reason that the polar solvent interacts with the ions of the crystals and further the high dielectric constant of the solvent (i.e., capacity of the solvent to weaken the forces of attraction) cuts off the force of attraction between these ions. Furthermore, the ions may combine with the solvent to liberate energy called the hydration enthalpy which is sufficient to overcome the attractive forces between the ions.Non-polar solvents like carbon tetrachloride, benzene etc. having low dielectric constants are not capable of dissolving ionic solids. Hence, ionic solids are soluble in polar solvents and insoluble in non-polar solvents.5. Electrical conductivityIonic compounds are good conductors of electricity in solution or in the molten state. In solution or molten state, their ions are free to move. As the ions are charged, they are attracted towards electrodes and thus act as carriers of electric current.

6. Ionic ReactionsThe reactions of the ionic compounds are, in fact, the reactions between the ions produced in solution. As the oppositely charged ions combine quickly, these reactions are, therefore, quite fast.[e.g. Na+ Cl– (aq) + Ag+ NO3– (aq) → AgCl (s) + NaNO3 (aq)]

Covalent BondThe bond formed between the two atoms by mutual sharing of electrons between them so as to complete their octets or duplets in case of elements having only one shell is called covalent bond or covalent linkage and the number of electrons contributed by each atom is known as covalency. 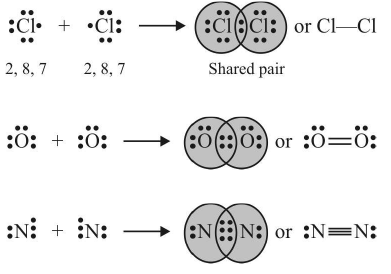 Generally, the covalency of an element is equal to. the total number of unpaired electrons in s- and p-orbitals of the valency shell.

variable covalency by increasing the number of unpaired electrons under excited conditions, i.e., unpairing the paired orbital and shifting the electrons to. vacant d-orbitals.

Step-2: Skeletal structure is HCN (C is least electronegative).Step-3: Putting one shared pair of electrons between H and C and one between C and N, and the remaining as lone pairs, we have

In this structure, duplet of H is complete but octets of C and N are not complete. Hence, multiple bonding is required between and N. Octets of C and N will be complete if there is triple bond between C and N. Thus,

Step-4: Putting one shared pair of electrons between each C and O and completing the octets of oxygen, we have

Table: Lewis structures of some typical molecules and ions 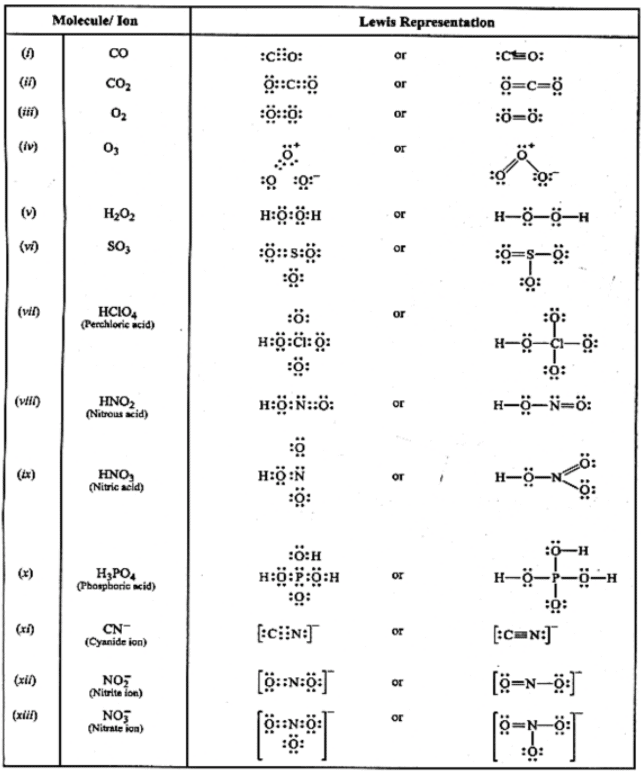 Table: Lewis structures of some typical molecules and ions

Once the coordinate bond is formed it is indistinguishable from a covalent bond. Examples: 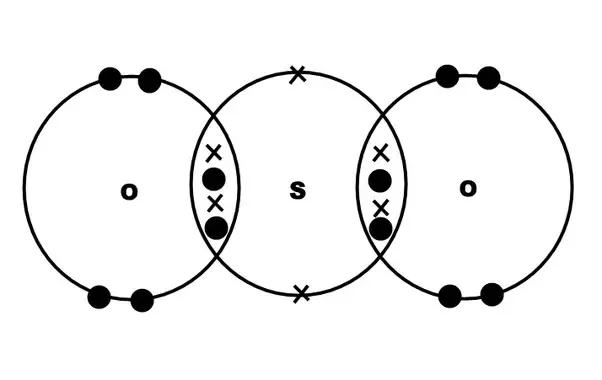