The document Types of Meeting - Company Meetings (Part - 1) - Company Law B Com Notes | EduRev is a part of the B Com Course Company Law.
All you need of B Com at this link: B Com

The company is an artificial person created by law having a separate entity distinct from its members. Being an artificial person, it cannot take decisions on its own. It has to take decisions on matters relating to its well being by way of resolutions passed at properly constituted and convened meetings of its shareholders or directors. The decisions about a company's management are taken by the directors in their meetings and they are to be ratified in the general meetings of the company by the shareholders.

The meetings of a company are of three kinds :

1. Meetings of the shareholders

2. Meetings of the Directors

3. Meetings of the Creditors 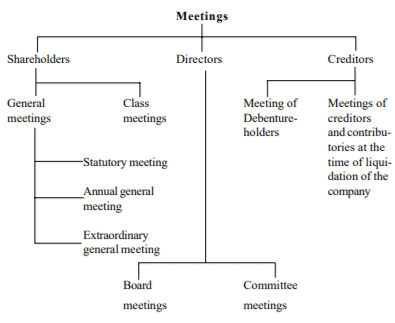 Every public company limited by shares and every company limited by guarantee and having a share capital, shall, within a period of not less than one month nor more than six months from the date on which the company is entitled to commence business hold a general meeting of the members of the company. This meeting is called 'the statutory meeting'. [Sec. 165 (1)]

(b) If the company has no share capital, holding not less than 95% of the total voting power exercisable at the meeting.

The Board of Directors is required to prepare a report which is known as the 'statutory report" and must send this report to the members at least 21 days before the day on which the meeting is to be held [Section 165(2)]. If the report is sent later than is required, it will be deemed to have been duly forwarded if it is so agreed to by all the members entitled to attend and vote at the meeting. Thus the delay in sending the report can be condoned by unanimous consent of all the members present at the meeting. The statutory report is required to be certified as correct by at least two directors of the company, one of whom must be a Managing Director, if there is any. Thereafter the auditor must certify the report to be correct in so far as it relates to the shares allotted by the company, the cash received in respect of such shares and the receipts and payments of the company [Section 165(4)]. A copy of the report must be sent to the Registrar also [Section 165(5)].

The statutory report shall set out :

(a) The total number of shares allotted, distinguishing those allotted as fully or partly paid-up otherwise than in cash, the extent to which they are partly paid up and the consideration for which they have been allotted.

(b) The total amount of cash received by the company in respect of all the shares allotted.

(c) An abstract of the receipts and payments made thereout up to a date within 7 days of the date of the report.

(d) The name, address and occupations of the directors of the company and of its auditors and also if there be any, of its manager and secretary.

(e) The particulars of any contract which , or the modification or the proposed modification of which is to be submitted to the meeting for its approval.

(f) The extent to which each underwriting contract (if any) has not been carried out and the reason therefor.

(g) The arrears due on cash from every director and from the manager.

(h) Particulars of any commission or brokerage paid or to be paid in connection with the issue or sale of shares or debentures to any director.

Procedure at the meeting

A list showing the names, addresses and occupation of the members of the company and the number of shares held by them must be produced by the Board of Directors at the commencement of the statutory meeting. The list is to remain open and accessible to any member of the company during the continuance of the meeting [Section 165 (6)].

It is to be noted that the members of the company present at the meeting are at liberty to discuss any matter relating to the formation of the company or arising out of the statutory report, whether previous notice has been given or not but one resolution may be passed of which notice has not been given in accordance with the provisions of Companies Act. [Sec. 165 (7)]

The meeting may adjourn from time to time and at any adjourned meeting any resolution of which notice has been given in accordance with the provisions of the Companies Act may be passed and the adjourned meeting will have the same power as an original meeting. [Sec. 165(8)]

If any default is made in complying with the above provisions, every director or other officer of the company who is in default shall be liable to a fine which may extend to Rs. 500. Besides, if default is made in delivering the statutory report to the Registrar or in holding the statutory meeting, the Court may order the compulsory winding up of the company. [Sec. 433 (b)]

The obvious purpose of the statutory meeting with its preliminary report is to put the shareholders of the company as early as possible in possession of all the important facts relating to the new company what shares have been taken up, what moneys received, what contracts entered into, what sums spent on preliminary expenses, etc. Furnished with these particulars the shareholders are to have an opportunity of meeting and discussing the whole situation in the management methods and prospects of the company. If the shareholders fails to do so, they have only themselves to blame.