Natural Numbers: The group of numbers starting from 1 and including 1, 2, 3, 4, 5, and so on. Zero, negative numbers, and decimals are not included this group.Whole Numbers:

All Natural Numbers plus the number 0 are called as Whole Numbers.Integers: All Whole Numbers and their negatives are included in this group.Rational Numbers:Any number that can be expressed as a ratio of two integers is called a rational number.

These numbers have decimals that never terminate and never repeat with a pattern. 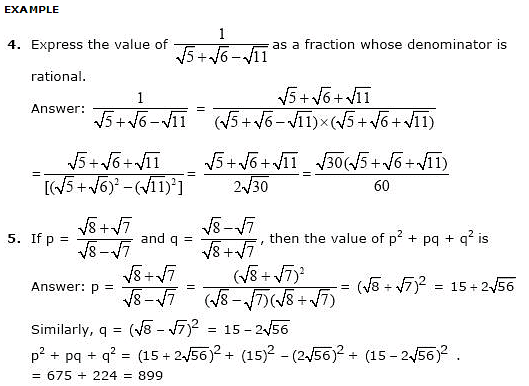 Real Numbers:This group is made up of all the Rational and Irrational Numbers. The ordinary number line encountered when studying algebra holds real numbers.Imaginary Numbers: An imaginary number is one of the form bi where b is a real number and i is the imaginary element derived from i2 = (-1). Imaginary numbers were defined to enable the solutions of equations requiring the square roots of negative numbers.

Note: A number in the form

is written in the form of a complex number by a+lb multiplying both numerator and denominator by the conjugate of a + ib, i.e. a - ib. Hence,

which is in the form p + iq

1 is not a prime number.