Type - 1To find out the position of the letter according to the given condition. 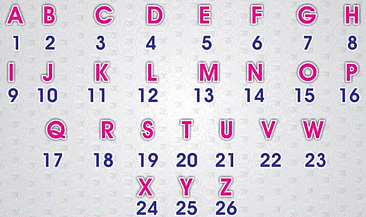 If the first half and second half of the alphabet series are Arranged in reverse order, then find out the answers to the given questions:

Q.2. Which letter is 5th to the left of the 12th letter from the left-hand side on the series?Ans. 5th to the left of 12th letter from left means, 12 – 5 = 7th letter of the serriesWhich falls in the first half of the series which starts from position 1st and ends on 13th.∴ 1 + 13 = 14, 14 – 7 = 7th letter i.e.“g” in the real series.(Position is same even in reversed series, because letter 7 is in the middle of the series, and its position will not be Changed even after letter get reversed)

To find out the next letter of the series.

Fill in the blank seriesThese types of series consist of small letters which follow a specific pattern or series. Some spaces are left blank in between the series given. We have to fill in the blanks from the given options to make a pattern.This can be clearly explained by the following examples:

In the exam one can also ask questions to make a meaningful word, or by arranging letters in ascending or descending order, or by getting the same gap in between two letters as in the alphabet series.This can be clearly explained by the following examples:

Example 1. If the letters of the word “ BEAUTIFUL” are arranged in Ascending/increasing order. How many letters are there whose position will not change?(a) 4(b) 3(c) 1(d) 2Ans. (c)Explanation.

As we can see only letter “U” is on the same position after rearrangement. Therefore, answer is option – (c).

Example 2. How many pairs are there in the word “BEAUTIFUL”, which have the same number of letters between them as in the alphabet series?(a) 1(b) 4(c) 3(d) noneAns. (b)Explanation.

Therefore, ans is option - (b)

These types of questions are just to check your General intelligence.