Part IV. Types of TM5 Two Way Infinite Turing MachinesThe TM we discussed so far had a tape that was finite on the left end and infinite on the right end.Two way infinite TM is an extension to this such that tape is infinite at both ends. This is shown below: 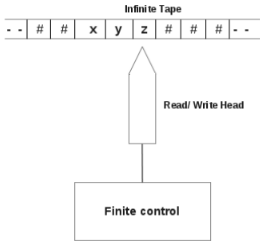 Thus on both sides of the tape, there is an infinite sequence of blank symbols (#).This model does not provide any additional computational capability.

6 Multitape Turing MachinesA multitape TM consists of multiple tapes. Each tape has a separate head.This is shown below: 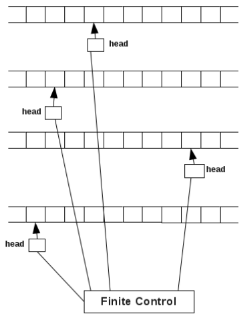 There are n tapes, each divided into cells. The first tape holds the input string. Initially, all the other tapes hold the blanksymbol, #.A head has three possible options:to move towards left (L),to move towards right (R), orto remain stationary (N).All the heads are connected to a finite control. Finite control is in a state at an instant.1. Initially, finite control is in state q0.2. Head in the lowermost tape points to the cell containing leftmost symbol of the input string.3. All the cells in the upper tapes contain # symbol.

When a transition occurs,1. Finite control may change its state.2. Head reads the symbol from the current cell and writes a symbol on it.3. Each head can move towards left (L), right (R) or stay stationary (N).

An example transition function for a 4 tape TM is given below:δ(q1, [a1, a2, a3, a4]) = (q2, [b1, b2, b3, b4], [L, R, R, N])Here the finite control is in state q1, It reads the symbol a1from the uppermost tape, a2from the next uppermost tape and so on.After reading, finite control changes its state to q2, and replaces the symbol a1by b1, a2by b2, a3by b3, a4by b4.After this head in the upper most tape turns left. Head in the 2nd tape turns right. Head in the 3rd tape turns right. Head in the 4th tape remains stationary.The advantage of using multi tape TM can be seen from the following example.Example:Consider the language L = {anbn|n ≥ 1}.In a normal TM, head has to move back and forth to match each pair of symbols a and b. On a multitape TM, no such movements are needed.This is done by making a copy of the input string in another tape. 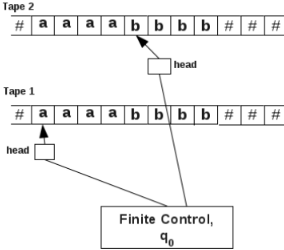