The document UNIT 3 : Consignment Summary CA CPT Notes | EduRev is a part of the CA CPT Course Principles and Practice of Accounting.
All you need of CA CPT at this link: CA CPT

TEST YOUR KNOWLEDGE:-Multiple Choice Questions:-Ques 1: P of Delhi sends out 1,000 boxes of toothpaste costing ₹200 each. Each box consist of 12 packets. 600 boxes were sold by consignee at ₹20 per packet. Amount of sale value will be:(a) ₹1,44,000(b) ₹1,20,000(c) ₹1,32,000Ans: (a)Ques 2: X of Kolkata sends out 2,000 boxes to Y of Delhi costing ₹100 each. Consignor’s expenses ₹5,000. 1/10th of the boxes were lost in consignee’s godown and treated as normal loss. 1,200 boxes were sold by consignee. The value of consignment Inventories will be:(a) ₹68,333(b) ₹61,500(c) ₹60,000Ans: (b)Ques 3: Which of the following statement is not true:(a) If del-credere commission is allowed, bad debt will not be recorded in the books of consignor(b) If del-credere commission is allowed, bad debt will be debited in consignment account(c) Del-credere commission is provided by consignor to consigneeAns: (b)Ques 4: X of Kolkata sent out 2,000 boxes costing 100 each with the instruction that sales are to be made at cost + 45%. X draws a bill on Y for an amount equivalent to 60% of sales value. The amount of bill will be:(a) ₹1,74,000(b) ₹2,00,000(c) ₹2,90,000Ans: (a)Ques 5: Which of the following statement is wrong:  (a) Consignor is the owner of the consignment Inventories(b) Del-credere commission is allowed by consignor to protect himself from bad debt(c) All proportionate consignee’s expenses will be added up for valuation of consignment Inventories.Ans: (c)Ques 6: Out of the following at which point the treatment of “Sales” and “Consignment” is same:(a) Ownership transfer.  (b) Money receive.(c) Inventories outflow.Ans: (c)Ques 7: If del-credere commission is allowed for bad debt, consignee will debit the bad debt amount to:  (a) Commission Earned A/c  (b) Consignor’s A/c(c) Trade receivables (Customers) A/cAns: (a)Ques 8: A proforma invoice is sent by:  (a) Consignee to Consignor(b) Consignor to Consignee(c) Customer/Debtors to ConsigneeAns: (b)Ques 9: Which of the following statement is correct:(a) Consignee will pass a journal entry in his books at the time of receiving goods from consignor.(b) Consignee will not pass any journal entry in his books at the time of receiving goods from consignor.(c) The ownership of goods will be transferred to consignee at the time of receiving the goods.Ans: (b)Ques 10: Consignment Inventories will be recorded in the balance sheet of consignor on asset side at:(a)  Invoice Value(b)  At Invoice value less Inventories reserve(c)  At lower than cost priceAns: (b)Ques 11: Which of the following expenses of consignee will be considered as non-selling expenses:
(a) Advertisement
(b) Insurance on freight inward
(c) Selling ExpensesAns: (b)

Ques 12: The consignment accounting is made on the following basis:
(a)  Accrual
(b) Realisation
(c) Cash Basi
Ans: (a)

Ques 2: Distinguish between:
(i) Consignment sale and Normal sale.
(ii)  Commission and Discount.
Ans: (i) In case of consignment, the property in the goods remains with the consignor until the goods are actually sold. The consignee acts only as a custodian of goods sent by consignor. In consignment, the ownership of goods does not pass on to the consignee in any case. In case of ordinary sale, the ownership of goods passes to the buyer immediately after sale. In case of consignment, the risk attached to the goods remain with the consignor even after sending the goods to the consignee. However, in case of ordinary sale, as soon as the property in the goods passes on to the buyers, the risk attached to the goods also passes at the same time. The relationship between consignor and consignee is that of principal and agent. In case of credit sale, the relationship between the buyer and the seller is that of a debtor and a creditor.
(ii) Commission may be defined as remuneration of an employee or agent relating to services performed in connection with sales, purchases, collections or other types of business transactions and is usually based on a percentage of the amounts involved.
Commission earned is accounted for as an income in the books of accounts, and commission allowed or paid is accounted for as an expense in the books of the party availing such facility or service.
The term discount refers to any reduction or rebate allowed and is used to express one of the following situations:
An allowance given for the settlement of a debt before it is due i.e. cash discount.
An allowance given to the whole sellers or bulk buyers on the list price or retail price, known as trade discount. A trade discount is not shown in the books of account separately and it is shown by way of deduction from cost of purchases.

Practical Questions:-
Ques 1: X of Delhi purchased 10,000 metres of cloth for ₹2,00,000 of which 5,000 metres were sent on consignment to Y of Agra at the selling price of ₹30 per metre. X paid ₹5,000 for freight and ₹500 for packing etc.
Y sold 4,000 metre at ₹40 per metre and incurred ₹2,000 for selling expenses. Y is entitled to a commission of 5% on total sales proceeds plus a further 20% on any surplus price realised over ₹30 per metre. 3,000 metres were sold at Delhi at ₹30 per metre less ₹3,000 for expenses and commission. Owing to fall in market price, the inventories of cloth in hand is to be reduced by 10%.
Prepare the Consignment Account and Trading and Profit & Loss Account in books of X.
Ans: 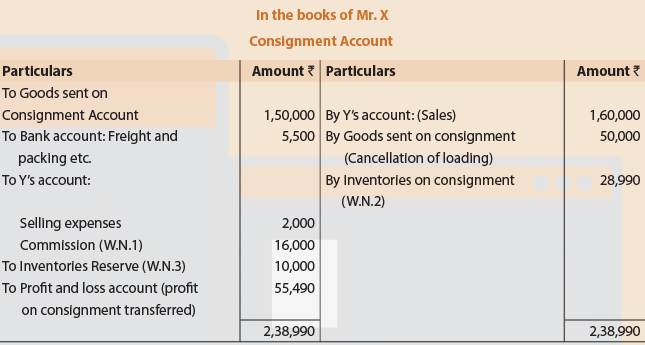 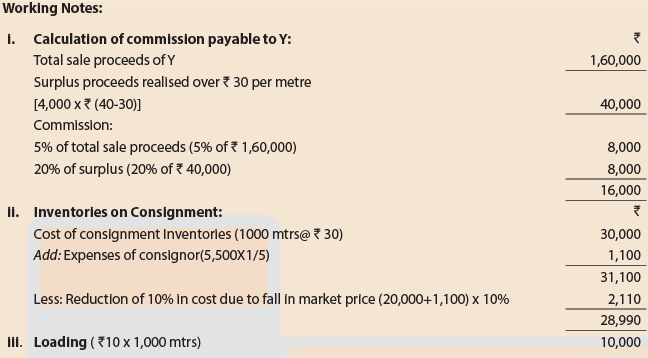 Ques 2: D of Delhi appointed A of Agra as its selling agent on the following terms:
Goods to be sold at invoice price or over.
A to be entitled to a commission of 7.5% on the invoice price and 20% of any surplus price realized over invoice price
The principals to draw on the agent a 30 days bill for 80% of the invoice price.
On 1st February, 2016, 1,000 cycles were consigned to A, each cycle costing ₹640 including freight and invoiced at ₹800.
Before 31st March, 2016, (when the principal’s books are closed) A met his acceptance on the due date; sold off 820 cycles at an average price of  ₹930 per cycle, the sale expenses being  ₹12,500; and remitted the amount due by means of Bank draft.
Twenty of the unsold cycles were shop-spoiled and were to be valued at a depreciation of 50% of cost.
Show by means of ledger accounts how these transactions would be recorded in the books of A and find out the value of closing inventory with A to be recorded in the books of D at cost.
Ans: 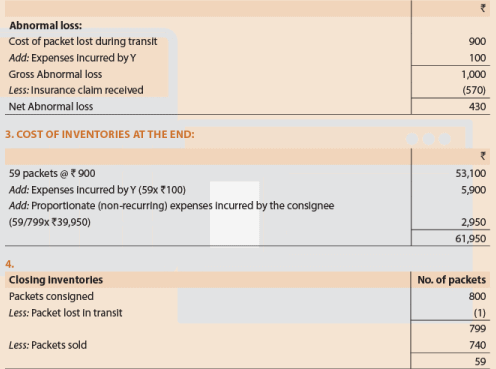 Ques 3: Mr. Y consigned 800 packets of toothpaste, each packet containing 100 toothpastes. Cost price of each packet was ₹900. Mr. Y Spent ₹100 per packet as cartage, freight, insurance and forwarding charges. One packet was lost on the way and Mr. Y lodged claim with the insurance company and could get ₹570 as claim on average basis. Consignee took delivery of the rest of the packets and spent ₹39,950 as other non-recurring expenses and ₹22,500 as recurring expenses. He sold 740 packets at the rate of ₹12 per toothpaste. He was entitled to 2% commission on sales plus 1% del-credere commission.  You are required to prepare Consignment Account. Calculate the cost of inventories at the end, abnormal loss and profit or loss on consignment.
Ans: 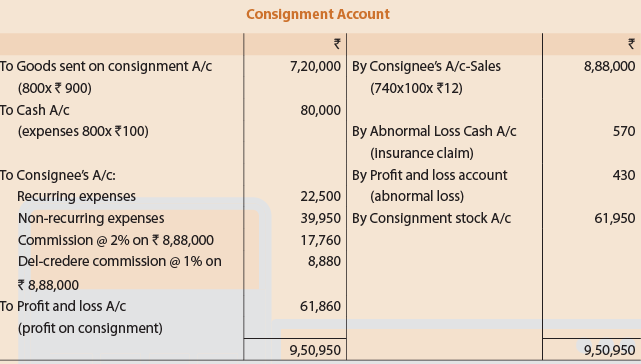 Ques 4: A of Agra sent on consignment goods valued ₹1,00,000 to B of Mumbai on 1st March, 2016. He incurred the expenditure of  ₹12,000 on freight and insurance. A’s accounting year closes on 31st December. B was entitled to a commission of 5% on gross sales plus a del-credere commission of 3%. B took delivery of the consignment by incurring expenses of  ₹3,000 for goods consigned.
On 31.12.2016, B informed on phone that he had sold all the goods for  ₹1,50,000 by incurring selling expenses of  ₹2,000. He further informed that only   ₹1,48,000 had been realized and rest was considered irrecoverable, and would be sending the cheque in a day or so for the amount  due along with the accounts sale.
On 5.1.2017, A received the cheque for the amount due from B and incurred bank charges of  ₹260 for collecting the cheque. The amount was credited by the bank on 9.1.2017.
Write up the consignment account finding out the profit/loss on the consignment, B’s account, Provision for expenses account and Bank account in the books of the consignor, recording the transactions upto the receipt and collection of the cheque.
Ans: 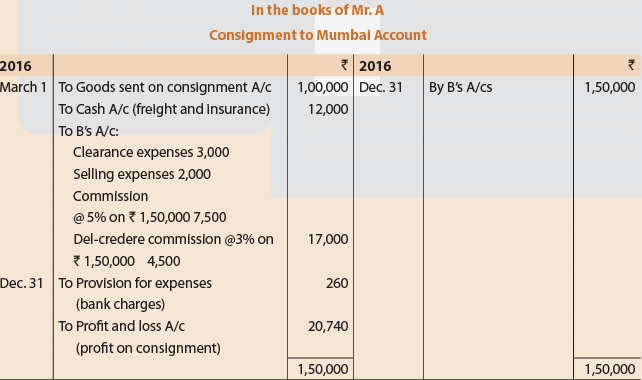 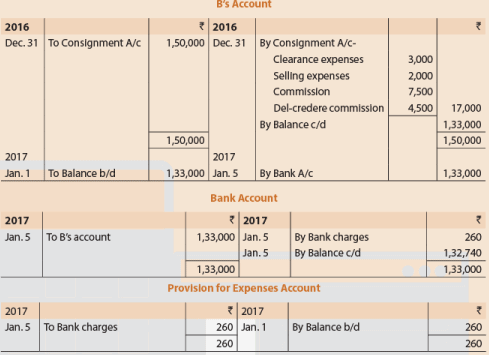