The document Doc: Ulothrix (Pond wool) NEET Notes | EduRev is a part of the NEET Course Biology Class 11.
All you need of NEET at this link: NEET

The majority of species of Ulothrix occurs in cold slow moving streams. 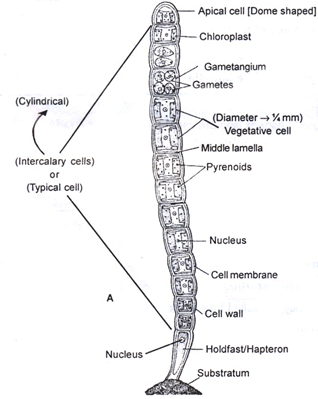 The thallus of Ulothrix is multicellular, filamentous, unbranched and bright green in colour.

Shape of the cells are cylindrical but they looks rectangular in external appearance.

The upper most or apical cell is somewhat dome-shaped and basal cell is elongated and narrow at the base.

The holdfast cell of the thallus is living and non-green. Chloroplast absent in hold fast.

A large vacuole is present in the centre of the cell. Surrounding the vacuole, the cytoplasm present as a thin layer and to form a primordial utricle. (2)  Macro zoospores : They are spindle or pear shaped with a pointed posterior end. Note : Above stage is identical to an another algae-Palmella, therefore it is known as Palmella stage. Note : In Ulothrix, colony formation occurs during palmella stage.

Fusion of motile gametes is a thought of luck.. When these gametes fail to fuse. They settle down, withdraw their flagella, round off and secretes a thick wall around itself. These are called as azygospores or parthenospores.

Sporophytic generation is represented only by the zygote. In the life cycle of Ulothrix, Zygote is very short in duration.

Gametes are formed in semi drying condition and released in the morning.

In Ulothrix primary division of labour is found. The work of the holdfast is to make the filament stable on the base. For food it depends on other cells, which does the work of food formation and reproduction.