Another device whose construction is similar to that of the FET is shown in the figure. 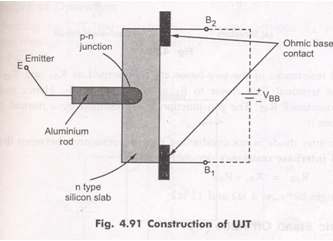 It is a three terminal device, having two layers.It consists of a slab of lightly doped N-type silicon material. The two base contacts are attached to both ends of this N-type surface. These are denoted as B1 and B2 respectively.

A P-type material is used to form a pn junction at the boundary of the aluminium rod and N-type slab. The N-type is lightly doped while P-type is heavily doped. That is N-type provides high resistivity and P-type provides low resistivity.

This device was originally described in the literature as the double-base diode, but is now commercially available under the designation Uni Junction transistor (UJT).

The standard symbol for this device is shown in the fig. 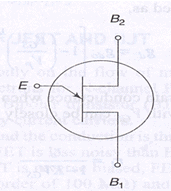 Here the emitter arrow is inclined and points toward B1 and This emitter arrow which is at an angle to the vertical line representing N-type material indicates the direction of flow of conventional current when UJT is forward biased.

The circuit of UJT is shown in the fig.

In the construction ,the emitter terminal is closer to B2 as compared to B1.

If we see the equivalent circuit of UJT, the internal resistances of the two bases are represented as Rb1 and Rb2. Hence Rb1 is greater than Rb2. The pn junction is represented by a normal diode with Vd  as the drop across it. When the emitter diode is not conducting then the resistance between the two bases B1 and B2 is called interbase resistance denoted by Rbb.

Its value ranges from 4kΩ to 12kΩ.

Consider UJT as shown in the fig. to which supply Vbb is connected. With Ie=0, That is emitter diode is not conducting ,

Then the voltage drop across Rb1  can be obtained by using potential divider rule: 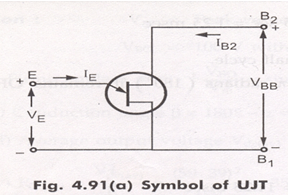 Replacing with its equivalent circuit 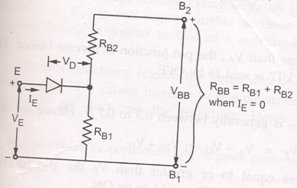 The value of η is from 0.5 to 0.8 the voltage Vrb1 is called intrinsic stand off voltage, because it keeps the emitter diode reverse biased for all emitter voltages less than Vrb1. 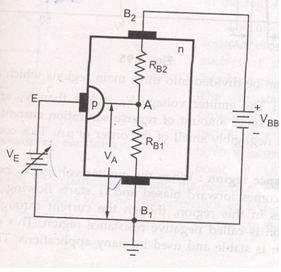 1.The supply Vbb is applied between B2 and B1 .

2. Variable emitter voltage Ve  is applied across the emitter terminals.

3. If Ve  is varied , potential of A is decided by η and is equal to ηVbb

As long as Ve < Va, the pn junction is reverse biased. Hence emitter current Ie will not flow. Thus, UJT is said to be off.

When Ve becomes equal to or greater than Vp, the pn junction becomes forward biased and current Ie flows. Thus, UJT  is said to be  ON.

1.The graph of IE against emitter voltage plotted for a particular value of Vbb is called the characteristics of UJT. 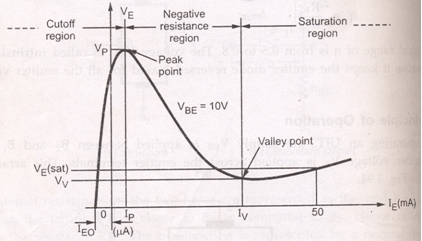 The characteristics can be divided in to three main regions.

1.cut off:   When Ve< Vp and the pn junction is reverse biased. A small amount of reverse saturation current IEO flows through the device which is negligibly small of the order of micro amps.  This condition remains till the peak point.

As Vbb increases, the potential Vp corresponding to peak point will increase.

The  UJT is mainly used in the triggering of other devices such as SCR. It is also used in the sawtooth wave generators and some timing circuits. The most popular application of UJT is as a relaxation oscillator to obtain short pulses for triggering of SCRs.

The relaxation oscillator using UJT which is meant for generating sawtooth waveform consists of a UJT and a capacitor, which is charged through emitter resistor as the supply voltage Vbb is switched ON.