The document Uniform Circular Motion and Simple Harmonic Motion Physics Notes | EduRev is a part of the Physics Course Basic Physics for IIT JAM.
All you need of Physics at this link: Physics

The horses on this merry-go-round exhibit uniform circular motion. shows the basic relationship between uniform circular motion and simple harmonic motion. The point P travels around the circle at constant angular velocity ω. The point P is analogous to an object on the merry-go-round. The projection of the position of P onto a fixed axis undergoes simple harmonic motion and is analogous to the shadow of the object. At the time shown in the figure, the projection has position x and moves to the left with velocity v. The velocity of the point P around the circle equals

and its projection, which is v. Note that these velocities form a similar triangle to the displacement triangle. To see that the projection undergoes simple harmonic motion, note that its position x is given byx = X cos θ,where θ = ωt,ω is the constant angular velocity, and X is the radius of the circular path. Thus,x = X cos ωtThe angular velocity ω is in radians per unit time; in this case 2π radians is the time for one revolution T. That is,ω = 2π/T. Substituting this expression for ω, we see that the position x is given by: 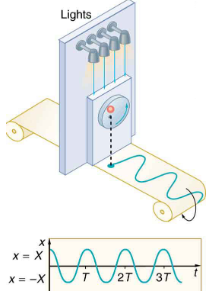 are similar right triangles. Taking ratios of similar sides, we see that

We can solve this equation for the speed v or

This expression for the speed of a simple harmonic oscillator is exactly the same as the equation obtained from conservation of energy considerations in Energy and the Simple Harmonic Oscillator.You can begin to see that it is possible to get all of the characteristics of simple harmonic motion from an analysis of the projection of uniform circular motion.Finally, let us consider the period T of the motion of the projection. This period is the time it takes the point P to complete one revolution. That time is the circumference of the circle 2π X divided by the velocity around the circle, vmax. Thus, the period T is.

We know from conservation of energy considerations that

Solving this equation for X/vmax gives.

Substituting this expression into the equation for T yields.

Section SummaryA projection of uniform circular motion undergoes simple harmonic oscillation.Problems & Exercises(a)What is the maximum velocity of an 85.0-kg person bouncing on a bathroom scale having a force constant of 1.50106 N/m, if the amplitude of the bounce is 0.200 cm? (b)What is the maximum energy stored in the spring?a). 0.266 m/sb). 3.00 JA novelty clock has a 0.0100-kg mass object bouncing on a spring that has a force constant of 1.25 N/m. What is the maximum velocity of the object if the object bounces 3.00 cm above and below its equilibrium position? (b) How many joules of kinetic energy does the object have at its maximum velocity?At what positions is the speed of a simple harmonic oscillator half its maximum? That is, what values of x/X give v = vmax/2,where X is the amplitude of the motion?√3/2A ladybug sits 12.0 cm from the center of a Beatles music album spinning at 33.33 rpm. What is the maximum velocity of its shadow on the wall behind the turntable, if illuminated parallel to the record by the parallel rays of the setting Sun?