The document Unit 2: Issue, Forfeiture and Re-Issue of Shares (Part - 2) CA CPT Notes | EduRev is a part of the CA CPT Course Principles and Practice of Accounting.
All you need of CA CPT at this link: CA CPT

According to Section 53 of the Companies Act, 2013, a Company cannot issue shares at a discount except in the case of issue of sweat equity shares (issued to employees and directors). Thus any issue of shares at discount shall be void.

When a company issues its securities at a price more than the face value, it is said to be an issue at a premium. Premium is the excess of issue price over face value of the security. It is quite common for the financially strong, and well-managed companies to issue their shares at a premium, i.e. at an amount more than the nominal or par value of shares. Thus, where a share of the nominal value of Rs 100 is issued at Rs 105, it is said to have been issued at a premium of 5 per cent.

When the issue is at a premium, the amount of premium may technically be called at any stage of share capital transactions. However, premium is generally called with the amount due on allotment, sometimes with the application of money and rarely with the call money.

When shares are issued at a premium, the premium amount is credited to a separate account called "Securities Premium Account" because it is not a part of share capital. Rather, it represents a gain of a capital nature to the company.

Note : If may be noted that certain class of Companies whose financial statements comply with the accounting standards as prescribed under Section 133 of the Companies Act, 2013, canRst apply the securities premium account for the purposes (b) and (d) mentioned above.

When shares are issued at a premium, the journal entries are as follows:

(b) Premium Amount called with Allotment

Pioneer Equipment Limited received on October 1, 2014 applications for 25,000 Equity Shares of Rs 100 each to be issued at a premium of 25 per cent payable at thus:

The shares were allotted by the Company on October 20, 2014 and the allotment money was duly received on October 31, 2014.

Record journal entries in the books of the company to record the transactions in connection with the issue of shares.

All the shares were applied for and allotted. A shareholder holding 200 shares paid the whole of the amount due along with allotment. Journalise the transactions, assuming all sums due were received. Interest was paid to the shareholder concerned on 1st February, 2014. 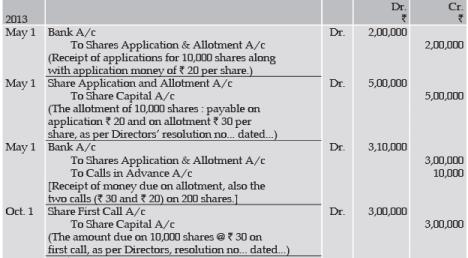 Thus shares can be issued either at face value or at premium or at discount. The following chart depicts the three categories as follows : 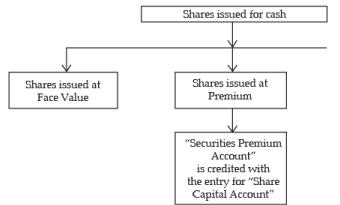 8. OVER SUBSCRIPTION AND PRO-RATA ALLOTMENT

Over subscription is the application money received for more than the number of shares offered to the public by a company. It usually occurs in the case of good issues and depends on many other factors like investors confidence in the company, general economic conditions, pricing of the issue etc. When the shares are oversubscribed, the company cannot satisfy all the applicants. It means that a decision is to be made on how the shares are going to be allotted. Shares can be allotted to the applicants by a company in any manner it thinks proper. The company may reject some applicants in full, i.e., no shares are allotted to some applicants and application money is refunded. Usually, multiple applications by the same persons are not considered. Allotment may be given to the rest of the applicants in full, i.e., for the number of shares they have applied for. A third alternative is that a company may allot shares to the applicants on pro-rata basis. RsPro-rata allotmentRs means allotment in proportion of shares applied for.

Under pro-rata allotment, the excess application money received is adjusted against the amount due on allotment or calls. Surplus money after making adjustment against future calls is returned to the applicants. The applicants are informed about the allotment procedure through an advertisement in leading newspapers.

(Being excess application money adjusted against allotment money as per BoardRss Resolution No....dated....)

You are required to record these transactions (including cash items) in the Journal of JHP Limited.

(1)  calculation for adjustment and refund