3.1 INTRODUCTIONIn the earlier units of this chapter, we have studied the issue of share capital as a means of raising funds for financing the business activities. But with increasing and ever growing needs of the corporate expansion and growth, equity source of financing is not suffcient. Hence corporates turn to debt financing through various means. Issuing debt instruments by offering the same for public subscription is one of the sources of financing the business activities. Debt financing does not only helps in reducing the cost of the capital but also helps in designing appropriate capital structure of the company. Debenture is one of the most commonly used debt instrument issued by the company to raise funds for the business.3.2 MEANINGThe most common method of supplementing the capital available to a company is to issue debentures which may either be simple or naked carrying no charge on assets, or mortgage debentures carrying either a fixed or a floating charge on some or all of the assets of the company.A debenture is a bond issued by a company under its seal, acknowledging a debt and containing provisions as regards repayment of the principal and interest. If a charge* has been created on any or on the entire assets of the company, the nature of the charge and the assets charged are described therein. Since the charge is not valid unless registered with the Registrar, and the certificate registering the charge is printed on the bond. It is also customary to create a trusteeship in favour of one or more persons in the case of mortgage debentures. The trustees of debenture holders have all powers of a mortgage of a property and can act in whatever way they think necessary to safeguard the interest of debenture holders.Section 2 (30) of the Companies Act, 2013 defines debentures as “Debenture” includes debenture stock, bonds or any other instrument of a company evidencing a debt, whether constituting a charge on the assets of the company or not.

Note: No company shall issue any debentures carrying any voting rights.3.3 FEATURES OF DEBENTURES1. It is a document which evidences a loan made to a company.2. It is a fixed interest-bearing security where interest falls due on specific dates.3. Interest is payable at a predetermined fixed rate, regardless of the level of profit.4. The original sum is repaid at a specified future date or it is converted into shares or other debentures.5. It may or may not create a charge on the assets of a company as security.6. It can generally be bought or sold through the stock exchange at a price above or below its face value.3.4 DISTINCTION BETWEEN DEBENTURES AND SHARES

ILLUSTRATION 1Amol Ltd. issued 40,00,000, 9% debentures of ₹50 each, payable on application as per term mentioned in the prospectus and redeemable at par any time after 3 years from the date of issue. Record necessary entries for issue of debentures in the books of Amol Ltd.SOLUTION

2. Debentures issued at Discount and Redeemable at par or at discount: When debentures are issued at discount, issue price will be less than par value. The difference between the two is considered as loss on issue on debentures and is to be written-off over the life of debentures. The entries with regards to issue are given below:

ILLUSTRATION 2Atul Ltd. issued 1,00,00,000, 8% debenture of ₹100 each at a discount of 10% redeemable at par at the end of 10th year. Money was payable as follows:₹30 on application₹60 on allotmentRecord necessary journal entries regarding issue of debenture.SOLUTION 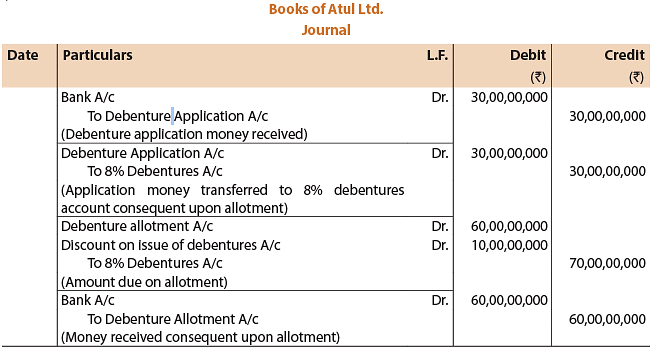 3. Debentures Issued at Premium and Redeemable at par or at discount When debenture are issued at premium, the issue price is more than the par value. The premium is transferred to securities premium account. In this regard, the following journal entries are recorded:When premium amount is received at the time of application;

When debentures are issued at par or premium value but redeemed at discount, then it means that the company will gain by paying less. This gain will not be recognised in the books at the time of issue of debentures as per the conservatism concept.ILLUSTRATION 3Koinal Chemicals Ltd. issued 15,00,000, 10% debenture of ₹50 each at premium of 10%, payable as ₹20 on application and balance on allotment. Debentures are redeemable at par after 6 years. All the money due on allotment was called up and received. Record necessary entries when premium money is included in application moneySOLUTION 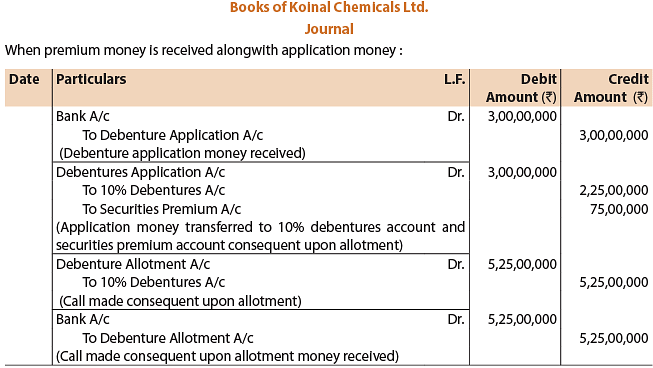 4. Debentures issued at par and redeemable at a premiumWhere debentures are to be redeemed at premium, an extra entry is to be made at the time of issue and allotment of debentures. This extra entry is to be passed for providing premium payable on redemption. Debenture Redemption Premium Account is a personal account which represents a liability of the company in respect of premium payable on  redemption.In this case, the issue price is same as par value but the redemption value is more than the par value, therefore redemption premium is recorded as a loss on issue of debentures at the time of allotment of debentures. Following journal entries are recorded in this regard: 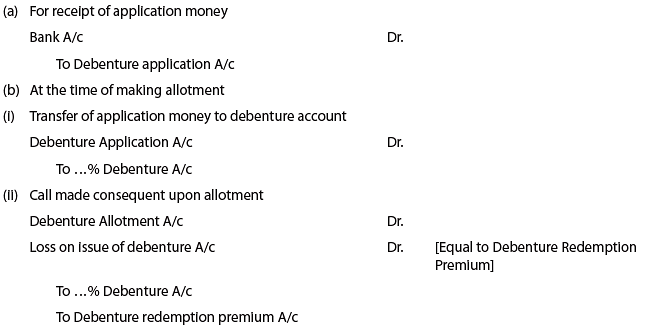 ILLUSTRATION 4Modern Equipments Ltd. issued 4,00,000, 12% debentures of ₹ 100 payable as follows:On application ₹30On allotment ₹70The debenture were fully subscribed and all the money was duly received. As per the terms of issue, debentures are redeemable at ₹110 per debenture. Record necessary entries regarding issue of debentures.SOLUTION 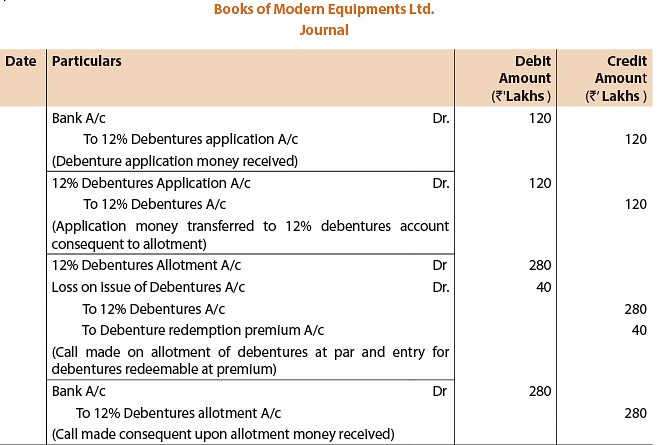 5. Debentures Issued at discount and redeemable at premiumIn this situation the issue price is less than par value but redemption value is more than par value. The difference between the redemption price and the issue price is treated as discount/loss on issue of debentures. Suppose, a 10% debentures of ₹1,000 is issued at a discount of ₹100 and redeemable at a premium of `5 per debenture, the amount of loss will be equal to ₹1,005 – ₹900 = ₹105. This is to be treated as loss on issue. It is to be noted that premium on redemption of debentures is also credited by ₹5.

ILLUSTRATION 5Agrotech Ltd. issued 150 lakh 9% debentures of ₹100 each at a discount of 6%, redeemable at a premium of 5% after 3 years payable as : ₹50 on application and ₹44 on allotment. Record necessary journal entries for issue of debentures.SOLUTION 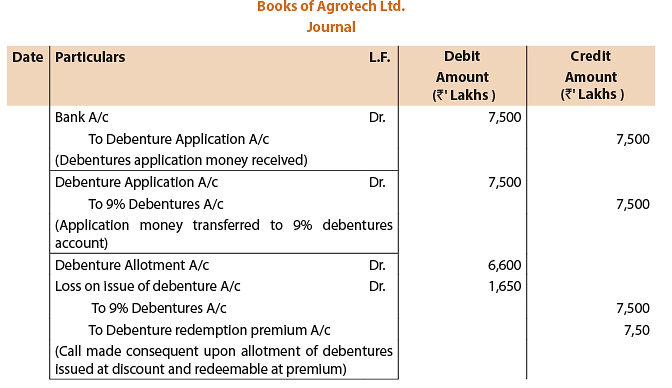 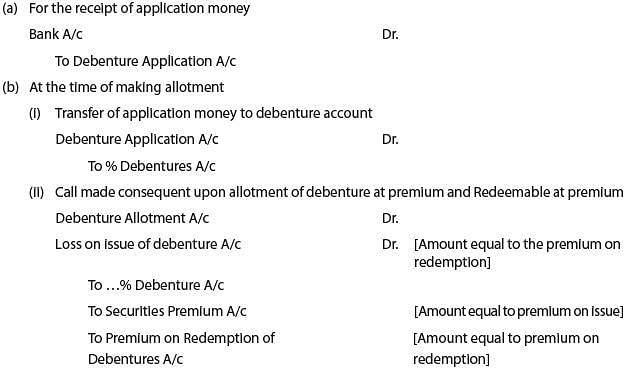 The accounting entries would be as follows: 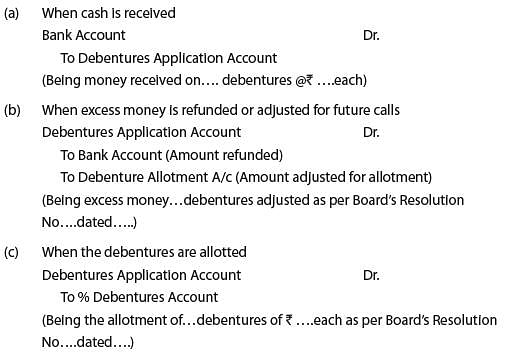 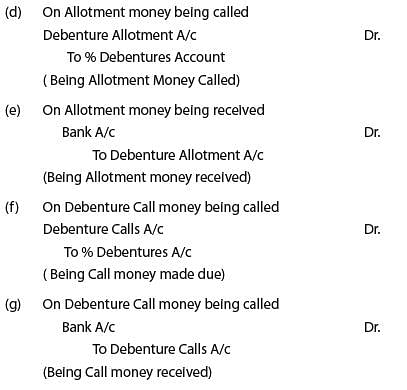 ILLUSTRATION 6Simmons Ltd. issued 1,00,000, 12% Debentures of ₹100 each at par payable in full on application by 1st April, Application were received for 1,10,000 Debentures. Debentures were allotted on 7th April. Excess money refunded on the same date.You are required to pass necessary Journal Entries (including cash transactions) in the books of the company.SOLUTION

The premium on debentures is credited to ‘Securities Premium Account’ as ‘Debentures’ are covered in the definition of ‘securities’ specified in the clause (h) of section 2 of the Securities Contracts (Regulation) Act. Therefore, restriction of utilization of debentures (securities) premium will also be governed by Section 52 of the Companies Act, 2013.

The accounting entries would be as follows: 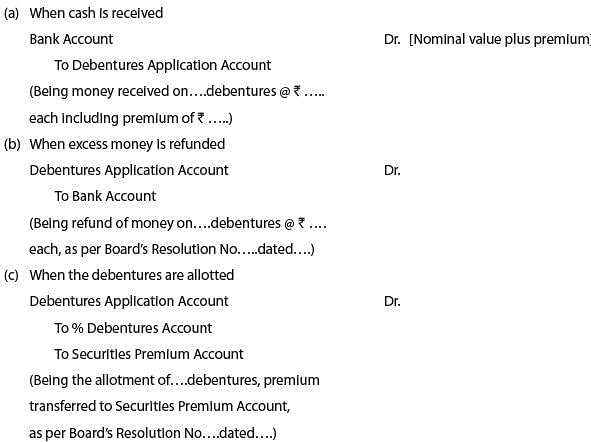 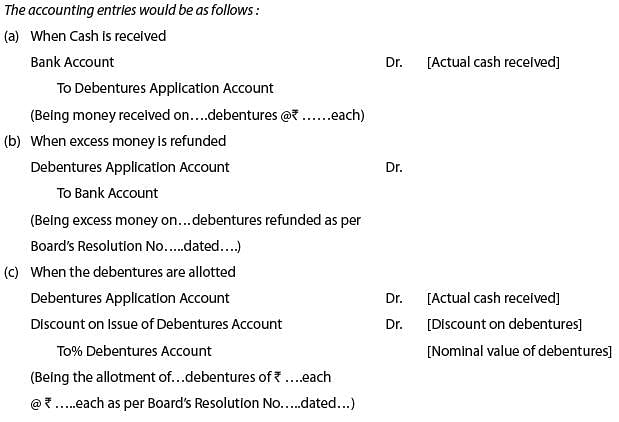 In fact, the discount on issue of debentures is considered as incremental interest expense. The true expense (net borrowing cost) for a particular accounting period is, therefore, the total interest payment plus the discount written off.

ILLUSTRATION 7X Ltd. issued 1,00,000 12% Debentures of ₹100 each at a discount of 10% payable in full on application by 31st May, 2017. Applications were received for 1,20,000 debentures. Debentures were allotted on 9th June, 2017. Excess monies were refunded on the same date. Pass necessary Journal Entries. Also show necessary ledger accounts.SOLUTION 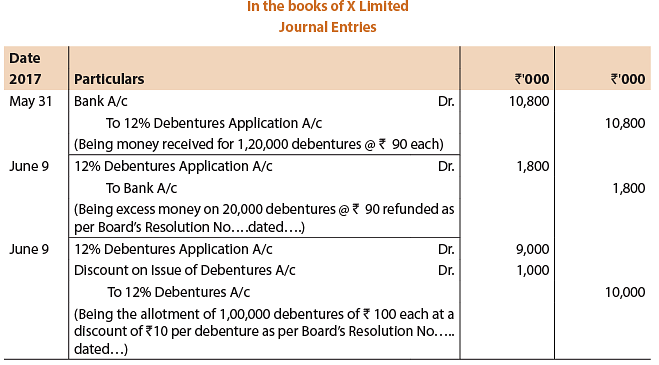 3.7 ISSUE OF DEBENTURES AS COLLATERAL SECURITY Collateral security means secondary or supporting security for a loan, which can be realised by the lender in the event of the original loan not being repaid on the due date. Under this arrangement, the borrower agrees that a particular asset or a group of assets will be realized and the proceeds there from will be applied to repay the loan in the event that the amount due, cannot be paid.Sometimes companies issue their own debentures as collateral security for a loan or a fluctuating overdraft. When the loan is repaid on the due date, these debentures are at once released with the main security. In case, the company cannot repay its loan and the interest thereon on the due date, the lender becomes the debenture holder who can exercise all the rights of a debenture holder.

The holder of such debentures is entitled to interest only on the amount of loan, but not on the debentures.

Accounting EntriesThere are two methods of showing these types of debentures in the accounts of a company.Method 1Under this method, no entry is made in the books of account of the company at the time of making issue of such debentures. In the ‘Notes to Accounts’ of Balance Sheet, the fact of the debentures being issued and outstanding is shown by a note under the liability secured.ILLUSTRATION 8X Ltd. obtains a loan from IDBI of  ₹1,00,00,000, giving as collateral security of  ₹1,50,00,000 (of ₹ 10 each), 14%, First Mortgage Debentures.SOLUTIONIn the Notes to Accounts of Balance Sheet of X Ltd., it is shown as follows:

Under this method, the following entry is made to record the issue of such debentures:

The Debentures Suspense Account will appear on the assets side of the Balance Sheet under Other Non- Current Assets and Debentures on the liabilities side of the Balance Sheet. When the loan is repaid, the entry is reversed in order to cancel it.ILLUSTRATION 9Taking the same information of the illustration 8, the entry on issue will be as follows: 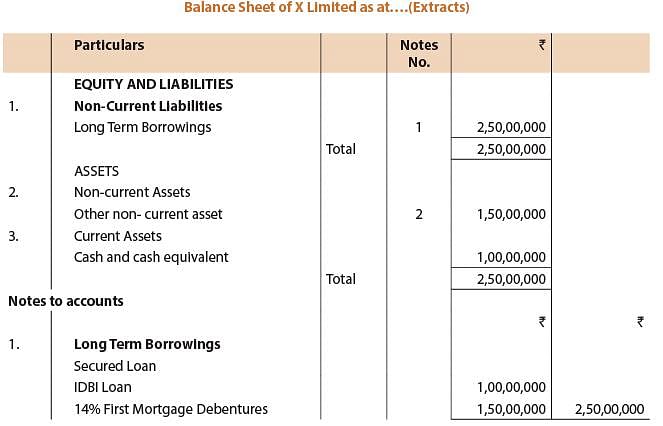 Students should note that the Method 1 is much more logical from the accounting point of view. Therefore, it is advised to follow Method 1.

3.8 ISSUE OF DEBENTURES IN CONSIDERATION OTHER THAN FOR CASHJust like shares, debentures can also be issued for consideration other than for cash, such as for purchase of land, machinery, etc. In this case, the following entries are passed:

Further it should be noted that these debentures can be issued at par, premium and at discount. In each case the second entry for issue of debentures would be done accordingly. Number of debentures to be issued is calculated as follows:- 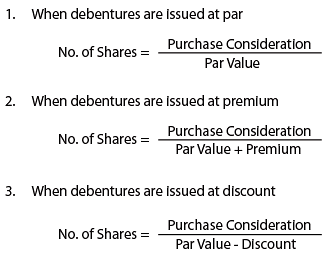 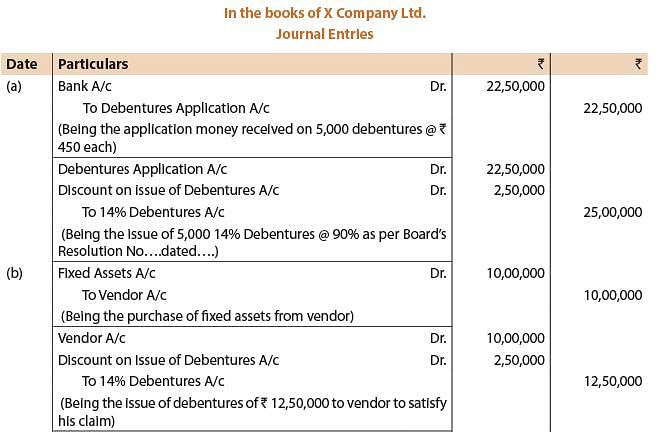 Note: No entry is made in the books of account of the company at the time of making issue of such debentures. In the Balance Sheet the fact that the debentures being issued as collateral security and outstanding are shown under the respective liability.

Loss on issue of debentures is also a capital loss and should be written off in a similar manner as discount on debentures issued. In the balance sheet both the items (Discount and Loss) are shown as Non-current/ current assets depending upon the period for which it has to be written off.ILLUSTRATION 11HDC Ltd issues 1,00,000, 12% Debentures of ₹100 each at ₹94 on 1st January, 2017. Under the terms of issue, the debentures are redeemable at the end of 5 years from the date of the issue. Calculate the amount of discount to be written-off in each of the 5 years.SOLUTION

3.10 INTEREST ON DEBENTURES Interest payable on coupon debenture is treated as a charge against the profits of the company. Interest on debenture is paid periodically and is calculated at coupon rate on the nominal value of debentures. The company will pay interest net of tax to the debenture holders because the company is under obligation to deduct tax at source at the rates applicable under tax rules from time to time. The companies will deposit the tax so deducted with income tax authorities. Following accounting entries are to be recorded in this regard: 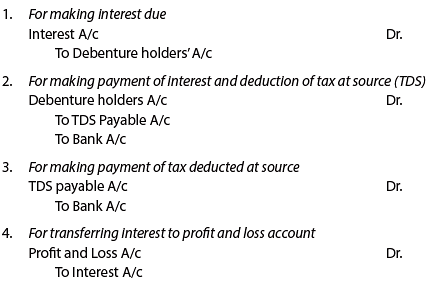 ILLUSTRATION 13A company issued 12% debentures of the face value of ₹10,00,000 at 10% discount on 1-1-2017. Debenture interest after deducting tax at source @ 10% was payable on 30th June and 31st of December every year. All the debentures were to be redeemed after the expiry of five year period at 5% premium.Pass journal entries for the accounting year 2017.SOLUTION 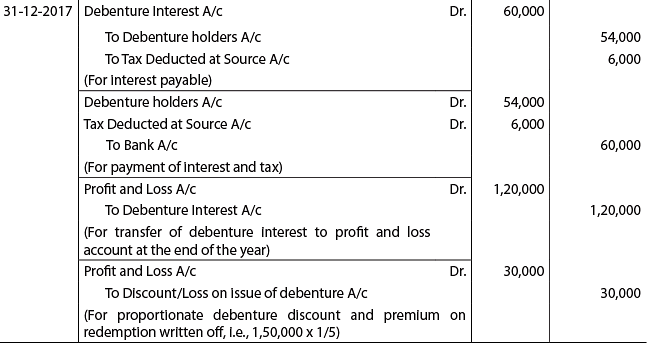