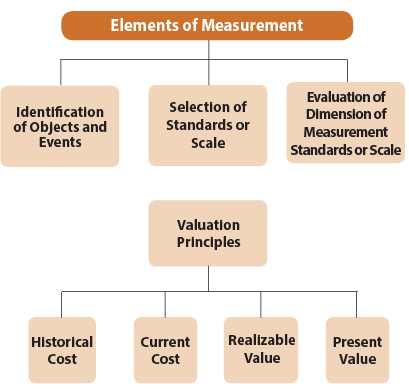 We have earlier defined Accounting as the process of identifying, measuring and communicating economic information to permit informed judgements and decisions by the users of the information. So accounting essentially includes measurement of ‘information’. Decision makers need past, present and future information. For external users, generally the past information is communicated.There is no uniform set of events and transactions in accounting which are required for decision making. For example, in cash management, various cash receipts and expenses are the necessary objects and events. Obviously, the decision makers need past cash receipts and expenses data along with projected receipts and expenses. For giving loan to a business one needs information regarding the repayment ability (popularly called debt servicing) of principal and interest. This also includes past information, current state of aairs as well as future projections. It may be mentioned that past and present objects and events can be measured with some degree of accuracy but future events and objects are only predicted, not measured. Prediction is an essential part of accounting information. Decision makers have to take decisions about the unseen future for which they need suitable information.7.3 Standard or Scale Of MeasurementIn accounting, money is the scale of measurement (see money measurement concept), although now-adays quantitative information is also communicated along with monetary information. Money as a measurement scale has no universal denomination. It takes the shape of currency ruling in a country. For example, in India the scale of measurement is Rupee, in the U.K. Pound-Sterling (£), in Germany Deutschmark (DM), in the United States Dollar ($) and so on. Also there is no constant exchange relationship among the currencies. If one businessman in India took loan $5,000 from a businessman of the U.S.A., he would enter the transaction in his books in terms of Rs Suppose at the time of loan agreement exchange rate was US $ = Rs 50. Then loan amounted to Rs 2,50,000. Afterwards the exchange rate has been changed to $ 1 = Rs 55. At the changed exchange rate the loan amount becomesRs 2,75,000. So money as a unit of measurement lacks universal applicability across the boundary of a country unless a common currency is in vogue. Since the rate of exchange fluctuates between two currencies over the time, money as a measurement scale also becomes volatile.

7.4 Dimension of Measurement Scale
An ideal measurement scale should be stable over time. For example, if one buys 1 kg. cabbage today, the quantity he receives will be the same if he will buy 1 kg. cabbage one year later. Similarly the length of 1 metre cloth will not change if it is bought a few days later. That is to say a measurement scale should be stable in dimension. Money as a scale of measurement is not stable. There occurs continuous change in the input output prices. The same quantity of money may not have the ability to buy same quantity of identical goods at different dates. Thus information of one year measured in money terms may not be comparable with that of another year. Suppose production and sales of a company in two different years are as follows:

Looking at the monetary figures one may be glad for 8% sales growth. In fact there was 10% production and sales decline. The growth envisaged through monetary figures is only due to price change. Let us suppose further that the cost of production for the above mentioned two years is as follows:

Take Gross profit = Sales – Cost of Production. Then in the first year profit was Rs 1,00,000 while in the second year the profit was Rs 90,000. There was 10% decline in
gross profit.
So money as a unit of measurement is not stable in the dimension.
Thus Accounting measures information mostly in money terms which is not a stable scale having universal applicability and also not stable in dimension for comparison over the time. So it is not an exact measurement discipline.

7.5 Accounting as A Measurement Discipline
How do you measure a transaction or an event? Unless the measurement base is settled we cannot progress to the record keeping function of book-keeping. It has been explained that accounting is meant for generating information suitable for users’ judgments and decisions. But generation of such information is preceded by recording, classifying and summarising data. By that process it measures performance of the business entity by way of profit or loss and shows its financial position. Thus measurement is an important part of accounting discipline. But a set of theorems governs the whole measurement subsystem. These theorems should be carefully understood to know how the cogs of the ‘accounting-wheel’ work. Now-a-days accounting profession earmarked three theorems namely going concern, consistency and accrual as fundamental accounting assumptions, i.e. these assumptions are taken for granted. Also while measuring, classifying, summarising and also presenting, various policies are adopted. Recording, classifying summarising and communication of information are also important part of accounting, which do not fall within the purview of measurement discipline. Therefore we cannot simply say that accounting is a measurement discipline. But in accounting money is the unit of measurement. So, let us take one thing for granted that all transactions and events are to be recorded in terms of money only. Quantitative information is also required in many cases but such information is only supplementary to monetary information.

P = Principal
i = interest / 100
n = Time
This equation gives the relationship between present money, principal and the future money amount. If A, i and n are given, to find out P, the equation is to be changed slightly. 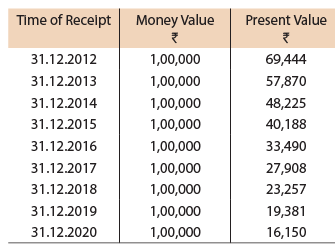 Total of all these present values is Rs 4,19,246. Since the machine purchased by Mr. X will produce cash equivalent to Rs 4,19,246 in terms of present value, it is to be valued at such amount as per present value measurement basis. Here, Mr. X will receive Rs 1,00,000 at different points of time-these are cash inflows. In the other example, he has to pay interest and principal of bank loan-these are cash outflows.
Perhaps you also know the annuity rule:
Present value of an Annuity or Re. A for n periods is
A = Annuity
i = interest

Similarly, the present value of bank loan is

7.7 Measurement and Valuation
Value relates to the benefits to be derived from objects, abilities or ideas. To the economist, value is the utility (i.e.; satisfaction) of an economic resource to the person contemplating or enjoying its use. In accounting, to mean value of an object, abilities or ideas, a monetary surrogate is used. That is to say, value is measured in terms of money. Suppose, an individual purchased a car paying Rs 2,50,000. Its value lies in the satisfaction to be derived by that individual using the car in future. Economists often use ordinal scale to indicate the level of satisfaction. But accountants use only cardinal scales. If the value of car is taken as Rs 2,50,000 it is only one type of value called acquisition cost or historical cost. So value is indicated by measurement. In accounting the value is always measured in terms of money.

Earlier in this unit we have learned how to measure a transaction, which had already taken place and for which either some value/money has been paid or some valuation principles are to be adopted for their measurement. But there are certain items, which havenot occurred therefore cannot be measured using valuation principles still they are necessary to record in the books of account, for example, provision for doubtful debts. For such items, we need some value. In such a situation reasonable estimates based on the existing situation and past experiences are made. The measurement of certain assets and liabilities is based on estimates of uncertain future events. As a result of the uncertainties inherent in business activities, many financial statement items cannot be measured with precision but can only be estimated. Therefore, the management makes various estimates and assumptions of assets, liabilities, incomes and expenses as on the date of preparation of financial statements. Such estimates are made in connection with the computation of depreciation, amortisation and impairment losses as well as, accruals, provisions and employee benefit obligations. Also estimates may be required in determining the bad debts, useful life and residual value of an item of plant and machinery and inventory obsolescence. The process of estimation involves judgements based on the latest information available. An estimate may require revision if changes occur regarding circumstances on which the estimate was based, or as a result of new information, more experience or subsequent developments. Change in accounting estimate means dierence arises between certain parameters estimated earlier and re-estimated during the current period or actual result achieved during the current period.
Few examples of situations wherein accounting estimates are needed can be given as follows:
(1) A company incurs expenditure of Rs 10,00,000 on development of patent. Now the company has to estimate that for how many years the patent would benefit the company. This estimation should be based on the latest information and logical judgement.
(2) A company dealing in long-term construction contracts, uses percentage of completion method for recognizing the revenue at the end of the accounting year. Under this method the company has to make adequate provisions for unseen contingencies, which can take place while executing the remaining portion of the contract. Since provisioning for unseen contingencies requires estimation, there may be excess or short provisioning, which is to be adjusted in the period when it is recognised.

(3)  Company has to provide for taxes which is also based on estimation as there can be some interpretational differences on account of which tax authorities may either accept the expenditure or refuse it. This will ultimately lead to different tax liability.