The quantites which can be measured by an instrument and by means of which we can describe the laws of physics are called physical quantities.

(i) All other quantites may be expressed in terms of fundamental quantities.

(ii) They are independent of each other and cannot be obtained from one another.

Note : These are also called as absolute or base quantities.

In mechanics, we treat length, mass and time as the three basic or fundamental quantities.

1.2 Derived : Physical quantities which can be expressed as combination of base quantities are called as derived quantities.

Note : The supplementary quantities have only units but no dimensions.

Ex.2 Length of a metal rod bar is unchanged whether it is measured as 2 metre or 200 cm.

Observe the change in the Numerical value (from 2 to 200) as unit is changed from metre to cm.

Measurement of any physical quantity is expressed in terms of an internationally accepted certain basic reference standard called unit.

A complete set of units, both fundamental and derived is called a system of unit.

There are various system in use over the world : CGS, FPS, SI (MKS) etc

Table 1 : Units of some physical quantities in different systems.

3.3 Definitions of some important SI Units

(iv) Ampere : It is the current which when flows through two infinitely long straight conductors of negligible cross-section placed at a distance of one metre in vacuum produces a force of 2 × 10-7 N/m between them.

(vi) Mole : It is the amount of substance of a system which contains as many elementary particles (atoms, molecules, ions etc.) as there are atoms in 12g of carbon - 12.

(vii) Candela : It is luminous intensity in a perpendicular direction of a surface of

(viii) Radian : It is the plane angle between two radiia of a circle which cut-off on the circumference, an arc equal in length to the radius.

(ix) Steradian : The steradian is the solid angle which having its vertex at the centre of the sphere, cut-off an area of the surface of sphere equal to that of a square with sides of length equal to the radius of the sphere.

The magnitudes of physical quantities vary order a wide range. The CGPM recommended standard prefixes for magnitude too large or too small to be expressed more compactly for certain power of 10.

5. General Guidelines for using Symbols for SI Units,  Some other Units, and SI prefixes

(a) Symbols for units of physical quantities are printed/written in Roman (upright type), and not in italics

For example : 1 N is correct but 1 N is incorrect

(b) (i) Unit is never written with capital initial letter even if it is named after a scientist.

(ii) For a unit named after a scientist, the symbol is a capital letter.

But for other units, the symbol is NOT a capital letter.

Note : The single exception is L, for the unit litre.

(c) Symbols for units do not contain any final full stop all the end of recommended letter and remain unaltered in the plural, using only singular form of the unit.

(d) Use of solidus ( / ) is recommended only for indicating a division of one letter unit symbol by another unit symbol. Not more than one solidus is used.

(e) Prefix symbols are printed in roman (upright) type without spacing between the prefix symbol and the unit symbol. Thus certain approved prefixes written very close to the unit symbol are used to indicate decimal fractions or multiples of a SI unit, when it is inconveniently small or large. 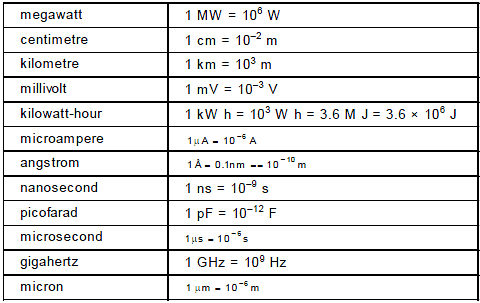 The unit 'fermi', equal to a femtometre or 10-15 m has been used as the convenient length unit in nuclear studies.

(f) When a prefix is placed before the symbol of a unit, the combination of prefix and symbol is considered as a new symbol, for the unit, which can be raised to a positive or negative power without using brackets. These can be combined with other unit symbols to form compound unit.

(g) A prefix is never used alone. It is always attached to a unit symbol and written or fixed before the unit symbol.

(h) Prefix symbol is written very close to the unit symbol without spacing between them, while unit symbols are written separately with spacing with units are multiplied together.

(i) The use of double profixes is avoided when single prefixes are available.

(j) The use of a combination of unit and the symbols for unit is avoided when the physical quantity is expressed by combining two or more units.

5.1. Characteristics of base units or standards :

(A) Well defined (B) Accessibility (C) Invariability (D) Convenience in use

For convenience, the fundamental quantities are represented by one letter symbols. Generally mass is denoted by M, length by L, time by T and electric current by A.

The thermodynamic temperature, the amount of substance and the luminous intensity are denoted by the symbols of their units K, mol and cd respectively. The physical quantity that is expressed in terms of the base quantities is enclosed in square brackets.θ

It is an expression which shows how and which of the fundalmental units are required to represent the unit of physical quantity. 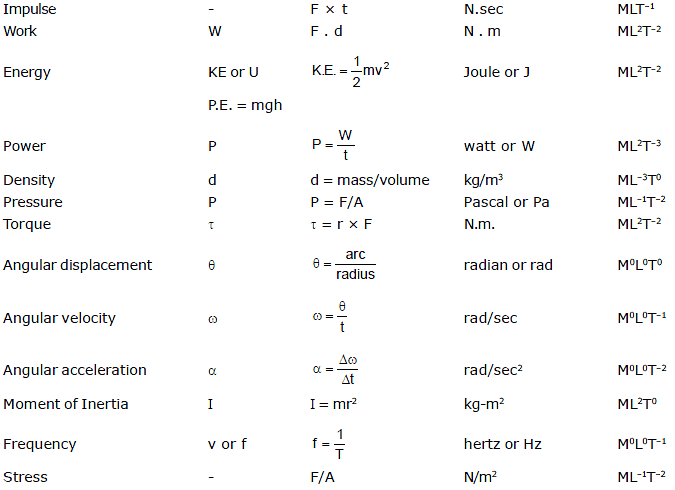 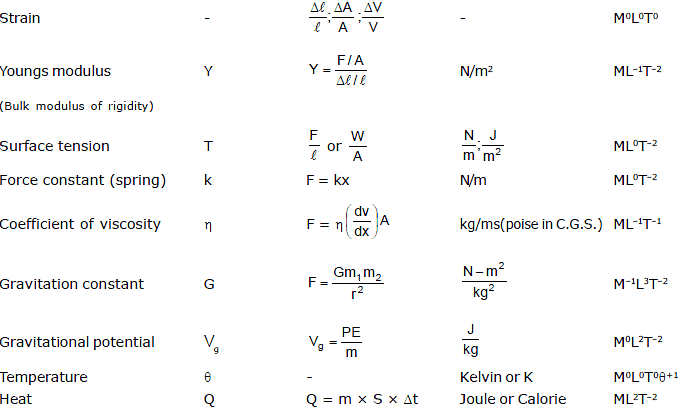 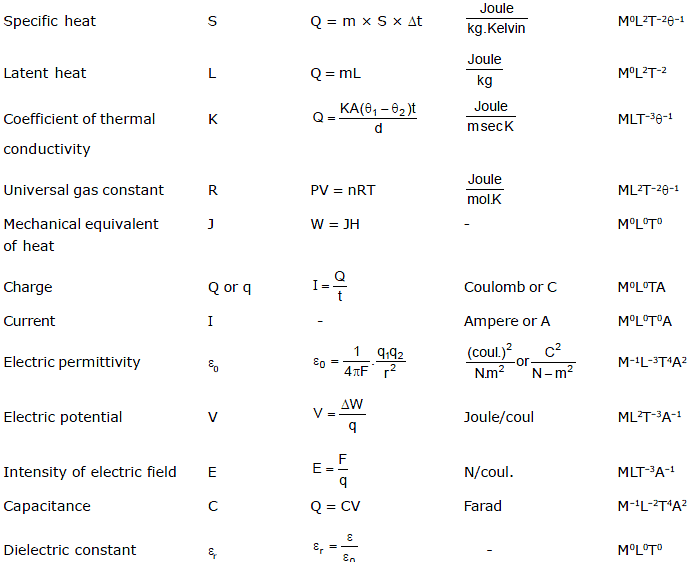 This is based on the fact that the product of the numerical value (n) and its corresponding unit (u) is a constant, i.e.,

Suppose the dimensions of a physical quantity are a in mass, b in length and c in time. If the fundamental units in one system are M1, L1 and T1 and in the other system are M2, L2 and T2 respectively. Then we can write.

8.2 To check the dimensional correctness of a given physical equation :

Every physical equation should be dimensionally balanced. This is called the 'Principle of Homogeneity'. The dimensions of each term on both sides of an equation must be the same. On this basis we can judge whether a given equation is correct or not. But a dimensionally correct equation may or may not be physically correct.

As in the above equation, the dimensions of both sides are same. The given formula is dimensionally correct.

8.3 Principle of Homogeneity of Dimensions.

the dimensions of s, ut and

at2 all are same.

Ex.6 The velocity v of a particle depends upon the time t according to the equation

From principle of homogeneity 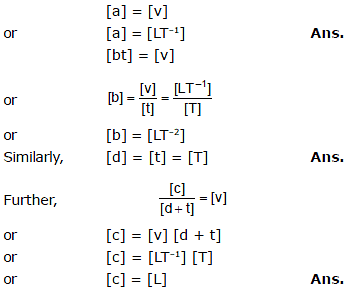 8.4 To establish the relation among various physical quantities :

If we know the factors on which a given physical quantity may depend, we can find a formula relating the quantity with those factors. Let us take an example.

Ex.7 The frequency (f) of a stretched string depends upon the tension F (dimensions of force), length l of the string and the mass per unit length m of string. Derive the formula for frequency. 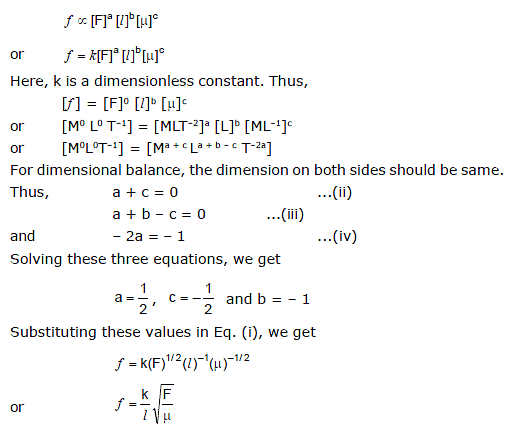 The method of dimensions has the following limitations :

(i) By this method the value of dimensionless constant can not be calculated.

(ii) By this method the equation containing trigonometrical, exponential and logarithmic terms cannot be analysed.

(iii) If a physical quantity depends on more than three factors, then relation among them cannot be established because we can have only three equations by equalising the powers of M, L and T. 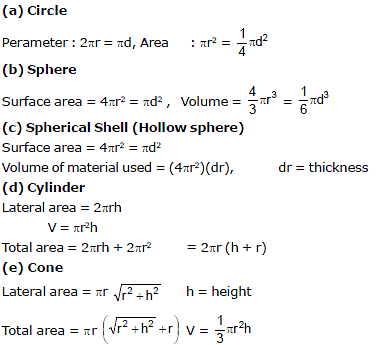 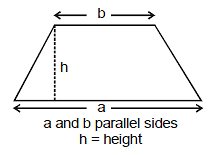 (i) Measurement of angle & relationship between degrees & radian

In navigation and astronomy, angles are measured in degrees, but in calculus it is best to use units called radians because of they simplify later calculations.

Let ACB be a central angle in circle of radius r, as in figure.

Then the angle ACB or q is defined in radius as -

The radian measure for a circle of unit radius of angle ABC is defined to be the length of the circular arc AB. since the circumference of the cirlce is 2π and one complete revolution of a circle is 360°, the relation between radians and degrees is given by the following equation. 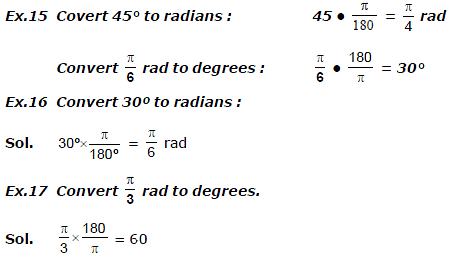 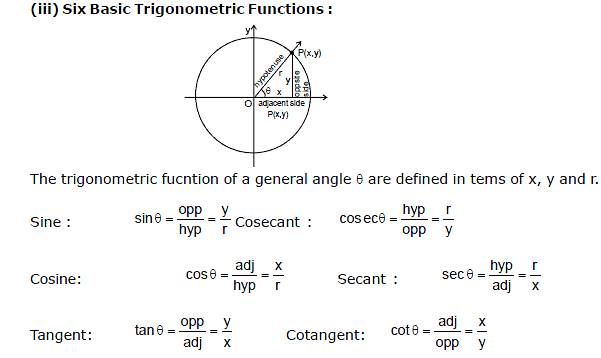 If the circle in (Fig. above) has radius r = 1, the equations defining sinθ and cosθ become

We can then calculate the values of the cosine and sine directly from the coordinates of P.

12. Values of sinθ, cosθ and tanθ for some standard angles. 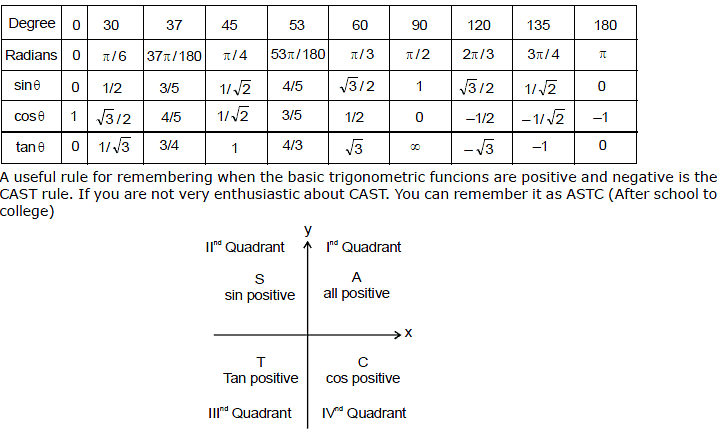 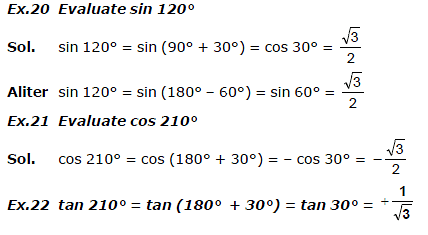 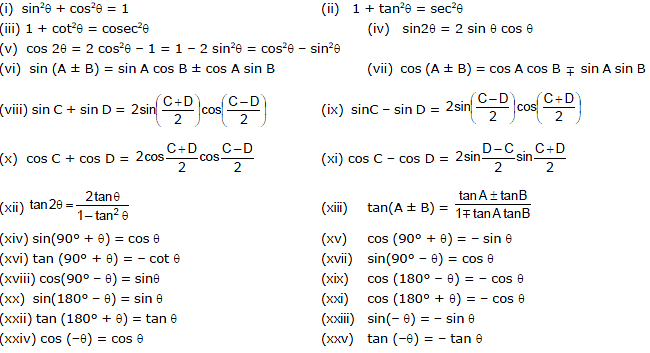 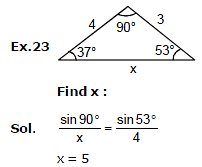 It is a useful simplification which is only approximately true for finite angles. It involves linerarization of the trigonometric functions so that, when the angle q is measured in radians.

for the second - order approximation

Small angle approximation. The value of the small angle X in radians is approximately equal to its tangent. 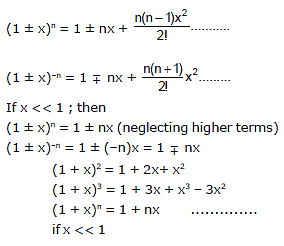 (2) When n is a negative integer, expansion will have infinite terms.

(3) When n is a fraction expansion will have infinite terms.

Following graphs and their corresponding equations are frequently used in Physics.

(i) y = mx, represents a straight line passing through origin. Here, m = tanθ is also called the slope of line, where θ is the angle which the line makes with positive x-axis, when drawn in anticlockwise direction from the positive x-axis towards the line.

Note : That y = mx of y ∞ x also means that value of y becomes 2 time if x is doubled. Or it becomes

and c the intercept on y-axis.

In figure (i) : slope and intercept both are positive.

In figure (ii) : slope is negative but intercept is positive and

In figure (iii) : slope is positive but intercept is negative.

(iii) x = c will be a line perpendicular to y axis

if a < 0 ; It will be a opening downwards parabola. 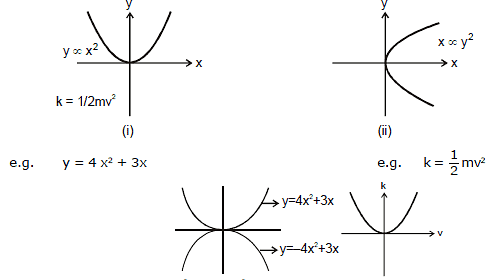 Graph x ∞ y2 or x = 4 y2 is again a parabola passing through origin as shown in figure shown. In this cae if y is doubled, x will become four times.

Two given triangle are said to be similar if

(1) All respective angle are same

or
(2) All respective side ratio are same.

As example, ABC, PQR are two triangle as shown in figure.

If they are similar triangle then 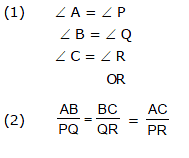