According to the VSEPR model, molecules adopt geometries in which their valence electron pairs position themselves as far from each other as possible. A molecule can be described by the general formula AXmEn, where A is the central atom, X stands for any atom or group of atoms surrounding the central atom, and E represents lone pair of electron.

The steric number (SN = m + n) is the number of positions occupied by atoms or lone pairs around a central atom; lone pairs and bonds are nearly equal in their influence on molecular shape.

2. Repulsions are of the order LP–LP > LP – BP > BP – BP.(a) When lone pairs are present, the bond angles are smaller than predicted.(b) Lone pairs choose the largest site, e.g., equatorial in trigonal bipyramid.(c) If all sites are equal, lone pairs will be trans to each other.

4. Bonding pairs to electronegative substituents occupy less space than those to more electropositive substituents. To the above Drago suggested the following empirical rule which rationalizes the very small angles (~90º) in phosphine, arsine, hydrogen sulfide, etc. and which is compatible with the energetics of hydridization.

5. If the central atom is in the third row or below in the periodic table, the lone pair will occupy a stereochemically inactive s-orbital and the bonding will be through p-orbitals and near 90º bond angles if the substituent electronegativity is ≤ ~ 2.5.

This electron shifting is favoured more if the central atom utilises a hybrid orbital having less s-character. Thus, with the increase of difference of electronegativity between the combining species, the covalency decreases.

In such cases, the central atom uses the hybrid orbitals having less s-character towards the more electronegative bonding moiety, because utilisation of such hybrid orbitals favours the generation of more ionic character. 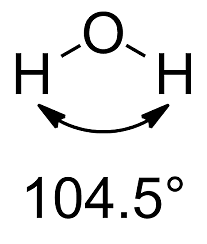 Illustration of the Bent’s Rule :

Besides, the greater s-character in the C-H bonds tends to shorten the C-H bonds. This enhances the bond pair-bond pair repulsion to widen the H-C-H bond angle.

This difference can be explained by considering the Bent’s rule. Fluorine is more electronegative than hydrogen. This is why, fluorine directs carbon to project the s-p-hybrid orbital having more p-character. 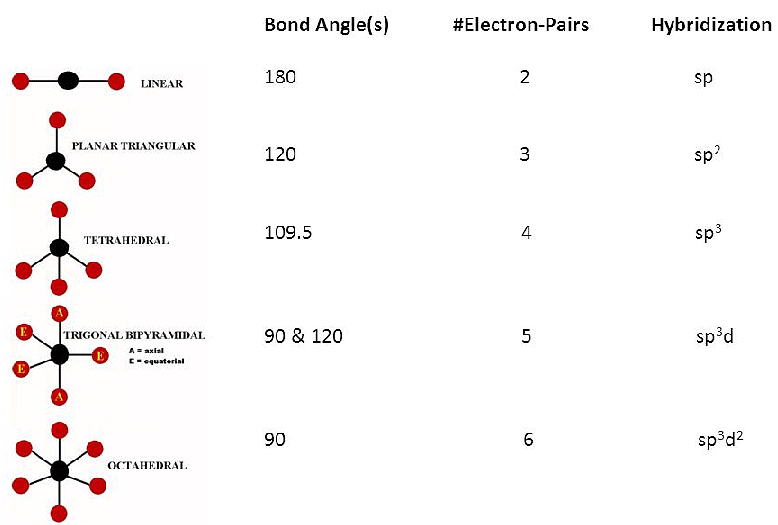 (i) Compounds having steric number = 4: The isoelectronic molecules CH4, NH3 and H2O illustrate the effect of lone pairs on molecular shape. Methane has four identical bonds between carbon and each of the hydrogens. When the four pairs of electrons are arranged as far from each other as possible, the result is the familiar tetrahedral shape.

The tetrahedron, with all H–C–H angles measuring 109.5º, has four identical bonds.Ammonia also has four pairs of electrons around the central atom, three are bonding pairs between N and H and the fourth is a lone pair on the nitrogen.

The lone pair, on the other hand, is concentrated near the nitrogen; it has no second nucleus to confine it to a small region of space. Consequently, the lone pair tends to spread out and to occupy more space around the nitrogen than the bonding pairs. As a result, the H–N–H angles are 106.6º, nearly 3º smaller than the angles in methane.

The same principles apply to the water molecule, in which two lone pairs and two bonding pairs repel each other. Again, the electron pairs have a nearly tetrahedral arrangement, with the atoms arranged in a V shape. The angle of largest repulsion between the two lone pairs, is not directly measurable.

The net result is that we can predict approximate molecular shapes by assigning more space to lone electron pairs; being attracted to one nucleus rather than two, the lone pairs are able to spread out and occupy more space.

(ii) Compounds having steric number = 5: For trigonal bipyramidal geometry, there are two possible locations of lone pairs, axial and equatorial. If there is a single lone pair, for example in SF4, the lone pair occupies an equatorial position.

Fig. The actual structure is distorted by the lone pair as it spreads out in space and effectively squeezes the rest of the molecule together, giving rise to a seesaw shape.

ClF3 provides a second example of the influence of lone pairs in molecules having a steric number of 5. The two lone pairs are housed in the equatorial hybrid orbitals (where the s-character is maximum) and the more electronegative F atoms go preferably to the axial directions (where there is no s-character).

Of course, the third F atom having no other option will have to occupy the third equatorial positions. The distortion from lone pair repulsion causes the axial fluorine atoms to be bent away from a linear arrangement so that the molecule is a slightly “bent T”.

Effect of Multiple Bonds: The VSEPR model considers double and triple bonds to have slightly greater repulsive effects than single  bonds because of the repulsive effect of p electrons. For example, the H3C-C-CH3 angle in (CH3)2C=CH2 is smaller and the H3C-C=CH2 angle is larger than the trigonal 120º.

The d-compounds of steric number 5, SF4, BrF3, and XeF2. Also multiple bonds, like lone pairs, tend to occupy more space than single bonds and to cause distortions that in effect squeeze the reouble bonds to oxygen in SOF4, ClO2F3 and XeO3F2 are all equatorial, as are the lone pairs in the matching st of the molecule together.

The atom with larger electronegativity draws the electrons towards itself and away from the central atom, reducing the repulsive effect of those bonding electrons. Thereby decreasing bond angle

Table: Shape of some molecules having stereochemically active lone pairs according to VSEPR theory

Comparison of bond length (i) More than no. of electronegative element, bond length decreases.

Bond length of N–H & N–F are not comparable

Isoelectronic Principle Isoelectronic species usually have the same structure. This may be extended to species with the same number of valence electrons thus NH4+, BH4– & CH4 are tetrahedrals and CO2, N3– & NO2+ are linear.