The document Value Based Questions- Introduction to Trigonometry Class 10 Notes | EduRev is a part of the Class 10 Course Mathematics (Maths) Class 10.
All you need of Class 10 at this link: Class 10

Q1. A group of students plan to put-up a banner in favour of respect towards girls and women, against a wall. They placed a ladder against the wall such that its foot is at a distances of 2.5 m from the wall and its top reaches a window 6 m above the ground.

(i) Find the length of the ladder. (ii) Which mathematical concept is used in this problem? (iii) By putting up a banner in favour of respect to women, which value is depicted by the group of students? 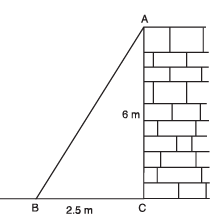 Thus, the length of the ladder is 6.5 m.(ii) Triangles (Pythagoras Theorem)(iii) Creating positive awareness in public towards regards to women.