The document Value Based Questions- Triangles Class 9 Notes | EduRev is a part of the Class 9 Course Class 9 Mathematics by Full Circle.
All you need of Class 9 at this link: Class 9

Question 1. In a group-discussion on “Save Water” five students Shagun, Preeti, Deepak, Nitin and Piyush are possitioned at A, B, C, X and Y respectively as shown in the following figure such that AB = AX = BX and AC = AY and CY. Also, ΔABC is an equilateral triangle.

(ii) Which mathematical concept is used in the above problem?

(iii) By arranging a group discussion on ‘save-water’, which values are depicted by the school? Solution. (i) Join BY and CX.

Question 2. Rajat and Shankar live together at B. Their work places are at A and C respectively, such that A, B and C form a triangle. BD, the bisector of ∠ABC, meets AC at right angle. Various distances are expressed in terms of x and y as shown in the following figure. They use bicycles instead of cars to go to their work places: (i) Find the distance between ‘A’ and ‘C’. 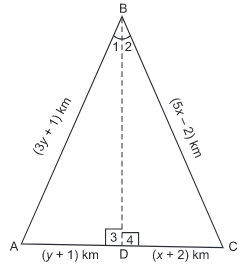