Q1. A farmer was having a field in the form of a parallelogram PQRS. He divides it into three parts ∆PSA, ∆PAQ and ∆QAR such that AS = AR. He sows wheat in the triangular part PSA and donates the product to an orphanage.(a) What part of the parallelogram PQRS is the triangular field PSA?(b) Which mathematical concept is used in the above problem?(c) By donating wheat products to an orphanage which value is depicted by the farmer?

(b) Areas of Parallelograms and Triangles

Q2. A villager Itwari has a plot of land in the shape of a quadrilateral ABCD. The Gram Panchayat of the village plan to take over a portion of his plot from one of the corners to construct a charitable Health-Centre. Itwari agrees to the above proposal with a condition that he should be given an equal amount of land in lieu of his land adjoining his plot so as to form a triangular plot. (a) Explain how the above proposal will be implemented? (b) Which mathematical concept has been covered in the above problem? (c) Which values are depicted in the above plan? 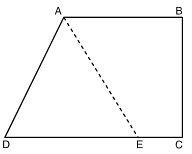 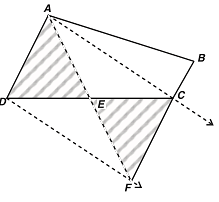 Q3. Ranjeet was having a field in the form of a parallelogram PQRS. He divides it into three parts by taking ‘A’ on RS and joining it to ‘P’ and ‘Q’. Such that:

(i) One part is exactly half of the given field.

(ii) In the remaining two parts, he wants to sow wheat and pulses separately and donates their products to an orphanage.

(a) How the above plan can be implemented?

(b) Which mathematical concept is used in this problem?

(c) By donating the product of two parts wheat + pulses to an orphanage, which value is depicted by Ranjeet?

Q4. Rahul has a triangular plot ABC. He wants to divide it into 4 equal triangular parts. He donates one of the triangular parts containing the vertex ‘A’ to the residents welfare society for constructing a charity health centre unit. 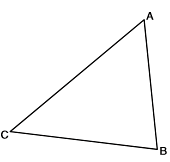 (a) How the above plan can be implemented?(b) What is the ratio of the donated part to the remaining part of the plot?(c) Do the remaining three parts taken together form a trapezium? If yes, then name it.(d) Which mathematical concept is used in this problem?(e) By donating a part of his plot for a charitable health centre, which value is depicted by Rahul?

(a) Let us mark D, E and F as the mid-points of AB, BC and CA respectively. Since, in a ∆, a line joining the midpoints of any two sides is parallel to the third side and half of it. 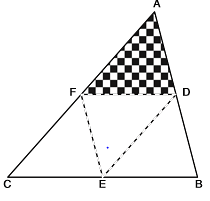 (c) ∴ DF ║ BC ∵ BCFD is a quadrilateral having one pair of opposite sides as parallel.Thus, BCFD is a trapezium.

(d) Areas of Parallelograms and Triangles.

Q5. Praful has a piece of land ABCD which is in the form of a parallelogram. Ashok has a plot (triangular in shape) BOE adjoining to Praful’s land, such that AB = BE and BO = CO.A welfare society plan to open an Adult-Education Centre in Ashok’s plot. Ashok agrees to exchange it with another triangular plot of the same area. Praful allows donating a triangular piece along DC to be exchanged with Ashok’s plot.(a) How the above plan can be implemented?(b) Which mathematical concept is involved in the above problem?(c) By helping the welfare society in making its plan feasible, which values are depicted by Ashok and Praful? 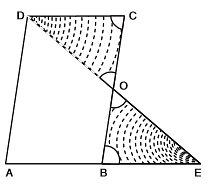